A Sliders fanfic by Yablo

Panic and bewilderment were quickly replaced with critical analysis once it hit Quinn that all the Colins were wearing different kinds of clothes. At first he'd assumed Colin had somehow been replicated in the accident, but it was obvious from the clothing this was not so. The Colins were dressed in everything from the latest in Amish fashion to togas, with a wide variety of jams, levis, suits, and tank tops in between. A few even had on what looked like pajamas and swim trunks. The oddest thing was just how many different kinds of hairstyles these Colins sported. There were mohawks, ponytails, crew cuts, waist length with headbands, and several with their heads completely shaved.

"So," Remmy sidled up to Quinn in what he thought was a rather inconspicuous way, "have you figured out what's going on yet?"

"Yeah," Quinn breathed grimly back. "I think that every Colin who happened to be in a wormhole at the precise time we slid were somehow jerked to our vortex and dumped here all in one spot." Quinn looked like his eyes would pop out.

"Never dreamed I'd seen him in a dress," Remmy raised his eyebrows and shook his head, hands on his hips. "Where's our Colin?"

"I don't know, I though he'd come looking for me in all this, but I don't see him anywhere."

"Do you remember what he was wearing?"

Quinn made a 'who knows' face and shrugged. "All I know for sure is he had to have those toe socks..."

"You know, pants and a jacket."

Quinn and Remmy gave up and just stared. There had to be at least 50 jackets identical to Colin's milling in that crowd.

And one of them finally broke through the crush of bewildered Colins and came toward them.

"Oh, man, are we glad to see you!" Remmy gushed, grinning from ear to ear. Nonstop tension was a little hard on Rem sometimes, and he countered it with jubilance on shorter notice than anyone else Quinn had ever met. But Quinn didn't smile.

"Toe socks," he demanded, not moving.

"What?" Colin stopped and looked puzzled.

"Take off your shoes."

"What? Wait a minute,  you're not my Quinn, are you?" Colin drooped. He'd been swallowing down is own rising panic, but the only Quinn in sight apparently wasn't the brother he'd come to know so well. It was hard not to give in to a sense of overwhelming self pity, but at the same time he was feeling pretty angry about whatever had caused this freak accident. Surely it had to be SOMEbody's fault. He'd gone through nearly 100 slides without any problem whatsoever, so this has to be someone jerking the physics around like a real idiot.

"What happened in there?" At least Rem was keeping a cool head. Quinn was gritting his jaw so hard he thought he might break a tooth.

"I was in the vortex and felt like something punched me. Next thing I know there's all kinds of mes and we're all tumbling out of the vortex. Some of the guys were talking about it, we all pretty much had the same experience."

"Well, Quinn here thinks you may have all been jerked out of the other wormholes simultaneously."

"What in the world could cause that?"

Quinn shook his head. "That's just it, I'm racking my brain and the answer I'm getting scares me."

"Like somebody finding a way to synchronize the wormholes or something? I was thinking it felt unnatural."

"No," Quinn tried not to sound shaky. "It's more than that. Someone was able to focus on a person in the wormhole."

By now a small throng of Colins had gathered around to listen.

"That's just what I was thinking," Remmy added. "But how could they do that unless we had," Remmy managed to convey going quite pale, "tracking devices!" he gasped out.

Colin pulled Quinn aside, which was hard to do in the throng abuzz with conjecture. "I don't think that's it," he said.

"Well, maybe it's part of it," Quinn confided, "but whatever happened, my brother disappeared completely. And there's this new guy." He nudged the unconscious stranger gently with his foot. "Whatever the Kromaggs might be up to, I doubt if they know anything about this guy. The way he screamed, it's a pretty good guess he's never been sliding before. When he wakes up, maybe he can clue

And that is where I'm missing a page or possibly even a section. Sorry about that. There is more coming.

A Sliders fanfic by Yablo

Unbeknownst to evil Dr. Geiger, he had an identical double on an identical world who was working on an identical experiment. The only difference was that the other Geiger wasn't worried at all about finding a medical cure...

Our intrepid heroes had doubles who were about to slide, covering each other during a spray of bullets as they escaped. They barely made it into the vortex before energy started crackling all around them, like streaks of lightning crackling around a little globe in a novelty shop. One of the bolts caught Colin right in the stomach and immediately split into a sheath of energy that encase him. Everyhair on his head and arms stood straight out, and suddenly... Another bolt shot crosswise into the sheath and fragmented into a thousand pieces. Colin felt like he was looking into a long line of mirrors, all reflecting Colins back at him with most astonished looks on their faces. But before there was time to even spare a thought on it during the crazy tumbling this vortex was putting him through, he bumped horribly into another body, melted into it, was swallowed up by it, *was* that body. It was almost like the time he nearly drowned in the pond over in Brenton's alfalfa field when he was twelve, almost like falling asleep when the struggling was over. Only it was also horribly like waking up from a nightmare and not being able to recall for a few hair-raising moments what was going on.

Remmy watched in stunned silence as Colin after Colin dropped out of the vortex. Somewhere underneath them were Quinn and some other guy Rem had never seen before, but one strange guy turning up didn't hold a candle to the hundreds and hundreds of Colins tumbling out of a hole in the sky like a bunch of lemmings in the pc game he'd discovered 3 slides back. He'd gotten so hooked that he'd had to be dragged away from it for the next slide.

And now there were a thousand Colins rolling off an assembly line, virtually dumped like a herd of little lemming guys.

Maggie popped out last, just as the vortex closed back up. She rolled down the small hill of Colins she had flopped onto, stumbled through the ones picking themselves up around the edge, and clutched her head with both hands, squinting her eyes tightly shut. "I have the WORST migraine! Oh, man," she gasped, "I've never had a headache like this in my life!"

Remmy helped her find a place to sit down and recover while the Colins sorted themselves out and stood up.

Quinn looked around like a wildman once he'd fought his way out from under the first dogpile. What in the world was going on? Why were there suddenly so many Colins? And which one was HIS Colin?

The new guy just screamed until he fainted. 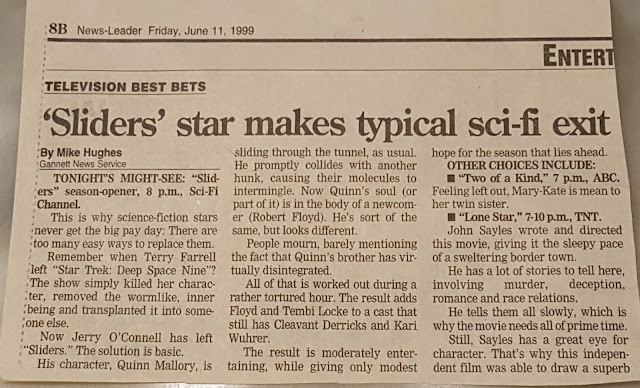 I've mentioned a few places across my blogs that I was a Sliders fan, and back then I was YabloVH on Onelist. I was digging through an old tub of junk and ran right into proof that I ran the Quinn list on Onelist. 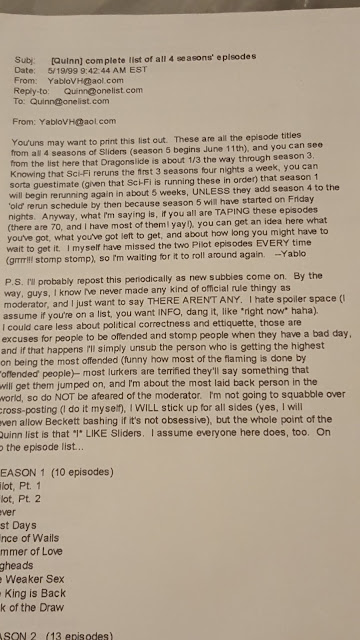 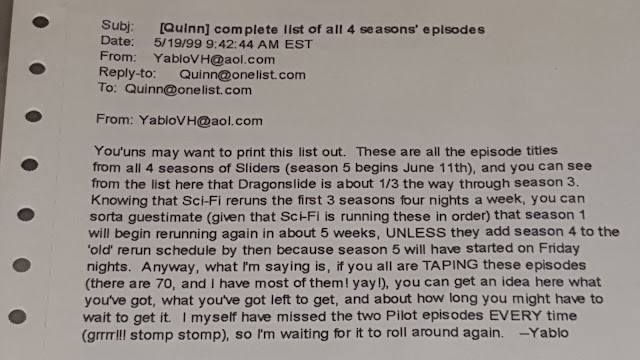 I also have proof I shared at least one of my fanfics to the Slidestory Onelist group. 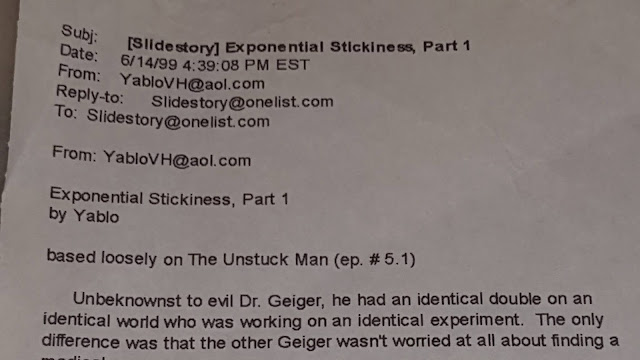 So I'm going to copy my Sliders fanfic series onto pinky blog (next post) and SyfyDesigns.