I have occasional assessments among the 1181 currently published posts here, blogger view count currently at 136,687.

I stringently control for as much ping, spam, and bot crawlers as I can, and I exclude myself from this count on all trackers.

I won't repeat stuff I've said in other posts about analytics, but you can click that if you're a numbers junkie. There are currently 22 posts in that tag search.

I simply want to say thank you. I'm not monetized or affiliated with content curators, although I am picked up once in awhile around the world. Just under half my traffic is raw search engine referrals for specific words, phrases, or images, a little over a quarter is link driven through other personal medias, and the rest are regular subs, readers following tag paths, and data miners.

One of my trackers keeps count of visits by several filters, and it is extremely stringent, apparently ignores a bit because it got hacked after they allowed GWT into their analytics, so these numbers don't reflect total incoming. They do, however, pretty accurately reflect comparative volume, keeping in mind that I'm using 'pageloads' count here and not 'visits'. These are actual pages opened up with real referral incoming, but not a total count of direct bookmark hits. (I actually get a LOT of those.) These are the people I want to say hi to, and thank you for checking on Pinky blog. I got a few South American hit referrals after I live tweeted Olympics one year that wound up going viral and being quoted in a news article, but other than that, some of the variation are from fans and 'cast and crew' finding my TV show and other entertainment yap. I also pull in a few over politics, but it's really tame and I'm quite happy about that. Btw, no idea what ** is and it doesn't show me anything about it. I'd also thank direct linkers and curators, but I really can't see who sends me traffic bursts most of the time.

Not a clue how 'Satellite Provider' qualifies as a country, but I can see those, and it's not me or my own satellite provider. I get no location info with that, just IP that bounces.

That being pasted, Blogger begs to disagree and says this is my all-time top ten, but it doesn't let me see beyond that. I beta tested Google analytics, but that was facepalm fail and I don't care to pay for that. 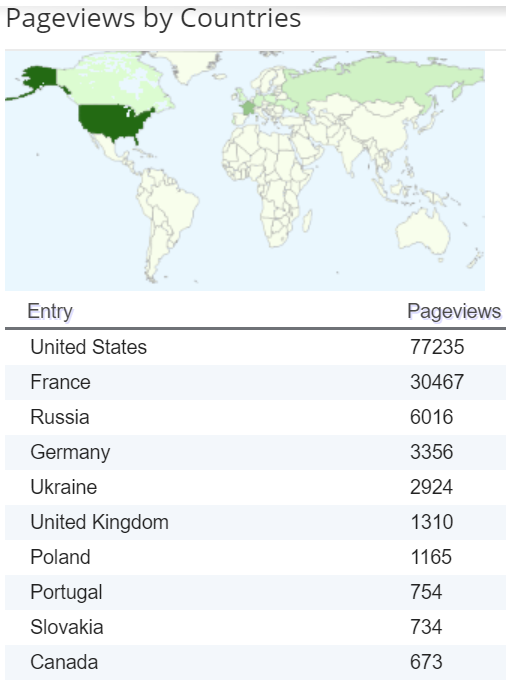 I usually combine the 2 trackers and sometimes toss in a 3rd and 4th for kicks, but generally, this is from the daily incoming I see on blogger. I don't get IPs or anything, but I do get referrals, and I can sometimes cross the trackers and see exactly what is going on. The outside tracker shows me the read trails, blogger shows me how many people are hopping on from shared link stuff, usually about autism or depression, once in awhile more deep thinky world stuffs.

I joke about how I should write fanfiction for Rick Lagina because he's pretty much in my top 5 referral material, but I could easily triple and quadruple without him simply by blogging gossip and airing dirty laundry, which I don't like doing. Pinky blog has been thoroughly combed by a few deep searchers completely unrelated to me, but no one ever really contacts me about stuff because I won't answer. They used to.

Basically, I'm not out here for numbers. I'm out here for *me*, because blogging helps me deal, and public blogging challenges me to deal better. I am, however, very surprised to see this much traffic. I play around with self linking on medias and building up web presence, but I don't pay for these things like many do, and I'm relaxing so much now that I don't push through out of desperation like I used to. And still people read.

THANK YOU. 💖 It's very encouraging when I'm plummeting a bit to see that something important that I wrote two years ago still matters to someone now.

We are all important. We are all here to solve something, to be someone, and to conquer a challenge. I wish you all the best in your endeavors.