Some of these are from private blogs.

My fave story-- 2007 Personal Account: Stirring Up the Wasp Nest
The following is going around, thought I'd grab it.

I AM THANKFUL
FOR THE WIFE
WHO SAYS IT'S HOT DOGS TONIGHT,
BECAUSE SHE IS HOME WITH ME,
AND NOT OUT WITH SOMEONE ELSE.

FOR THE HUSBAND
WHO IS ON THE SOFA
BEING A COUCH POTATO,
BECAUSE HE IS HOME WITH ME
AND NOT OUT AT THE BARS.


FOR THE TEENAGER
WHO IS COMPLAINING ABOUT DOING DISHES
BECAUSE IT MEANS SHE IS AT HOME,
NOT ON THE STREETS.


FOR THE TAXES I PAY
BECAUSE IT MEANS
I AM EMPLOYED.


FOR THE MESS TO CLEAN AFTER A PARTY
BECAUSE IT MEANS I HAVE
BEEN SURROUNDED BY FRIENDS.


FOR THE CLOTHES THAT FIT A LITTLE TOO SNUG
BECAUSE IT MEANS
I HAVE ENOUGH TO EAT.


FOR MY SHADOW THAT WATCHES ME WORK
BECAUSE IT MEANS
I AM OUT IN THE SUNSHINE.


FOR A LAWN THAT NEEDS MOWING,
WINDOWS THAT NEED CLEANING,
AND GUTTERS THAT NEED FIXING
BECAUSE IT MEANS I HAVE A HOME.


FOR ALL THE COMPLAINING
I HEAR ABOUT THE GOVERNMENT
BECAUSE IT MEANS
WE HAVE FREEDOM OF SPEECH.


FOR THE PARKING SPOT
I FIND AT THE FAR END OF THE PARKING LOT
BECAUSE IT MEANS I AM CAPABLE OF WALKING
AND I HAVE BEEN BLESSED WITH TRANSPORTATION.


FOR MY HUGE HEATING BILL
BECAUSE IT MEANS
I AM WARM.


FOR THE LADY BEHIND ME IN CHURCH
WHO SINGS OFF KEY
BECAUSE IT MEANS
I CAN HEAR.

THE PILE OF LAUNDRY AND IRONING
BECAUSE IT MEANS
I HAVE CLOTHES TO WEAR.


FOR WEARINESS AND ACHING MUSCLES
AT THE END OF THE DAY
BECAUSE IT MEANS I HAVE BEEN
CAPABLE OF WORKING HARD.


FOR THE ALARM THAT GOES OFF
IN THE EARLY MORNING HOURS
BECAUSE IT MEANS I AM ALIVE.

Wishing Everyone a Safe n

Happy New Year
To you All

So for lunch (it's almost 11:30 now) I'm going to toss a sweet potato into the microwave and just eat that.  Nothing else sounds good at all.

Changed my mind.  I'm attempting to make sweet potato fries.  I love getting those at Buckingham's.

Ok, those were awesome, they are my new winter junk food, and I'm going to eat at least one sweet potato a week.  I fried those up in half olive oil, half canola oil, didn't even salt them, and they were ~awesome~.

On 12-31-09 Sorry if this is hard to read, xanga's html hash is gobbledygook in my editor and I don't feel like manually fixing it bcuz composer can't override, really loathe WYSIWYG bandaids slapped over existing html, grumblegrumble

Keep saying no to dog-sitting.  Remain firm.  Be harsh if I have to.

Stop cooking so much for other people in other houses.  That has become a really bad habit.

Stop automatically responding to people asking me to do things.

No more magazines.  They are an illusion that clog up the drain in my brain.

Pay Rush so I can see him broadcast live online, like the rest of the homebound lonely people with no lives.

Save up to fix up a Christmas tree bird feeding station on the deck next year.  This will include a catch 'em live trap for squirrels during squirrel season, heh heh.

Cook a real lobster that is alive when I bring it home.  I don't like lobster, but Scott got a little excited when I told him this one.

Become one with the pellet gun.  Become a killer.  Cull the woodland critters that eat my chicken feed and scare my chickens.  Tack their little pelts up like some kind of lunatic.  Ok, no, I probably won't go that far.  But I *will* try to blind and maim stray dogs and cats, because I'm that mean and show no mercy.

Shop for real clothing.  Two years in one pair of jeans is 'wearing thin', as it were.  I need exotic t-shirts that you can't buy in a store.  (For instance, I need # 15 just to be droll-  Funny Math T-shirts)

Devote my year to digging up utterly useless trivia, such as everything Mike Nelson, i.e. Rifftrax, the old MST3Ks, books, etc.  I need psychological help from the best of the best.  Get Crow and Servo t-shirts, or dolls, or whatever there is out there.

Digging up all the Terry Pratchett books out there might not be a bad idea, either.

Marathons such as Stargate Atlantis should be scheduled in every other month.

Roll out a Christmas plan that will take all year to complete, like a wedding plan.  Make a hobby of it and enjoy it, even if it turns me into a sinister obsessive freakazoid.

Put together an album of all the food pictures I've taken through the years.  I do not need a reason why.

Start a hate list and see how long it gets.  Such as, "I hate people who are obsessed with flies to the point that nasty flyswatters touch every surface in sight and splatter guts and body parts and sometimes a thousand nasty eggs through the air."  I think that's a pretty good one to start with.  And then give a reason for the hate, like "Stupid people swatting flies are much nastier than flies being flies."  And then for trivia facts, I can give where the hate comes from, such as "I once had a boss who swatted a fly right in front of my face and I was spattered and nearly threw up in front of a customer while I picked it off my skin and clothes."  I think at this point in my life, it might be good for me to really air out the ol' grievances.

Consider what a giant and very complex rodent maze would do for my life down the road.

Get back into youtube fanvids.  They cheer me up.

Dare I even hope I get off the stinkin' xanax?

earlier than I thought

Ok, here's the weather forecast.  SW MO will be on the leading edge of a prolonged ~severe~ clash between the jet stream and two other fronts that will probably make it nearly to the east coast.  We'll be hit any time after midnight, most likely before dawn, should all be over by 10 a.m. in my area.  I've got candles set out all over the house ready to light.  Finishing up laundry right now, just in case we lose electric, won't have to worry about having clean jeans and stuff.  Thought I'd say all this in case a transformer gets ripped up and I can't get back online or something.

(note- person we knew with PTSD probs, no one was sleeping for awhile, and this a short month after a very nasty scary accident that nearly took a family member)


Slept. Hard. That's good sleep two nights in a row with naps in between.

Woke up to heavy snow showers on top of frozen rain. Supposed to continue through the day. I'm loving it, but hope we don't lose electric.

Now I hover around 193 all the time, so I've gained over 10 pounds back, and most of that has settled in over the last 8 weeks and it never goes back down, about the time my stress went through the ceiling and then I crashed back down again. Time to start dealing with it and trying to get active again. Going to be a challenge, both my feet ache around my ankles and other joints because of the weather, so walking is out. I'll have to start doing my stretches again, maybe start doing some light upper body core work with the stretchy band. Start out slow, but I've gotta commit again. Thinking about writing a nerdist post on slacking back into being wimpy.

So happy new year in Australia, I think Xander Bennett just left on a plane again, but it would be midnight where he lives in Sydney about now. He's my fave writing inspiration. Script Frenzy, plus nearly every day he writes a one-sentence piece of advice on twitter. Also, another one of the authors that follows me wrote this bit about getting published, and it looks like solid advice, so I saved it. Some Advice To New Or Aspiring Authors | Michael R. Hicks

Tomorrow is also Colin Morgan's birthday, and they are 6 hours ahead of us over in the UK, so I'll be joining fans later today pushing that to twitter trend just for kicks.

I'll be watching 2013 come around. Time Schedule for New Year 2013. So far New Zealand is done, Australia real quick, Japan after that, etc.

On 12-31-13 I was doing assessment (s) while I was rebuilding my blog empire, very boring, but on new year's day I wrote Spiritual Math for 2014, because Santa died just before Christmas. We had a pretty rough holiday season, but when do we not.

I've decided I don't like popcorn sox. There is so much stretchy string holding all those tiny tuft balls together that it tears up the skin under my feet if I walk around in them too long. I guess I'll be tossing these when spring gets here. 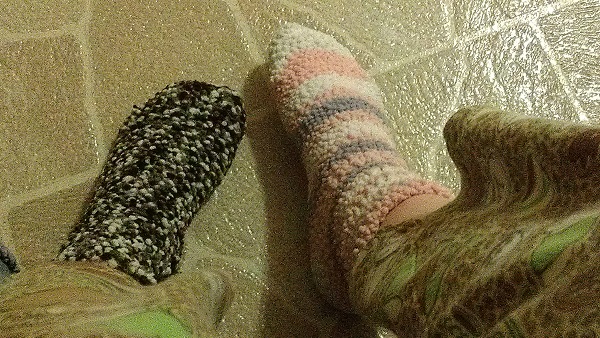 WordPress has a cute little annual report. Wish blogger would do that. My post about +Vicki Addesso's post is my best WordPress post to date, second place continues to be Are you a robot? 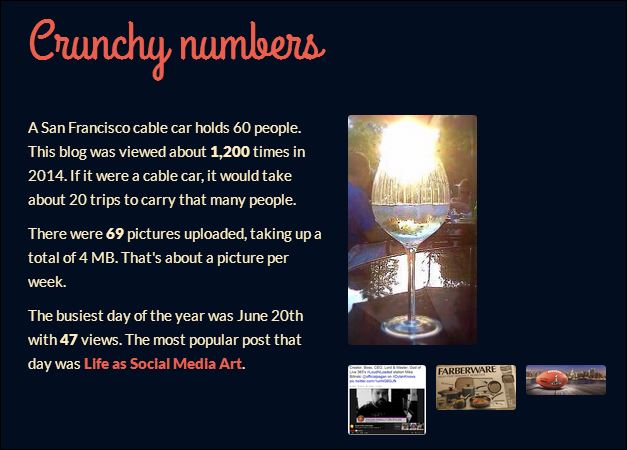 Sorry, not going to turn this into another assessment, egads. I think I was just so surprised last year that numbers were coming back up better than before the blog crash. Anyhoo, for hangers on who keep steadily watching the dotcom for announcements (thanx, u guys absolutely rock), yes I really am in final edit now. Contract says I can go up to 300,000 words, haha. 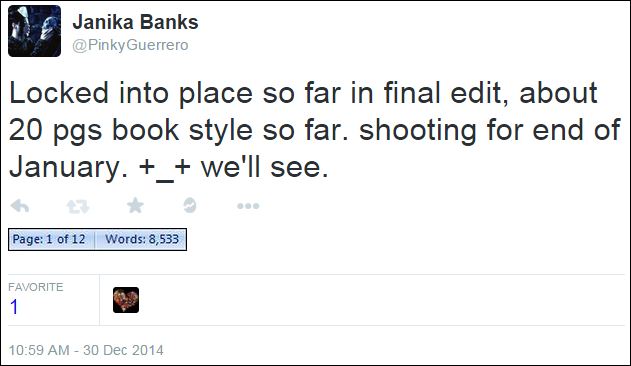 I made resolutions a couple of days ago and still can't get twitter on my phone, might just hafta go get a new phone soon. No plans for tonight. We'll see what happens.