That was 3 years ago, as you can see. That clicks back to the tweet, by the way.

Johnny was best buds with Hunter S. Thompson. Guess what Hunter liked to do.
Hunter S. Thompson Exposed as Child Murderer/Snuff Film Director
Ran into a very shady couple of dots possibly connecting Johnny to a child hunt where by the time they roasted the kill out in the woods, he was ravenous and said something about roasting the kill right after the hunt was the best way to eat it. He never mentioned what was hunted. There are other places to find more on Hunter, as well, who freely admitted that he liked to hunt people. 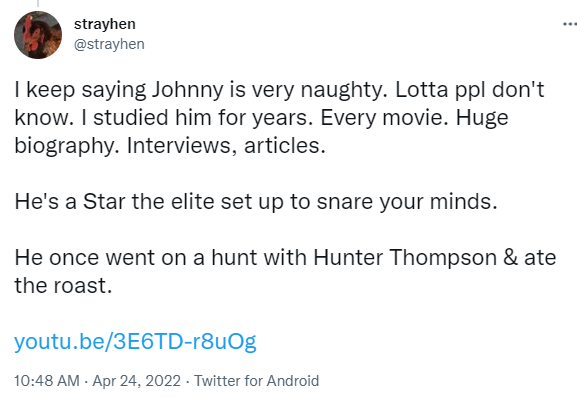 I used to love everything Johnny did. I had all the movies. Read his biography, really thick book. Dug up articles and interviews from all over the world. I knew his film history and all the things he said about it. And then I started finding out rumors were true. Johnny (allegedly, because I'm not going to risk another massive twt & goog kick) killed River Phoenix. Johnny and a host of other Hollywood and music entertainers went to bat in court for a group of Satanist kids. Stuff like that. 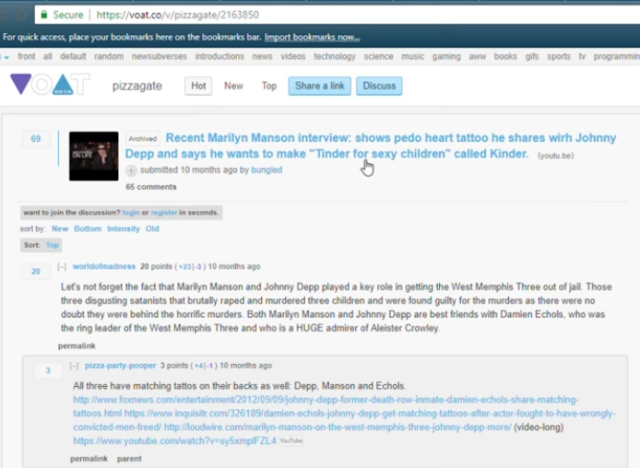 When you go deep, you study movie directors associated with an actor's projects, as well. Tim Burton is one of my faves. Johnny has been extremely loyal to him. For some reason. Oh, I see Tim made this list. 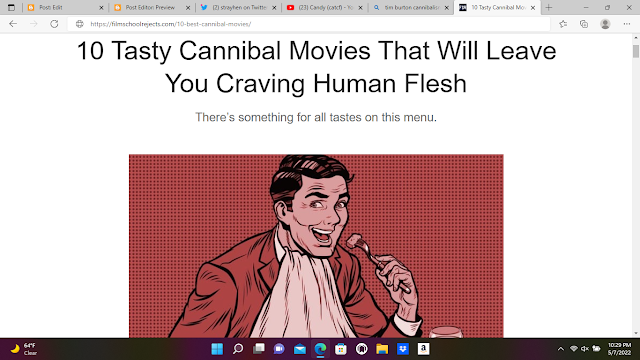 Roald Dahl made it into this list of cannibalism stories through history.
Cannibalism in Storytelling
"Dahl took a macabre delight in cannibalism and other deviance. (Most of it came out in his short stories for adults, but he gave children a taste.)"
Guess what else Dahl wrote. That Tim loved. And Johnny acted in.

I used to keep this on all my blogs. It still holds true, at least for that app. You can click this screenshot to go try it out yourself. 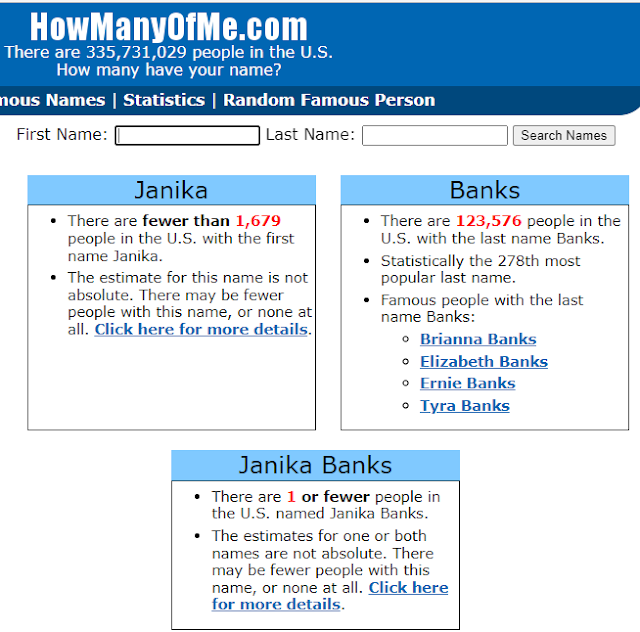 There is some consternation among some that anons remain anon.
Janika Banks has no birth record, at least that I know of.
I created a fictionalized avatar to express myself through. Anyone reading through more recent blogs can affirm I am diagnosed dissociated and deal daily with a rollercoaster mood disorder on top of being on autism spectrum.
Why am I saying this? Because I'm high risk. I'm a mess. High IQ, low EQ, successful in just about everything I have attempted, even with a list of diagnoses with all their spinoffs and complications.
I am not a stupid person. Naive (yes), gullible (regrettably), easy to lead on (literally in my diagnosis), and sometimes dumb as a rock (family nods), but stupid I am not.
Even stepping into a spotlight I have been anon for all the years I've been online. I share what I feel like sharing, what I choose to share, and it looks real enough (based on a true story, as it were), but there was no way I could write an autobiography without bringing slings and arrows on my head. So, I fictionalized it.
In case there is any question about this very scattered free book I've published all over the internet.
𝓛𝓸𝓿𝓮, 𝓟𝓲𝓷𝓴𝔂
Posted by Janika at 6:12:00 AM 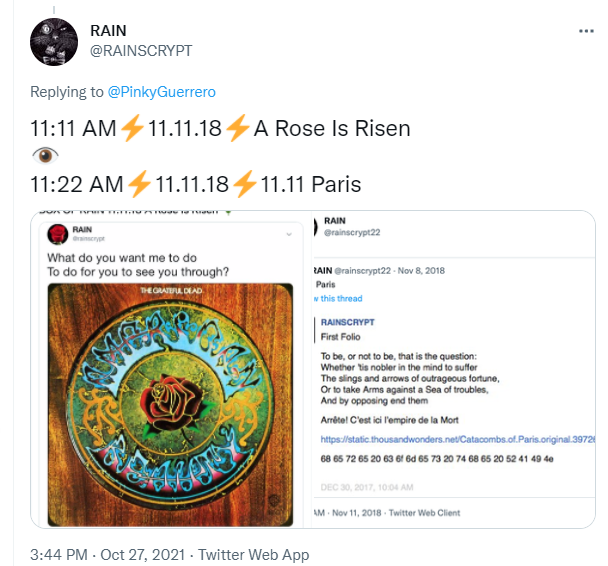 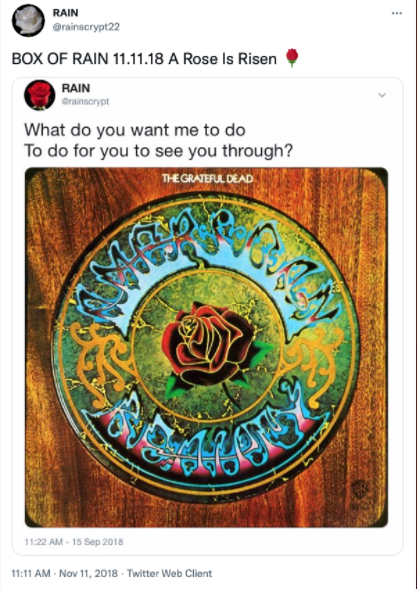 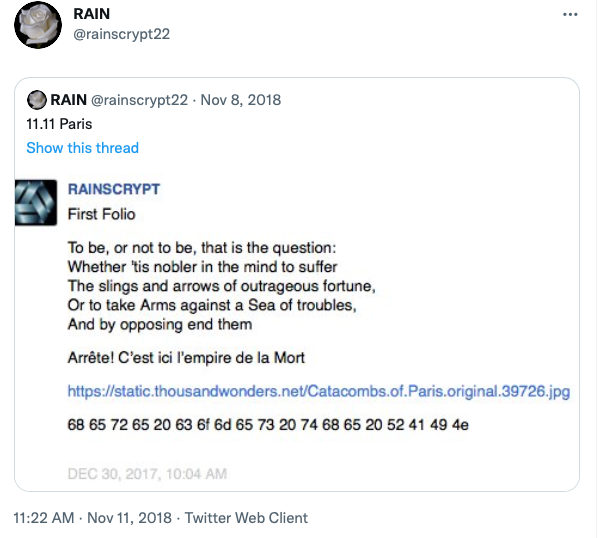 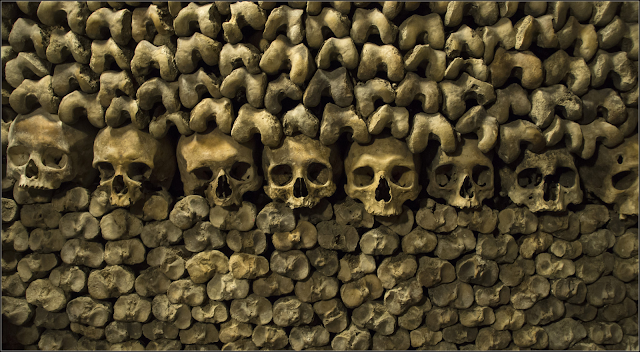 Stop! This is the Empire of Death

Note from Janika aka Pinky- The stacked spines resemble butterflies when seen from this angle. Butterflies are the symbol for shhhh! 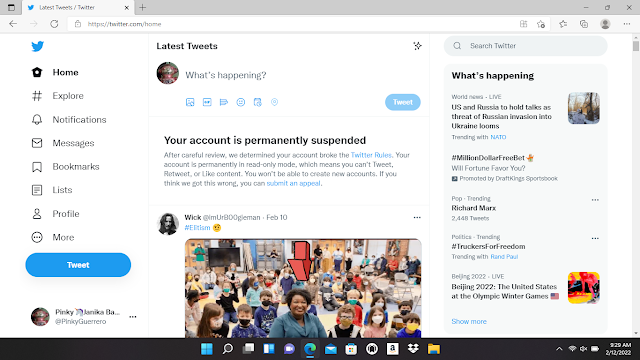 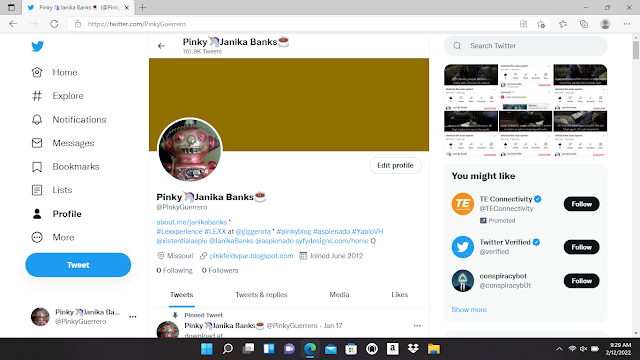 My main twitter account is now read-only, which means only I can see it when I'm logged in. That also means I can still screenshot and snip everything in there and put it onto blogs if I wish. Sooooo glad I save my #TheFlash tweets on this blog. All my hashtags since 2012 are now disabled on that account. If you'd like to keep following me live, I'm at strayhen on twitter, Janika on the truthsocial maga hub, and janikabanks on gettr. I probably won't put out blog links like I've been doing in the past, but it's all hubbed together here in my blog fleet and you can see most recent posts in my right side columns on many of my blogs. Google seems to have removed searchability on me to the point where my blogger blogs no longer come up.

More information about the possible reason for the suspension is on my more current #pinkyblog at https://pinkfeldspar.blogspot.com/2022/02/precession-of-equinoxes.html. I'm working on a follow up post over there with more answers to the original question I asked on twitter that possibly led to my suspension.

I have internal search options on my blogs in the right column that let you look for keywords that help you find posts you might be looking for. My writing goes back years, and there are goodies and tidbits all the way through all of my blogs.

One interesting thing that happened with google removing me from searchability within a couple hours after my twitter suspension (that's pretty vindictive) was getting one of my weird phone calls from still another 'publisher' wanting to talk to Janika Banks. I go into detail about some of these phone calls following my real life around on my other blog at pinkfeldspar.blogspot.com.

This is the second time google has raked me out of their search engines in the last year and a half, and this time was so thorough that it's getting really obvious that I'm way too close to one of the biggest secrets ever now. I'll link the follow up post here once I'm done with it.

I will probably be letting the pinkyguerrero dotcom go. I originally got it for fun, later learned via triangulated statcounters and trackers that I was getting more traffic than a real internet sex slave with that name, announced that I decided to keep the dotcom just to annoy the people farming her for profit, went through several years of doxxing, very specific behind the scenes continual hack attempts and spam hit attacks, and crazy weird phone calls from all over the world including Canada, Spain, Philippines, Mexico, and a number of states in the U.S. attempting to reach Janika Banks for various reasons basically right on top of other very specific things happening on the internet with me. I have proof galore I've been monitored for a very long time. Anyway, money is tight and I simply need to free that up for my personal use.

I've explained in a few places that I am a compulsive speed reading autist with a very nice IQ, and I joined in with anons doing deep digs and sharing researches on twitter. I am one of the people who always knew the internet very well right down to the dregs, so I can affirm all the changes that have been happening. My aspie train obsession is the entertainment industry, who owns it, how they use it to program the masses, and who the slaves and slave owners are. I called the CCP occupation in Canada very early on and have been followed almost religiously by readers in a number of countries for streaming pertinent real time info into an easy to read feed. Well, twitter and google are pretty intently shutting me down now, and it's a good time to go even deeper. I've written and shared some very important things that are spread out on all my blogs, which I used to keep tied together in hashtags on twitter, but those are unreachable now for the public. I discovered thread reader rather late, and even though it was no longer searchable on google or twitter after they suspended that account, my pinky threadreader account was still reachable until I pulled my latest thread onto pinkyblog a couple of days ago, and now they've killed that, too.

It's very possible at this point that all my google owned blogger blogs will be removed from public, wordpress has been really iffy too, and I just want to say that if they do disappear, I'm not the one doing it. My web presence has gone from 6.4 on webmii to 0.0, mostly because they control the search algorithms, partly because stuff is literally being being blocked out. I wrote about being blocked out of my paid wordpress dotcome awhile back the first time one of my twitter accounts got suspended.

I'm not a fly by night tweeter. I had ten years of twitter history removed from public view over something as simple as speculating about the precession of the equinoxes in our entertainment. I'm going to have more to say on that, again, I'll link it when I'm done.

Anyone who's been blog watching me and wondering what's up, grab what you can before it's gone. I won't be reposting all this stuff anywhere else, there's too much and I'm busy. If they're wanting to wipe out Janika Banks this badly, then just grab what you can of everything I've scattered all over the internet. I never dreamed anything I'd do would be this big of a deal, but there you go. I dared to call out Stephen King over being a deep state puppet, now I'm calling out someone else. I've been poking at some pretty powerful people for several years, and I'm finding the lines that we're not supposed to ever step over. I wanna show you guys where this really big line is.

Probably wouldn't hurt to pray for me. 🧡 I love you guys.