the Santa gets abducted by Martians mooby

The facepalms this morning aren't stopping me. DO YOU HEAR ME, COSMOS??? *shakes fist* Just pleeeeeese stop throwing spiders at me while we're at it...

Somebody remind me to have @bonenado move my whole king sized bed after he gets home from work so I can get something that slid down the wall when I flipped a pillow out of my way. That's what I get for setting up mobile office in bed. I'm trying to feel lazy in between jumping up getting tons of stuff done. By 9:30 I had a sack filling up for a charity donation drop off, all our coats in the wash, a pie in the oven, an actual for real phone call about medical billing done, the coin bowl all sorted, couple xmas thingies taken care of, another quarter of my mountainside stripped down in game, and had started a couple of lists.

Just a sec, got all settled and all my little cells are going ~nope~, go eat some lunch first.

comes back with nachos

Ok, now I get to sort through my mangled screenshots folder for the #latenightmove grabs. I attempted to downsize and dumped about half the folder contents last week, and apparently the new incoming fills up the empty slots instead of lumping together at the end, yay, so "Screenshot(10)" isn't really "Screenshot(256)" like it's supposed to be, and the movie grabs are like scattered autumn leaves. Not sure, but I think this makes my third viewing now. Could tell a big difference between this year and years past. If you don't know about my brain crash-fog-glitch probs, 2017 has been my best memory and function year since 2004. 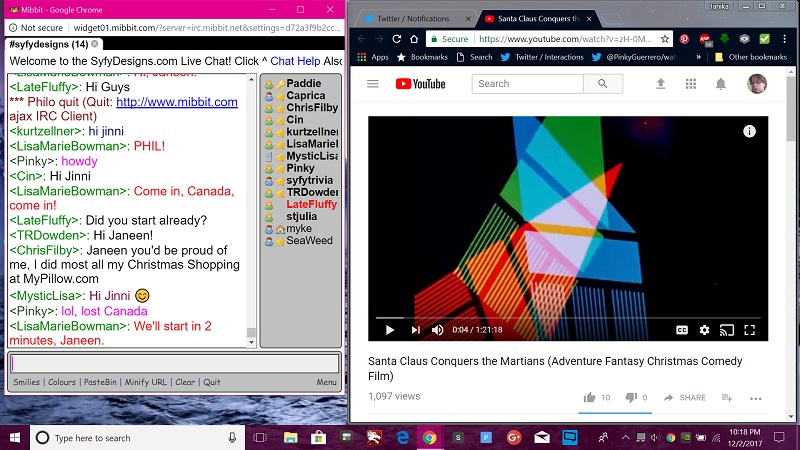 Before Tim Allen ever threw Santa off a roof, long before Elf helped Santa rig a jet engine back onto a sleigh, Santa apparently went to Mars. Pretty sure Elon Musk's parents were inspired by this movie as children, pushing him to be just like little Billy and go to Mars, too. 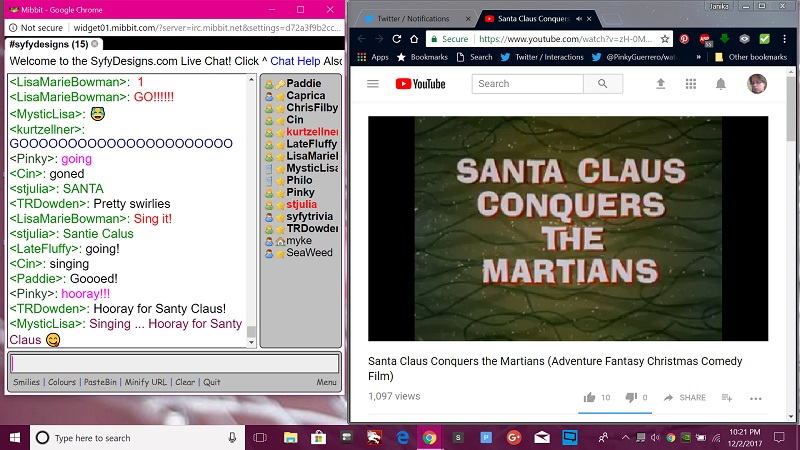 North Pole HQ looks different in every single Santa movie. This one looks ominously like the one in the Scrooged promos showing Lee Majors saving Santa years later during a missile attack. 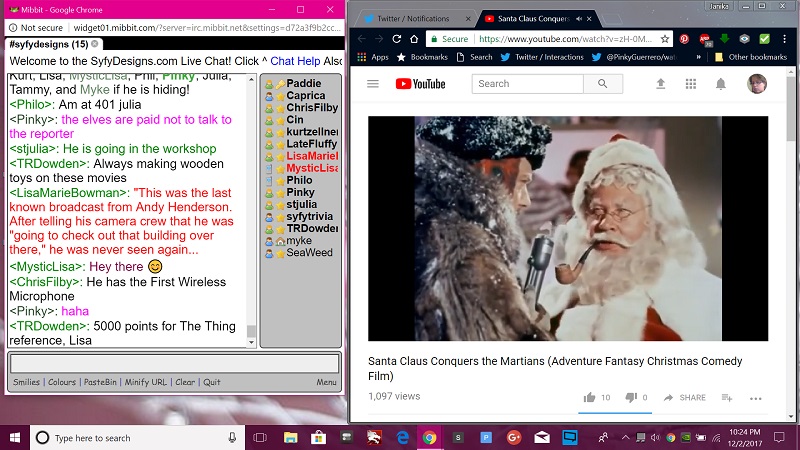 We never did find out what that Martian headgear was about. That still bugs me, along with a very confusing plotline based on an even more confusing motivation. I think that's because I'm used to space shows being a bit more logicky nowadays. I want to slam this one by its lapels against a wall and ask how in the world they figured out their children were lacking happiness? 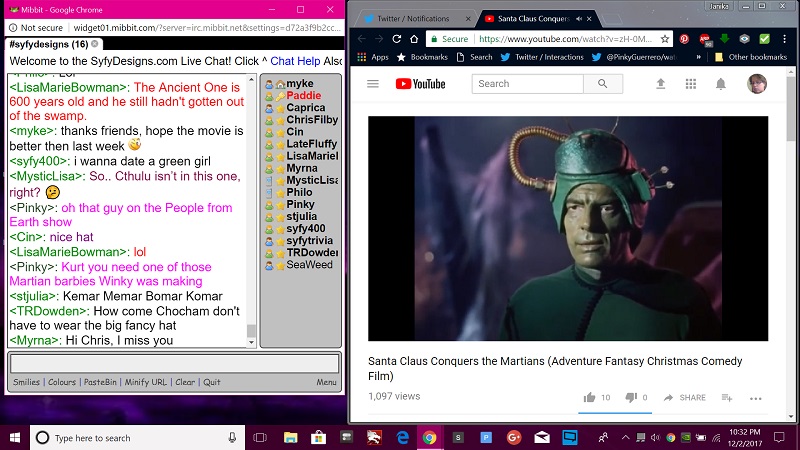 We are ALL still children on the inside. You know it's true, syfy400. I won't reveal your secret identity. 😂 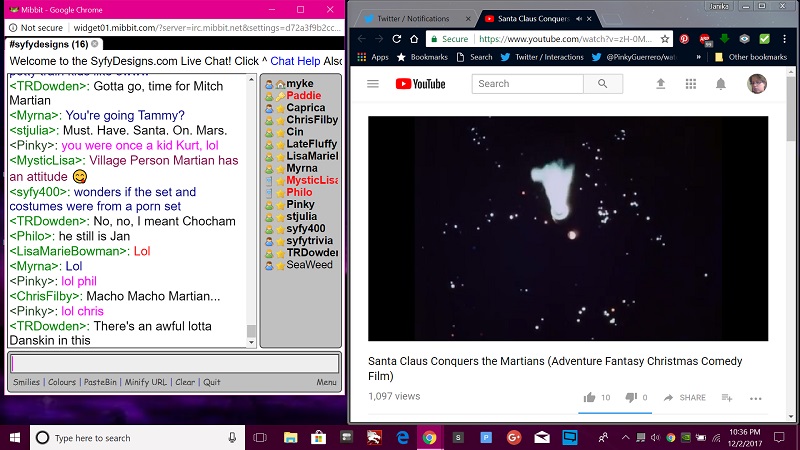 I'm not good at Martian linguistics and proper naming. 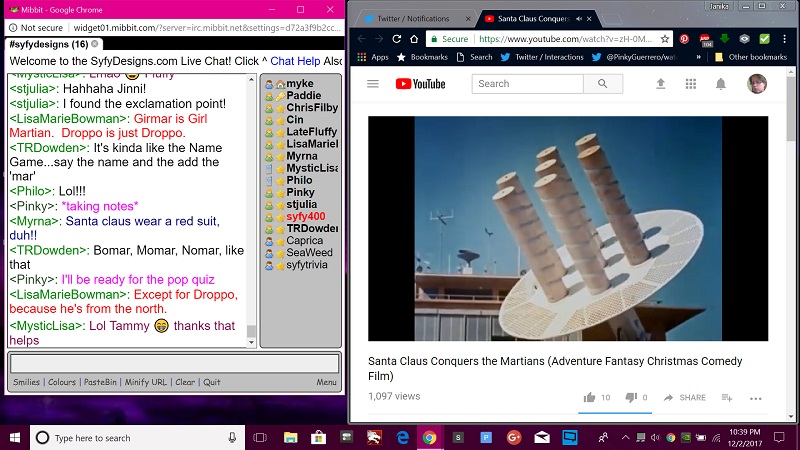 You know how Daryl had to listen to Easy Street over and over? I think Kim Jong needs to see this movie a few times. 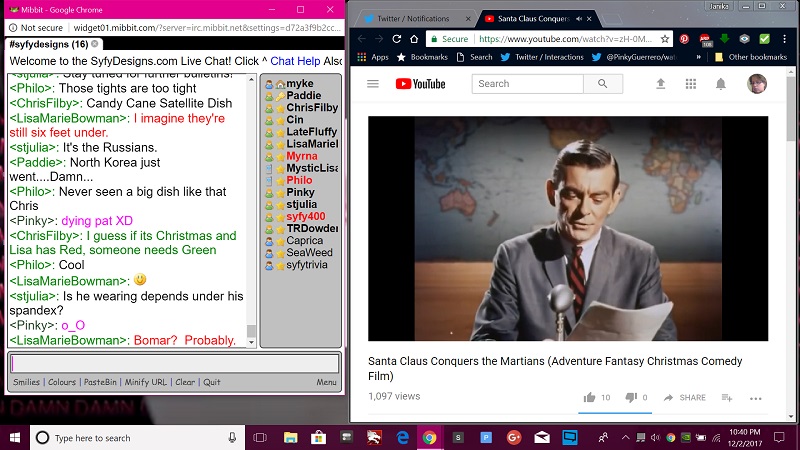 There's like a plot and a subplot behind the entire Santa abduction. Nowadays we'd get up to the minute tweets about staff changes during production, which everyone knows alters the whole atmosphere of a movie, so I can't help wondering if the start and the end are cobbled together in the middle after a long horrible night full of cigarettes and coffee around a writers' table. 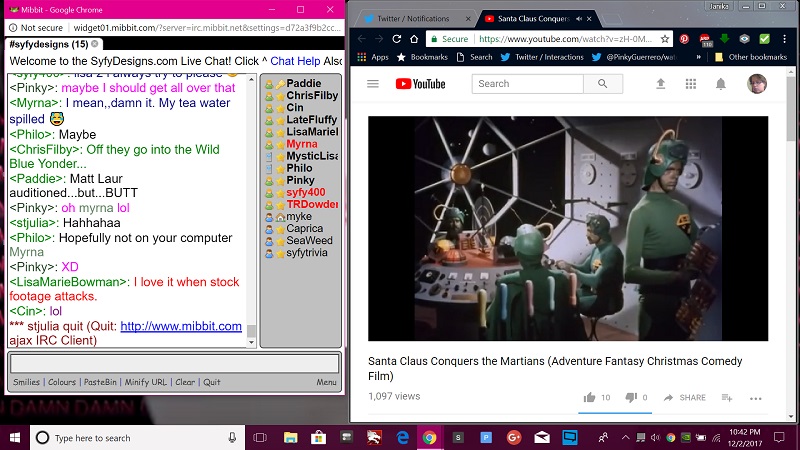 The Martians didn't seem to know how to properly abduct (oddly grazing taboo all around, as it were), and probably only succeeded because children were so terribly polite back then. The only thing missing was candy and 'wanna see my puppies?' The brief gun pointing didn't frighten them at all. Were they brave? Bad actors? Cognizant of the script saying something about a gun? Did anyone know what was going on??? 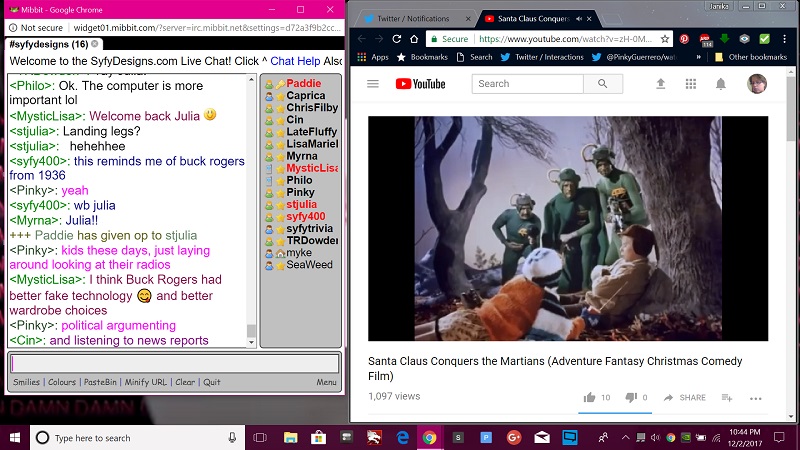 It's up to Billy and Betty to carry the story now! 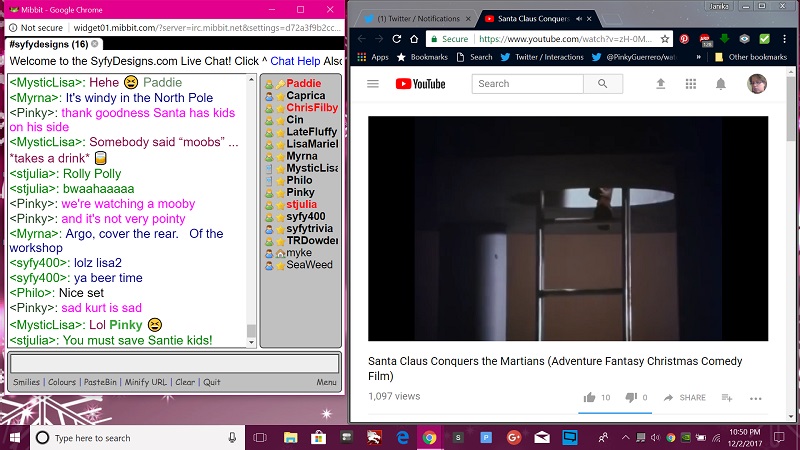 I know right, how many of these did I get this time. Wow, really went to town on that screenshot button. By the way, in case you haven't been paying attention on the medias, Sophia has been granted full citizenship in Saudi Arabia. Inside the mechanical brain of the world’s first robot citizen 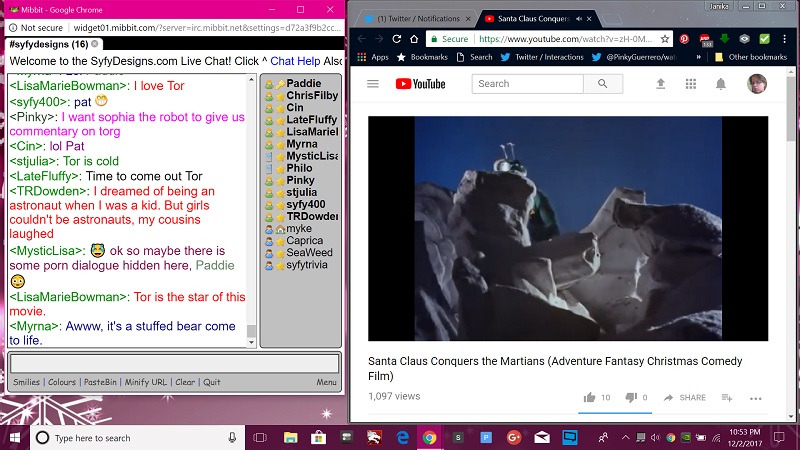 In case you don't know there reference, here you go. Rub Some Bacon On It 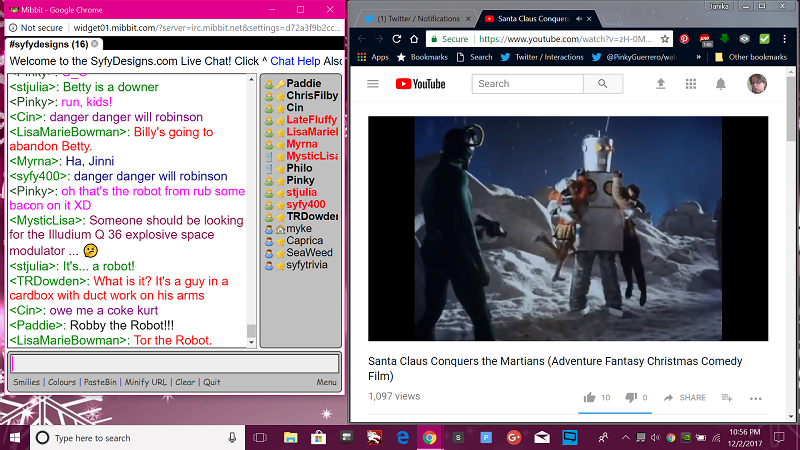 I have no idea what I said. Missed getting a screenshot, lol. 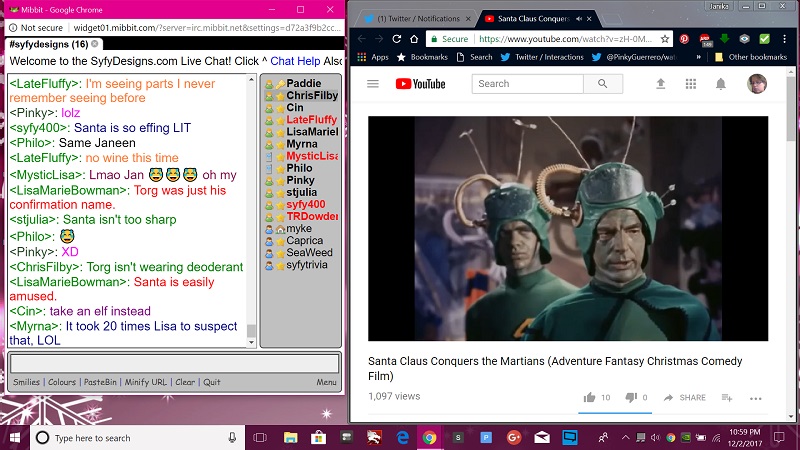 Has anyone ever cosplayed one of these guys at a con? Because that would be hilarious. 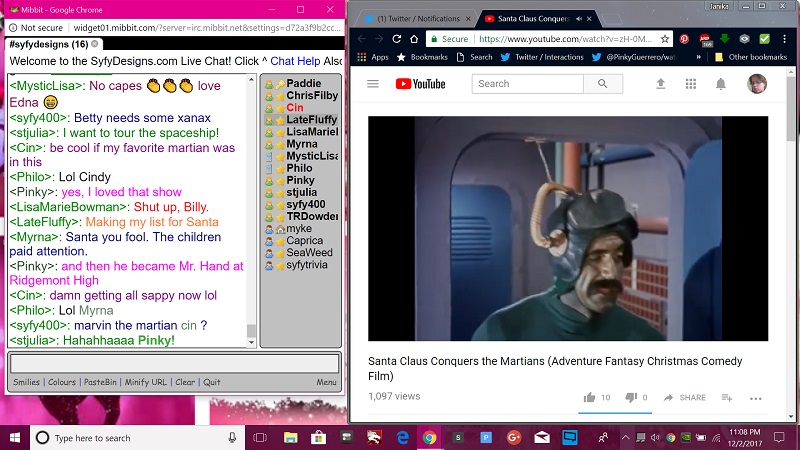 I honestly don't even have a clue at this point. It was like some random person came by and picked up a camera while everyone was on break. 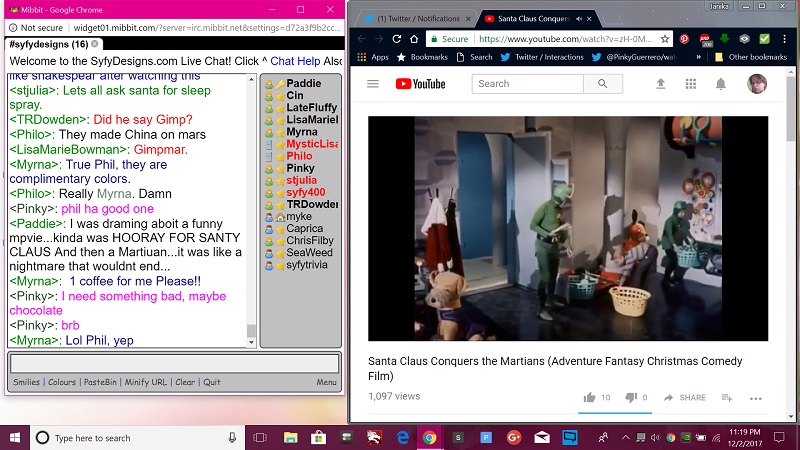 I mean, Martians turning on each other, it was a madhouse. 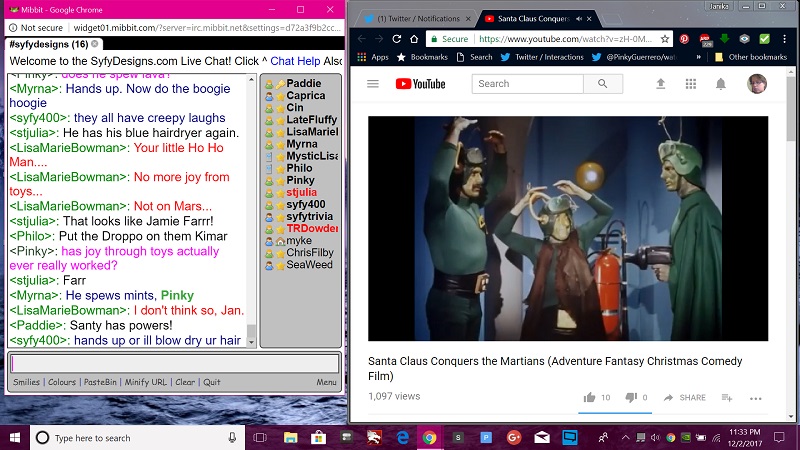 There is an actual Klinger Controversy about Jamie Farr really being in this film or not, in case that eats you up inside. 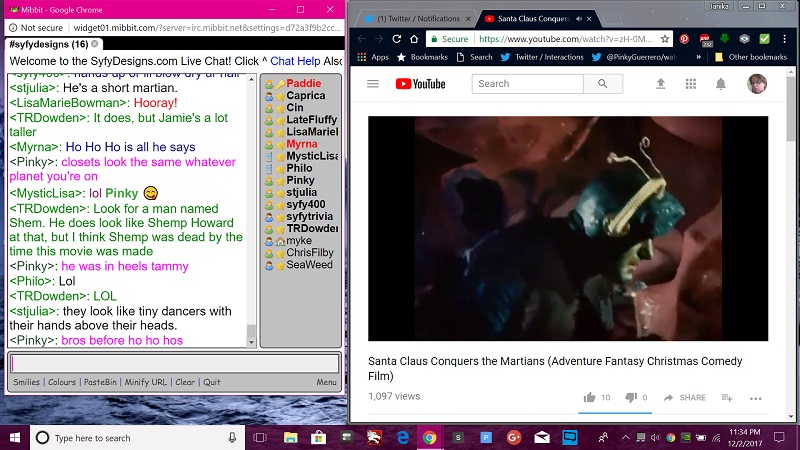 Santa is pretty devious, it turns out. 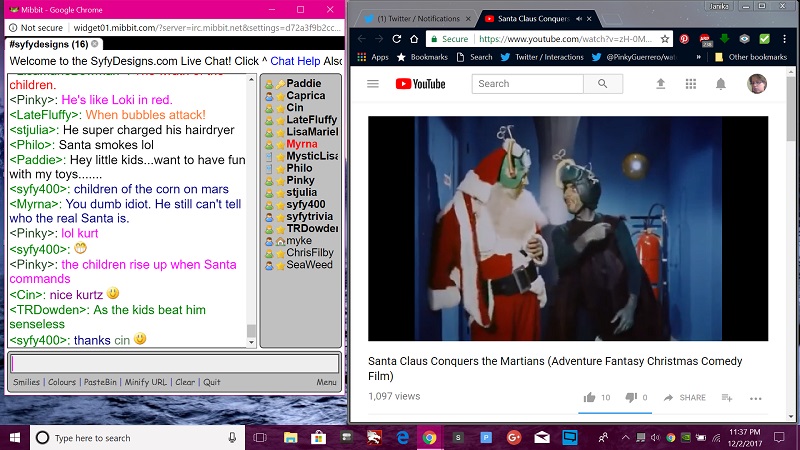 Aaaand that is forever burned into my brain now... 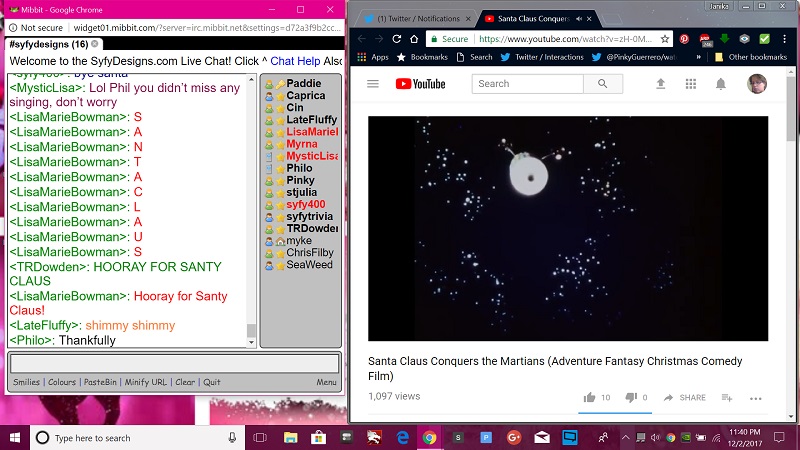 Ok, that got way long with 19 screenshots. *wow* Maybe all the junk I was going to meander on about should go into another post, lol.