I started this hours ago and keep forgetting about it.

Today was the good kind of brain melt. I've been in partial shut down all day, which is kinda like my brain being a roomba, kinda just bumping around, actually getting things done but very randomly and not always coherently. Since I'm kind of cleaning off part of my hard drive, here, have some random screenshots. I'll start with last night's #latenightmovie. 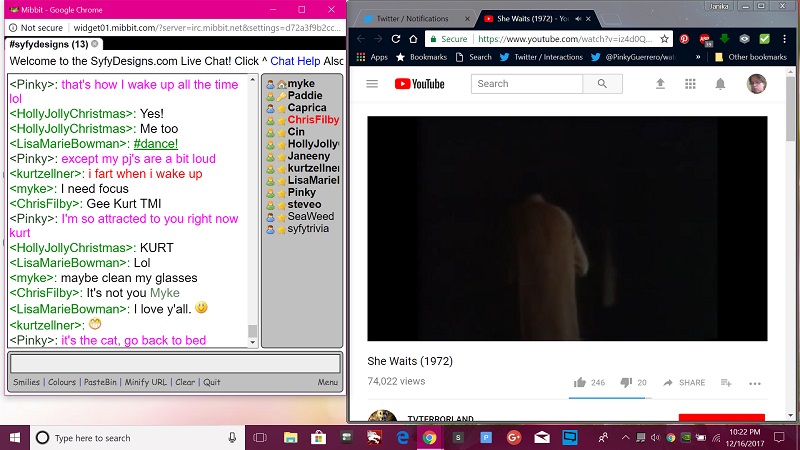 I don't know why I'm such a packrat. I'm like a compulsive digital hoarder. I steel my will every once in awhile and dump a lot of stuff. 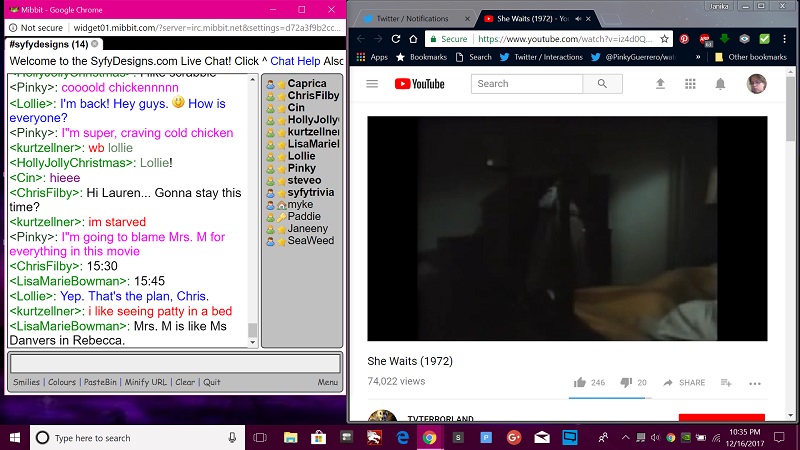 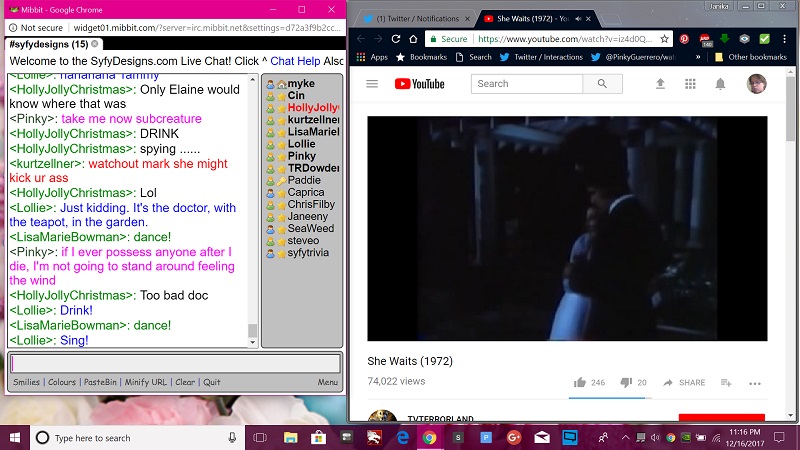 Whoever wrote that script is guilty of something in real life, I just know it. 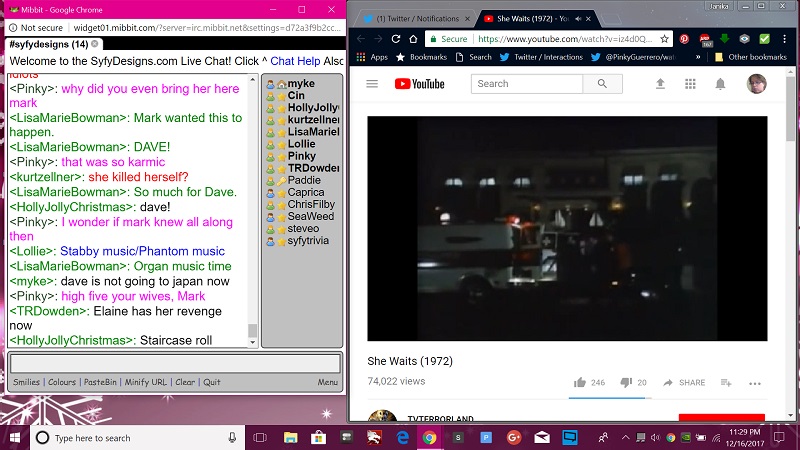 Creating worlds is like an addiction. Seeding new single player world names and resetting the defaults makes me feel like a minecraft junkie. One of these days I'm going to wind up custom building something so ridiculous that I'll disappear and you guys will never see me again. 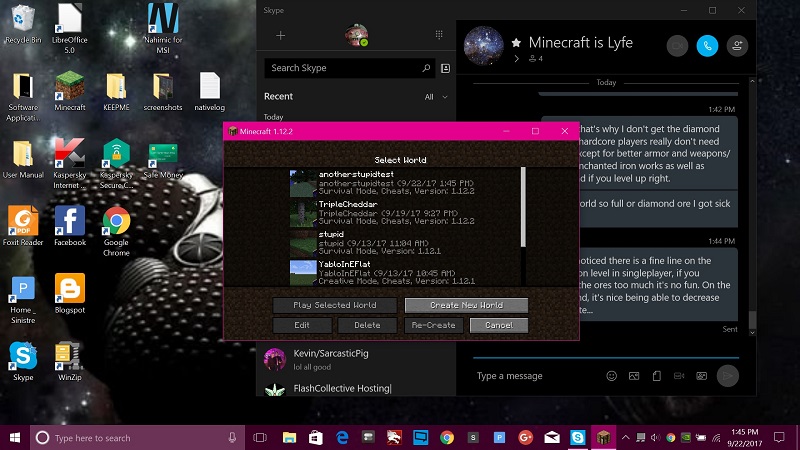 Yes, Gary Graham actually looked at a post in my Lexxperience group. This was awhile back. I don't know if anyone else really noticed, no one said anything. I think most people are pretty oblivious. 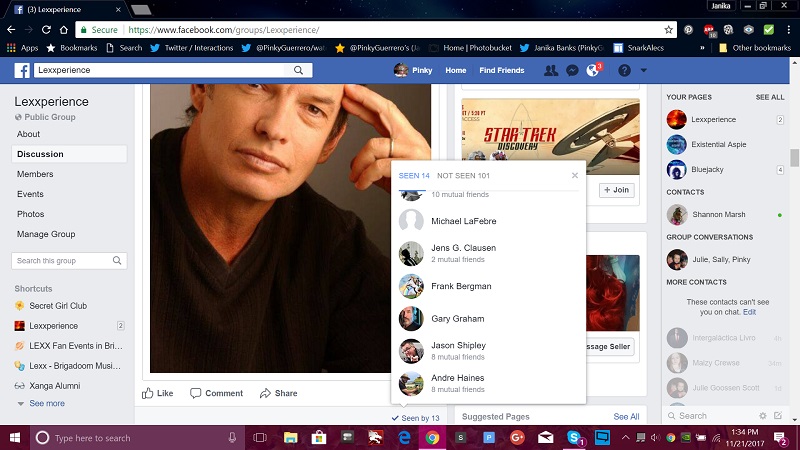 Oh, nothing *coughcough*. Just something off a stat tracker. Move along. 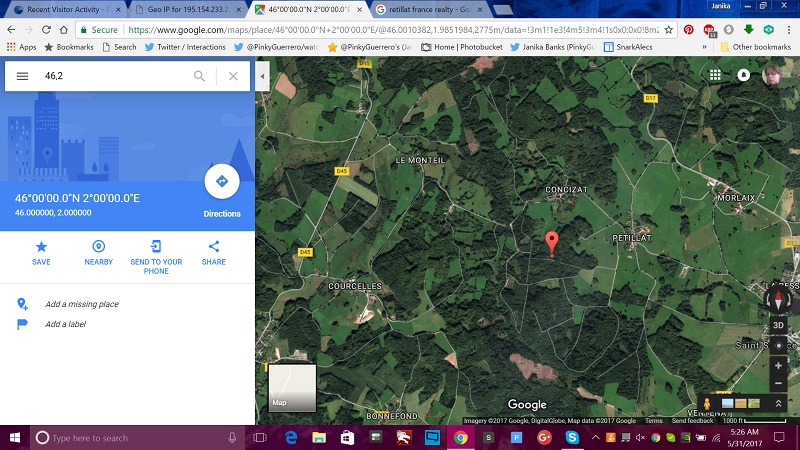 I feel so cool when I see this. 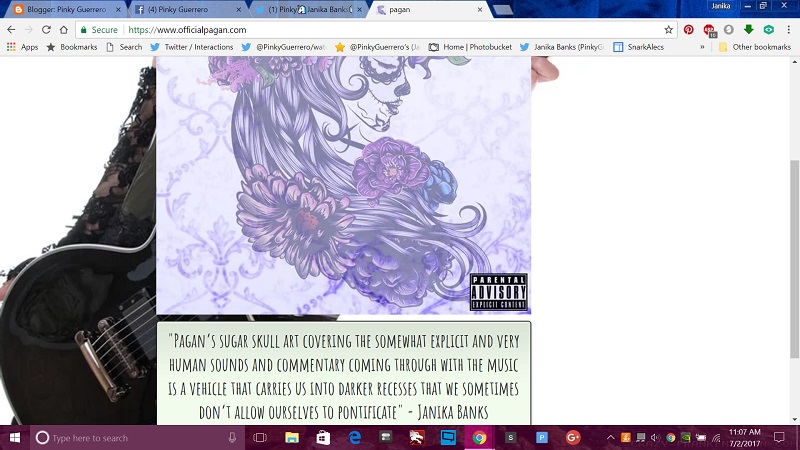 Seriously, cracks me up. What are the odds that this part of that post out of hundreds would wind up next to that stat number? 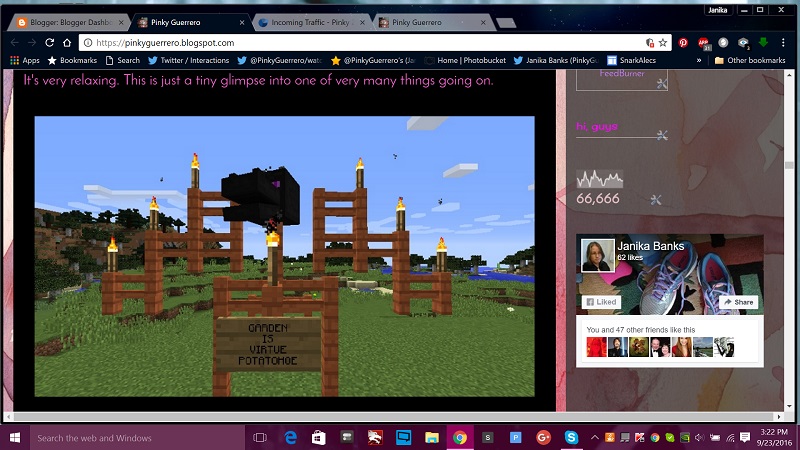 I keep saying I can see back yards. Satellite view and then google street view is pretty sweet. Please figure out how to use your proxies. Or not. I really don't care. I'm just a freakazoid who loves maps. Be aware, though, that it's pretty rare to get a real street address like this, and that once I do, I can look up the floor plans and value of your home, among other things. I mention once in awhile being able to 'see' people sitting in parking lots reading through post after post on one of my blogs. If I, a NON monetized blogger can see stuff like that just running a tracker, and timestamp your day out and even know where you work or go to school, which is really super rare nowadays, then YOU need to join the rest of us here in the future and realize how unprotected your tech and personal information are from fraud and possibly actual theft. 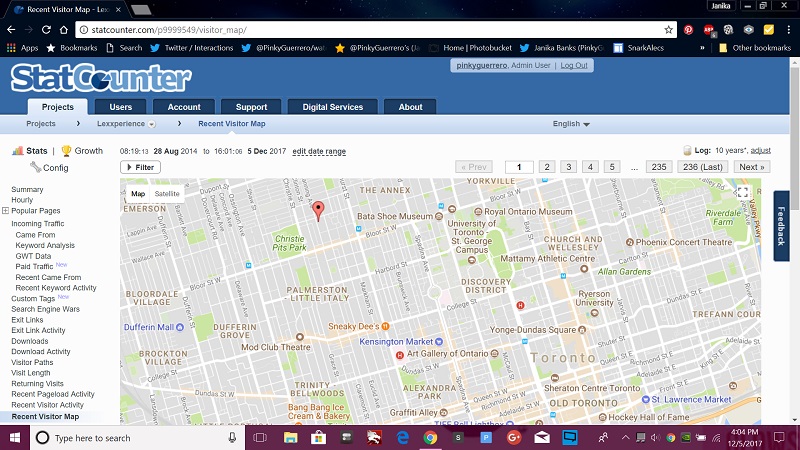 I think the biggest surprise I ran into this week was someone not knowing North Korea buzzed Japan again this month. That's a really good article, by the way. I think that timeline of developing nuclear potential is pretty spooky.

Wild gear change, if you aren't hip yet to the mandela effect, here's a quickie.


The only problem I have with this phenomenon is that they're blaming CERN. I've been bringing stuff like this up for YEARS.

Example- I had a fit one year about what I thought was a bible quote. Linus quoted a bible verse to Charlie Brown, and it's not even real. I could have sworn that was really there. This is from one of my Surveypalooza posts.
"I don’t know why I think I remember a bible verse about a prophet telling an evil king to go back to bed for another hour so his people can get some relief, but whatever it was impressed me when I was younger. I haven’t been able to find it, and when stuff like this happens it feels all Matrix-y, like something changed, and maybe I really do remember something because my brain didn’t completely readjust. Or like maybe time travel is real and people really do go back and change little things in history. I remember when I was a preteen crawling through the hay gathering eggs, was suddenly gripped with the weird thought that when I come back out, everything was changed, and I didn’t know who the president was. That was back in the 70′s, I had never seen any scifi like that, had never seen a Twilight Zone, etc. I have a cousin who experiences stuff like that, too, said one day in grade school he was terrified because the teacher handed him back a paper with a good grade on it, and he *knew* he didn’t do that work, and walking home after school through a vacant lot he freaked out about a tree being gone, and his sister said there was never a tree there. Either he and I drift through parallel lives, or things really do change, or we’re crazy, and my psychologist has assured me I’m not crazy. Anyway, it really bothers me that I can’t ever find that bible verse. If anyone else knows what I’m talking about, ~please~ put it in my comments. Otherwise I can only assume I’m on my way to early Alzheimer’s or something. :edit: 6-3-14 Someone reminded me that was Linus ‘quoting’ to Charlie Brown."
Ok, go try finding that quote now in any context. I can't even find Linus saying it. Good luck.

My personal point of view on experience distortion (I just coined that, don't know if it's a real thing, not seeing it used much) is that so many of us have actually been through it in some form without realizing it that a good half of our entertainment industry is actually (and quite comfortably) based on it. We so readily except the weird in our fiction that we expect it. If we lived in a universe where the weird couldn't ever happen at all, we wouldn't be able to conceive it in the first place to wonder about it. Our universe is wonderfully weird, and I love it.

One could argue it's our brains that are weird (and even faulty), and plenty of observation and research has gone into reality and perception and how our brains miss quite a lot going on around us (we aren't adapted to see infrared or hear higher and lower sounds than we do, for example), and time distortion is a real thing based on drug and med reactions and brain injuries, and of course there are memory jags and all kinds of stuff. I often feel like my brain runs too many diagnostics, because I get a bit of deja vu like it's on microsecond feedback loop, or like I even just felt a time break or jump or alteration, and I know from living in a brain like this that I can't count on my perceptions to be correct about reality around me. I have also seen false memories happen in other people during or after traumatic events, and it's really quite spooky to talk to them like that because they are otherwise perfectly sane and normal and you could never convince them something didn't happen that way when you actually have 2 other witnesses kind of thing. So I pretty much take everything with a few grains of salt, as it were. What gets really spooky is when a person has two memories of one event and can't tell which one is correct. I have a memory like that from my childhood.

So the whole mandela effect thing isn't CERN, and it's not new. This kind of stuff has been going on time out of mind, and thousands of years of humanity is so full of weird and creepy stories that it seems awfully lame to blame CERN.

What I HAVE noticed is that social media makes the whole reaction cascade go rabid very quickly. Before twitter and facebook, it just went in slower motion in email group shares and forums. Now that we can chatter real time with so many, it's like ignorance just explodes left and right, and logic gets drowned out very quickly in the madness and mayhem. How many times has some jerk posted that some celebrity died and they're not dead. But so many people share it so quickly that no one believes that person is actually still alive. We've become so death-obsessed that we can't seem to share quickly enough, to mourn hard enough, like it's all some big ocean current we get pulled into. Whether a person really died or not, that current pulls so many people under, and now I'm literally hearing from all sides that 2017 has been the worst year EVER. Even mental health professionals are saying this.

NOPE. I am several decades old, and we've definitely had worse years. We're all aging, we're all heading for death's door, and the rest of our lives will be spent watching out for who dies next. Really??? Guys, I was in high school when Elvis died. There are so many stories about how he's not dead, etc. And John Denver? Conspiracy theories galore, but the truth actually really was pilot error. So many brains get so swept up in the fervor of emotional tide that we collectively develop false memories. That's a real thing. WE ARE OUR OWN MANDELA EFFECT. Besides, Berenstain/Berenstein- I see so many typos everywhere I go, like on billboards, in newspapers, and it's common to see copyright ripoffs with slightly changed logos or names. That notwithstanding, I love that video up there and I'm going to check it out some more. I wish I lived in a place like that, where reality changes from room to room.

It's all fluid. All of our realities are always in motion. There is no 'truth' that we can prove beyond the shadow of a doubt, and there never has been. I hate to agree with Jim Carrey, but we really do make up what we think is truth in a universe we can barely even see. Aside from Plato's Allegory of the Cave (that just threaded every post I ever made here with the word Plato in it), I'm not sure we're smart enough to be discussing how smart we are.

I've otherwise been in a really quiet mood lately.