Last night's #latenightmovie with @LNMGang in the SyfyDesigns chatroom was The Fantastic Four (1994), and I think we learned more about Kurt in one night than we have since 2014. I had never seen this version before, so I was really surprised at how hit and miss the storyline felt compared to nowadays, but the rest was delightfully awful, so no hard feelings.

1994 must have been the year they realized they could use blue effect, and this one went to town for about 5 minutes on making everything blue. 1994 was also the year I first appeared on the internet, and I do actually have the web history to prove it, lol. 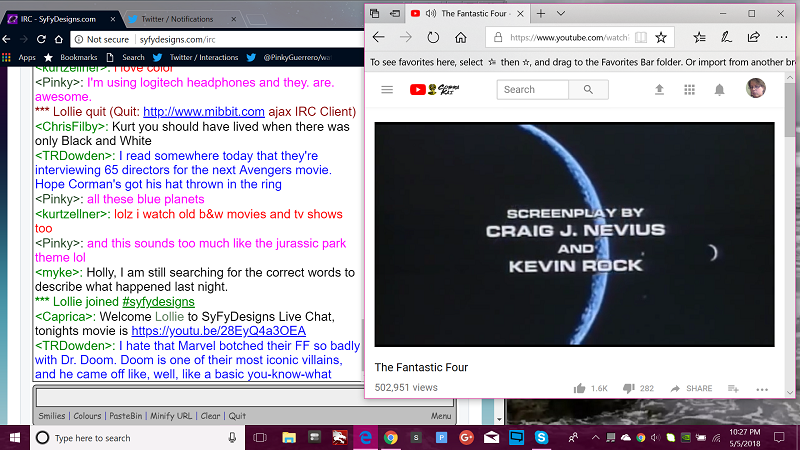 I totally resisted going into Mystery Men mode when Lollie asked that. 😁 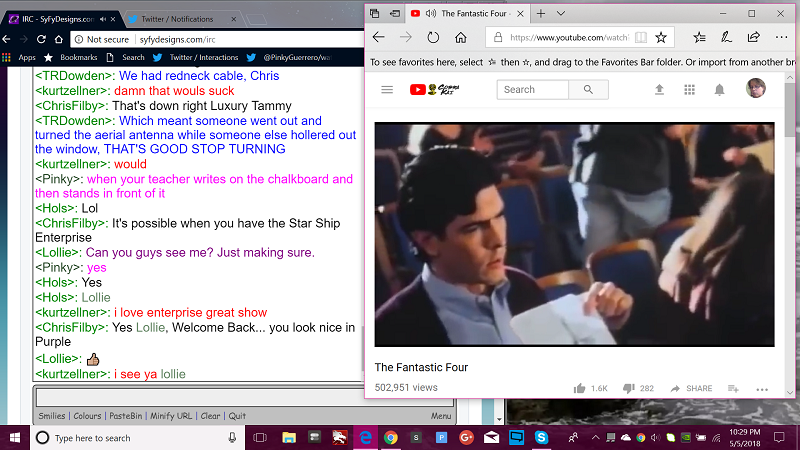 Lisa, too, has been swiping red back from Kurt for weeks. Myke is noting our need for a red spectrum. 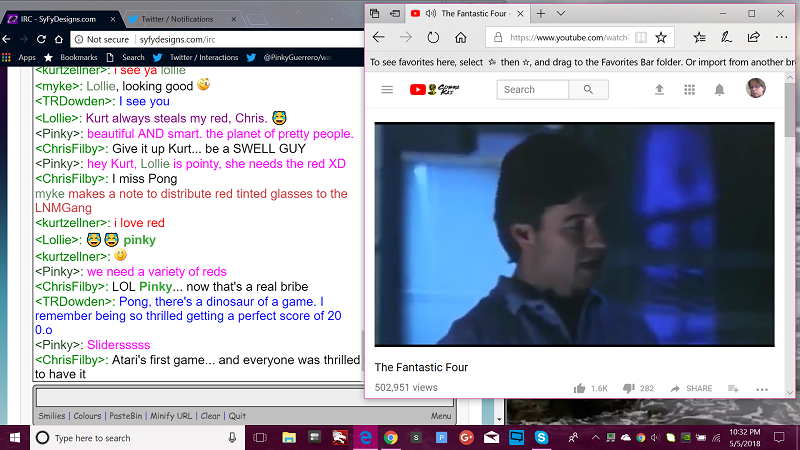 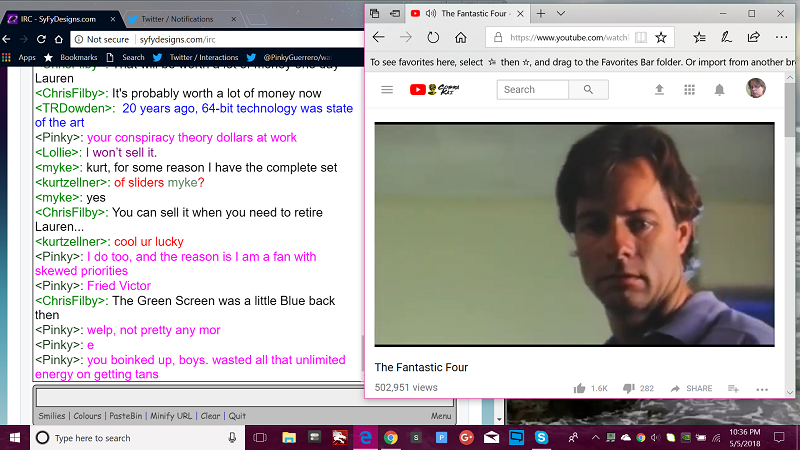 In case I really did lose everyone, I intro'd a Six Million Dollar Man joke after Victor got fried and a baddie said they could remake him, Chris said he had a lottery ticket, and I guess his winnings won't be invested in Victor. We were moving at higher speed than usual. Several people were craving sweets and I didn't snack on my usual cheese, so the moon musta been crazy or something. 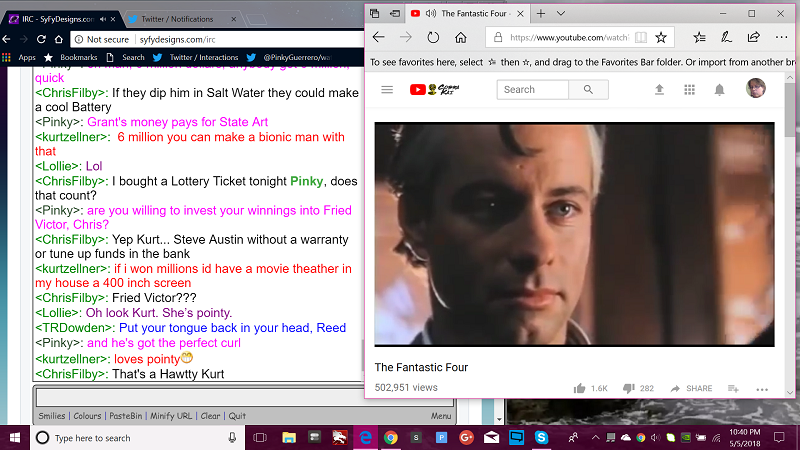 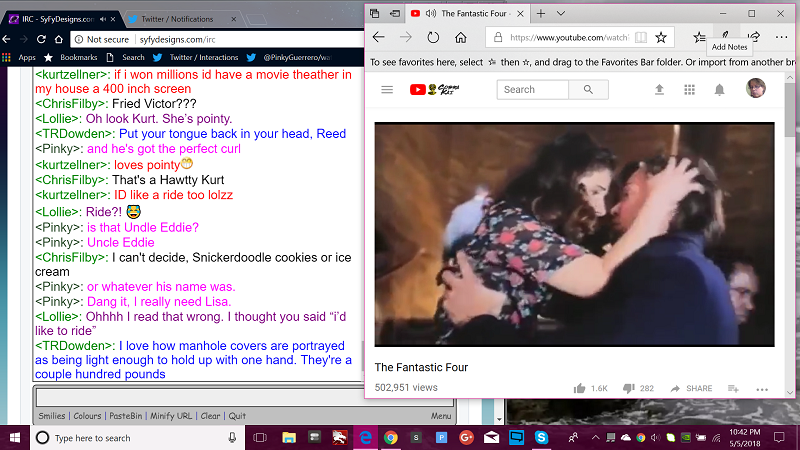 I have never yet found out exactly how the 'thinny' came into existence, but it's when people get kicked from the chatroom for any reason at all, usually a tech problem. Incidentally, TRDowden wrote Aftermath. 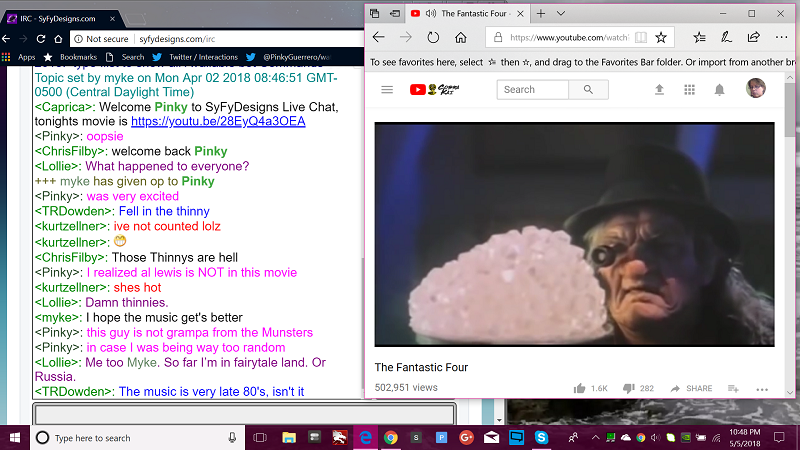 In case you get that song stuck in your head, here it is. 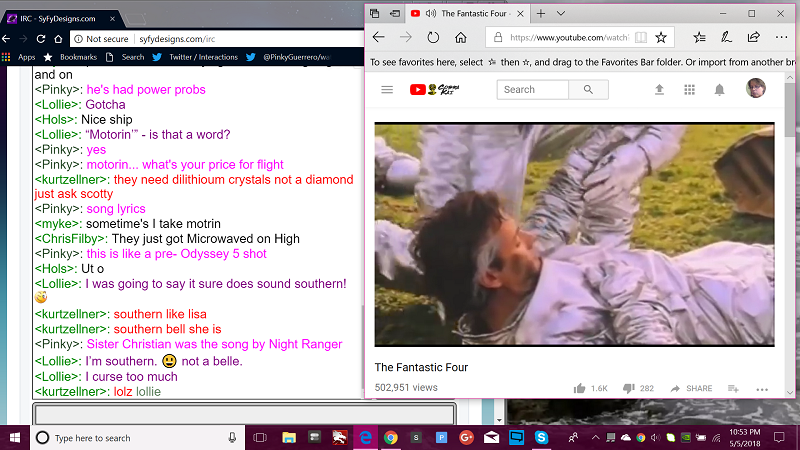 And then Vader showed up... o_o Victor's dilemma practically turned this movie into a Vader crossover, and from there all I heard was Dark Helmet lines in my head. 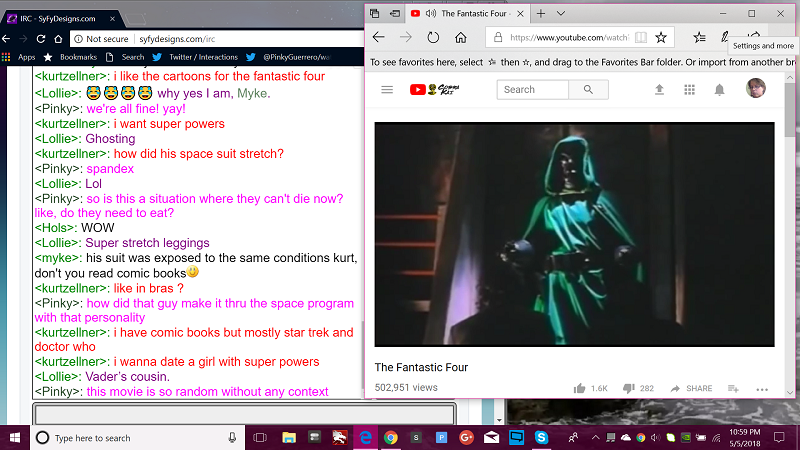 Kinda makes me wanna see a tense moment in a movie where the lead accidentally locks a phone... 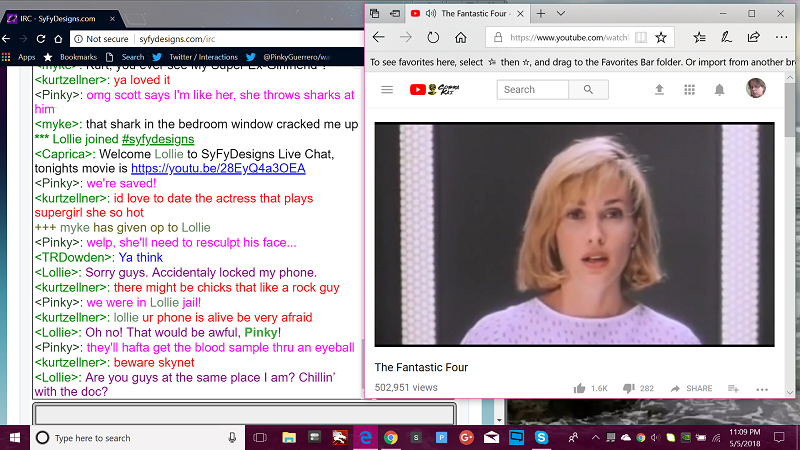 I srsly need to make sure I have ice cream on hand next week. 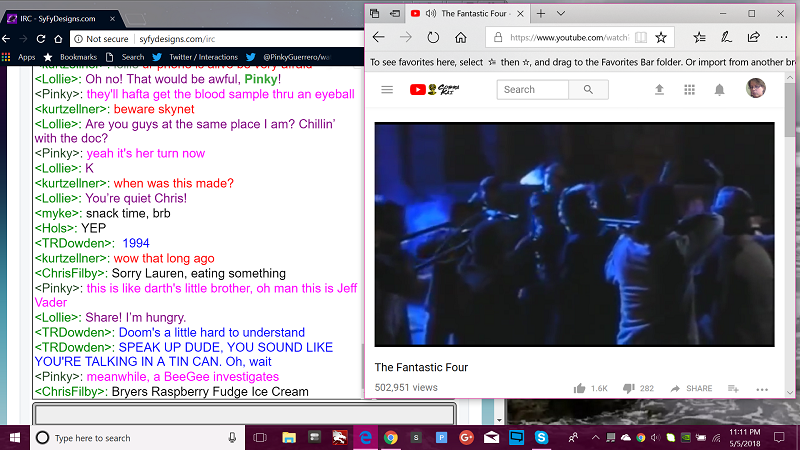 Kurt is in a jillion twitter lists. I actually looked. He probably has no idea how much power he wields. 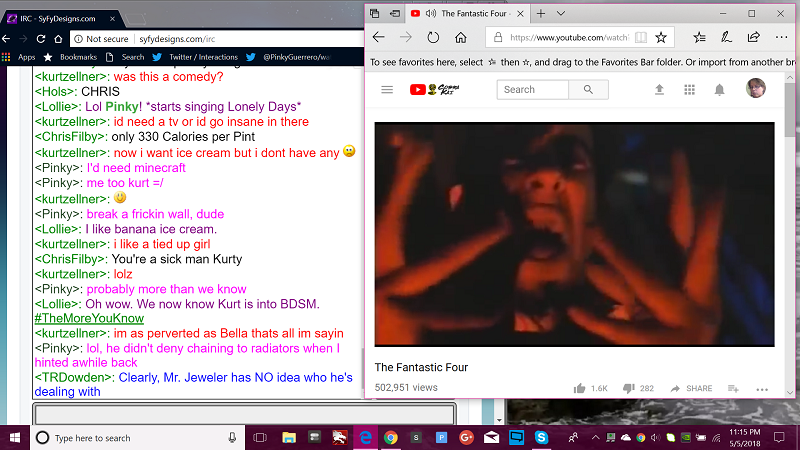 Even when Lisa can't be with us, she is with us. 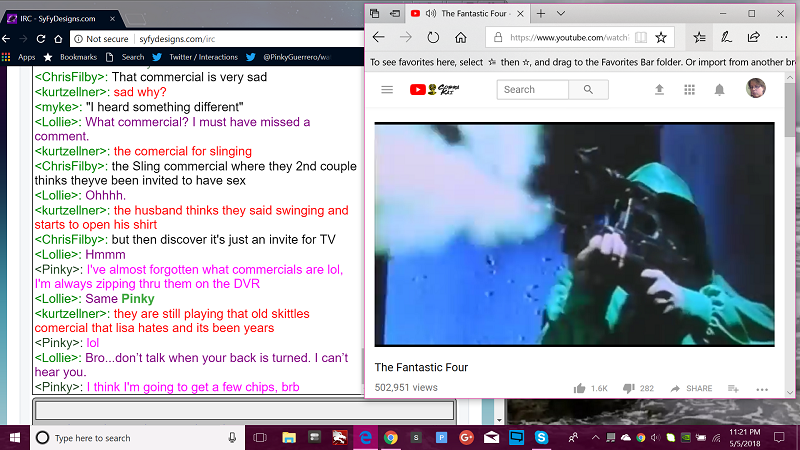 The last line in this next screenshot would be a great writing prompt. 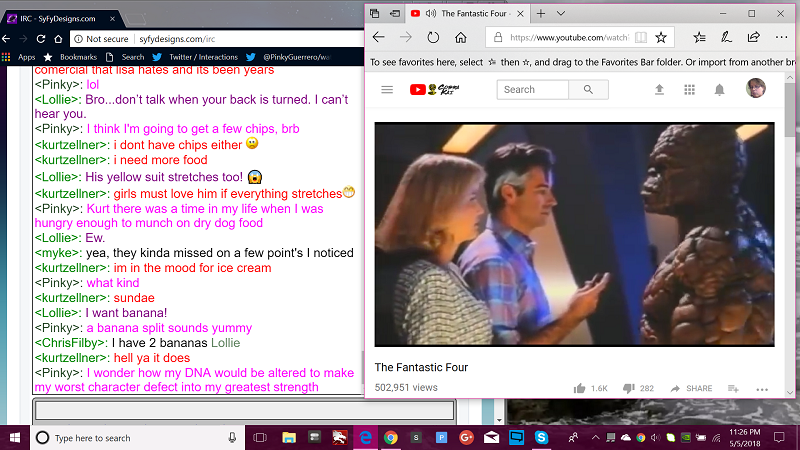 You guys know I'd list my own character flaws in a heartbeat just for sport. 😂 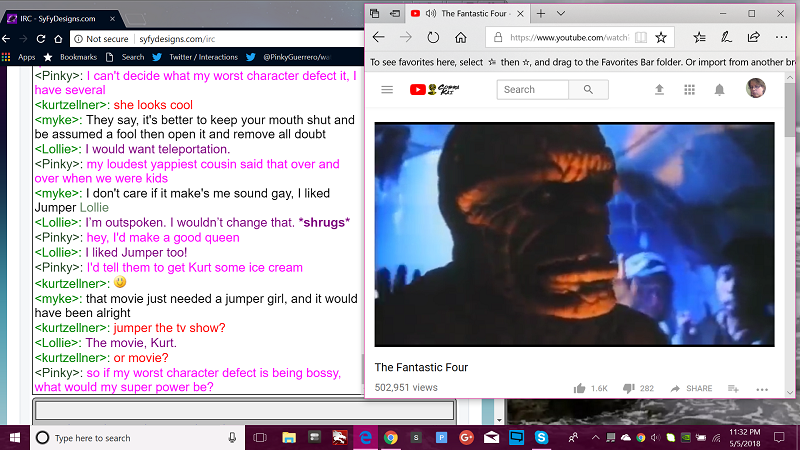 I probably wouldn't pass the ring test like Galadriel did. 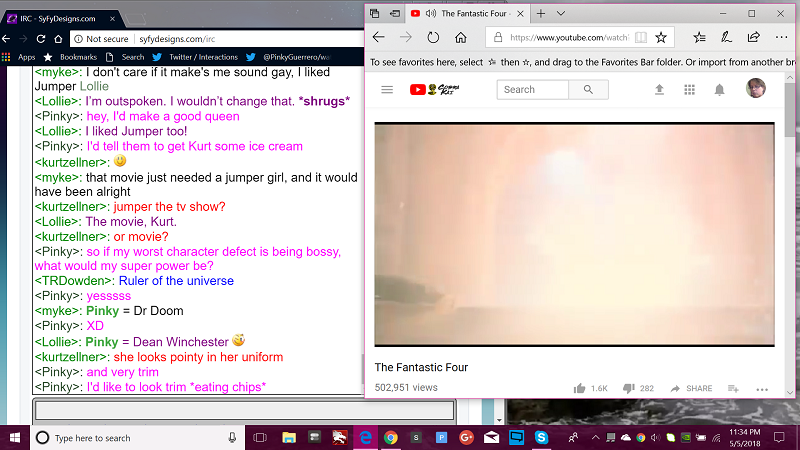 Hey, I've seen the pink slime take over the the souls of the weak when White Water goes down for a week in August. 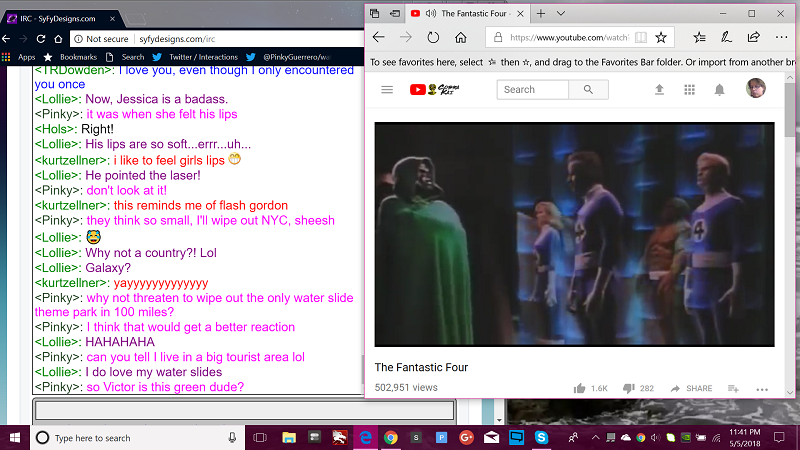 See, I know there's such a thing as bad teleport because lava in minecraft. 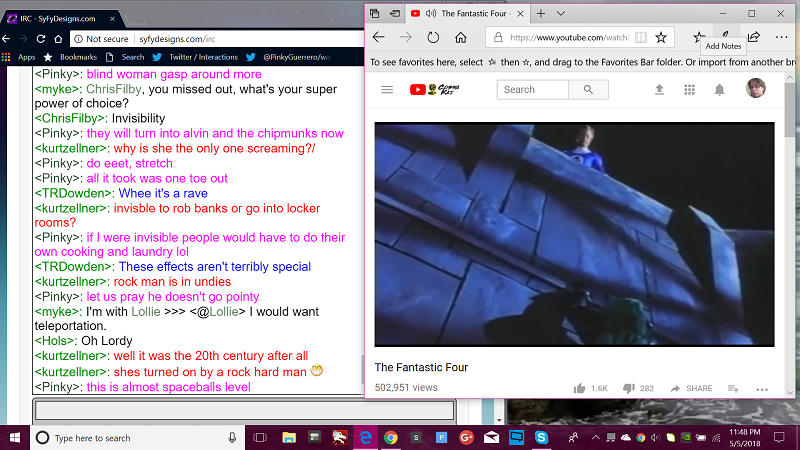 I was guessing, it could've been a comedy for all I know. And as with all the older movies, the ending was fairly abrupt. 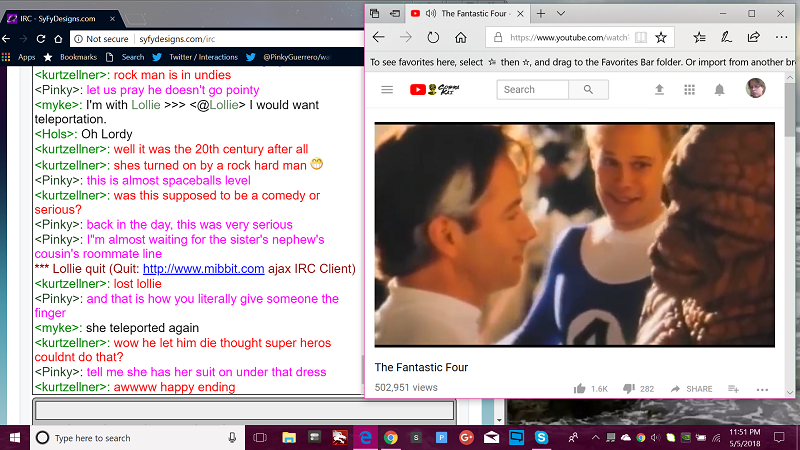