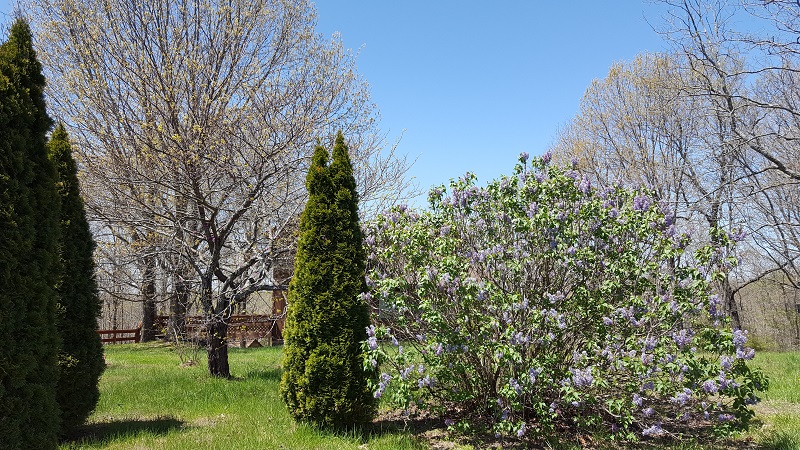 That lilac bush up there is 20+ years old, about 10 feet tall now. I remember when it was a twig. This next is our redbud tree. We've never seen it flower along the bigger branches like that before, usually sticks to the smaller branches. Maybe growing new baby branches? 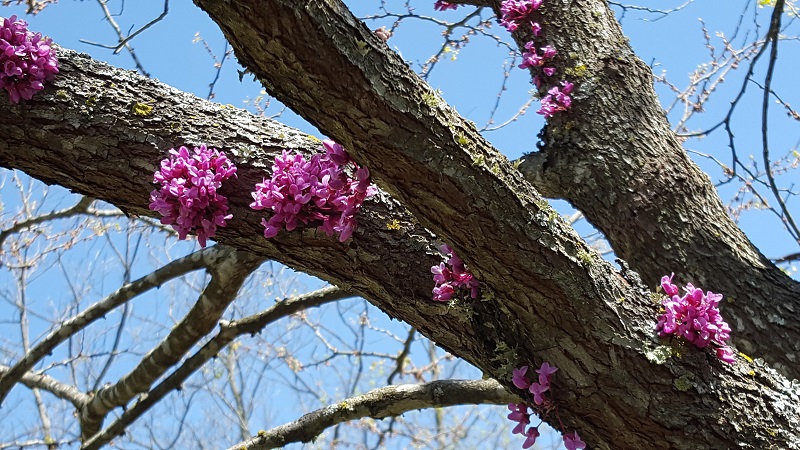 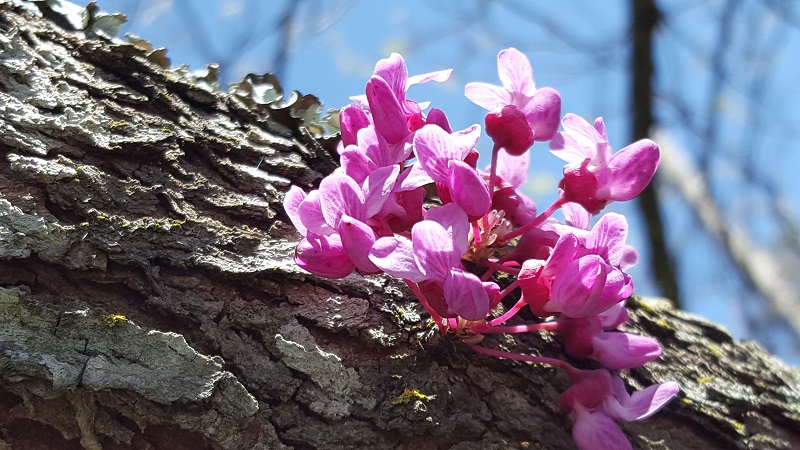 The clover patches are coming in really thick. We used to have lots of wild bunnies but I haven't seen any in years, not sure why. Bunnies love clover. 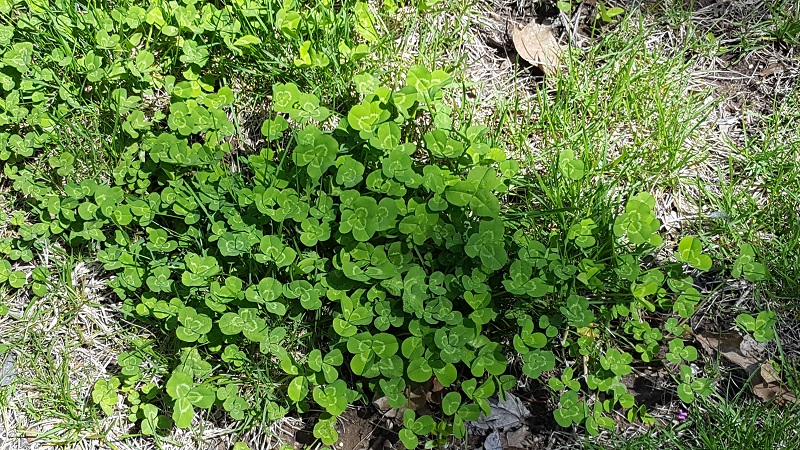 Baby butterfly bushes sprouting in. My yard will smell like someone tipped a giant vat of honey over when they bloom. 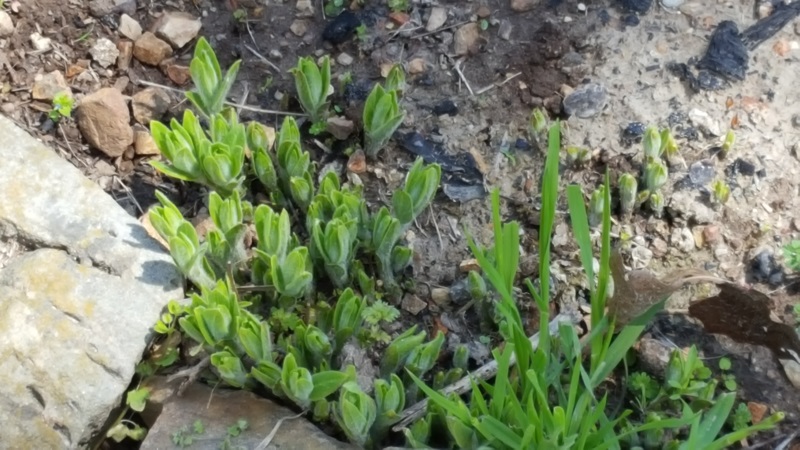 Papa got lots of help this last weekend. 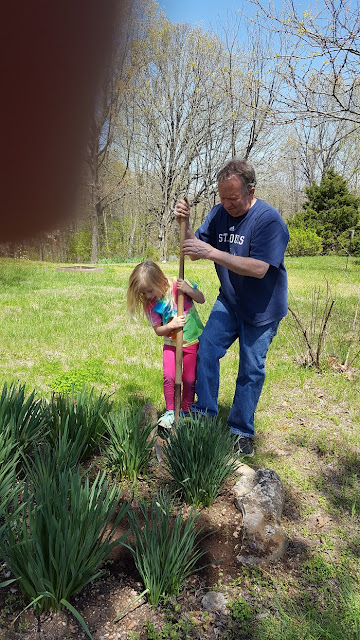 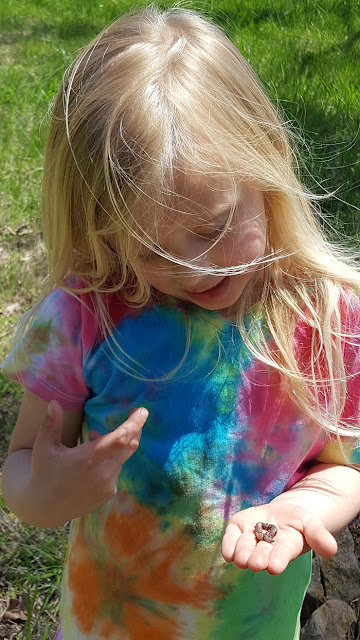 I got lots of help, too. We've got mixed flowers, cantaloupe, zucchini, and radishes started. Some sight words also magically appeared out of nowhere and surprised all of us. She had never spontaneously made them herself on paper outside of a classroom as far as I know. 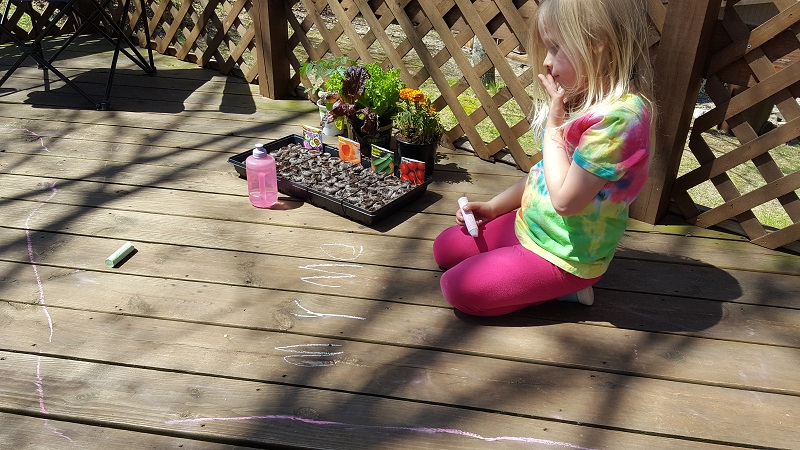 A friend gave me this conch a long time ago, and it has always looked beautiful under a little tree. I don't know what happened here, maybe the winter was extra rough and little critters started gnawing for minerals or something. Now we can see how pretty the inside looks! Hard to see, didn't use any filters, but the pink is glossy and magical. 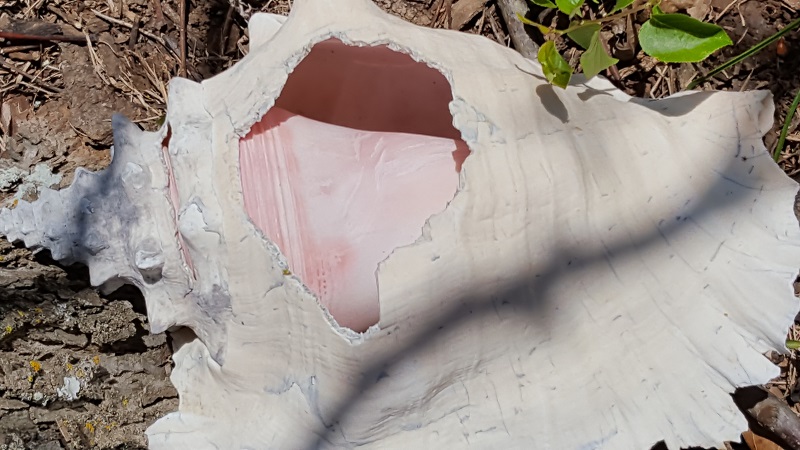 This happened across the street the other day. No idea what they were doing, but something got fixed rather pronto, and then they were gone again. Water line? No idea. 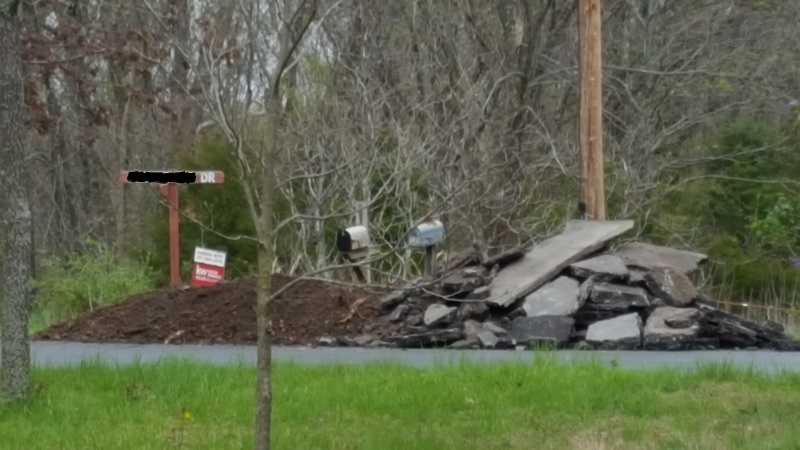 Someone got face painted at a school carnival. 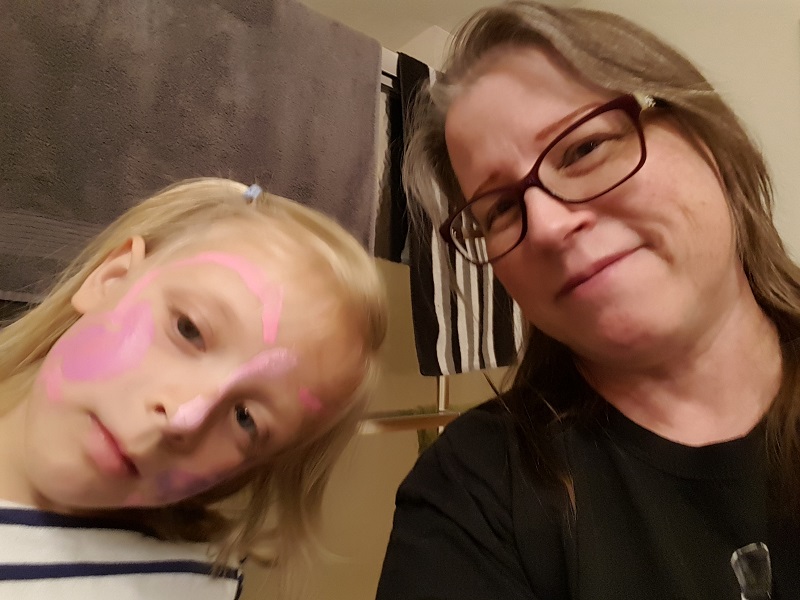 Getting pretty good at first shot on target with that flame bow. Got me a gamer girl. 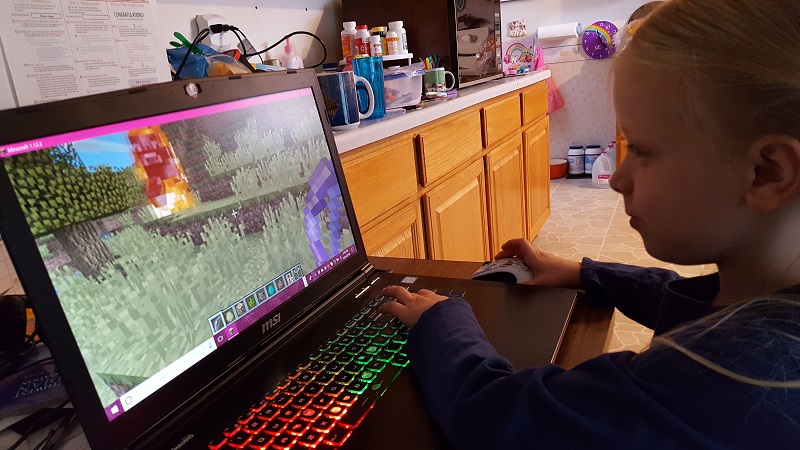 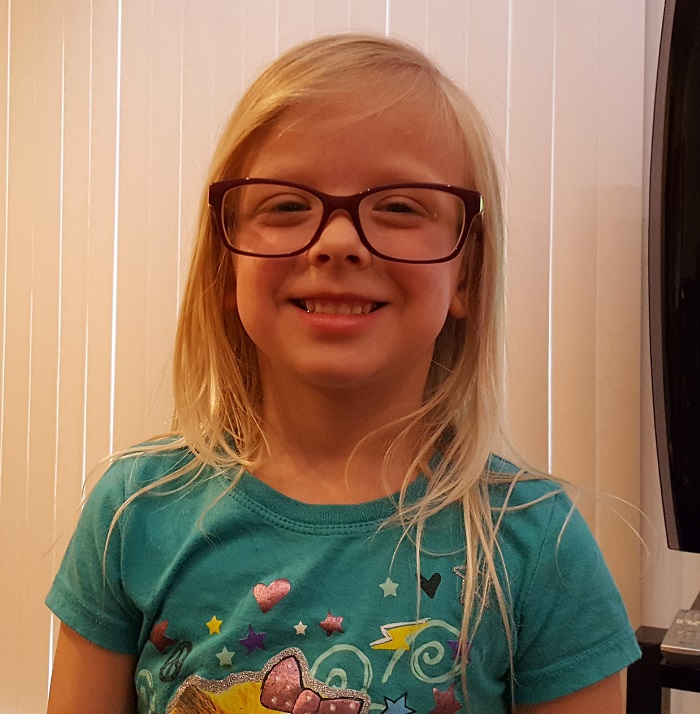 Caught one of those flash sales and grabbed this. It's here if you want one. 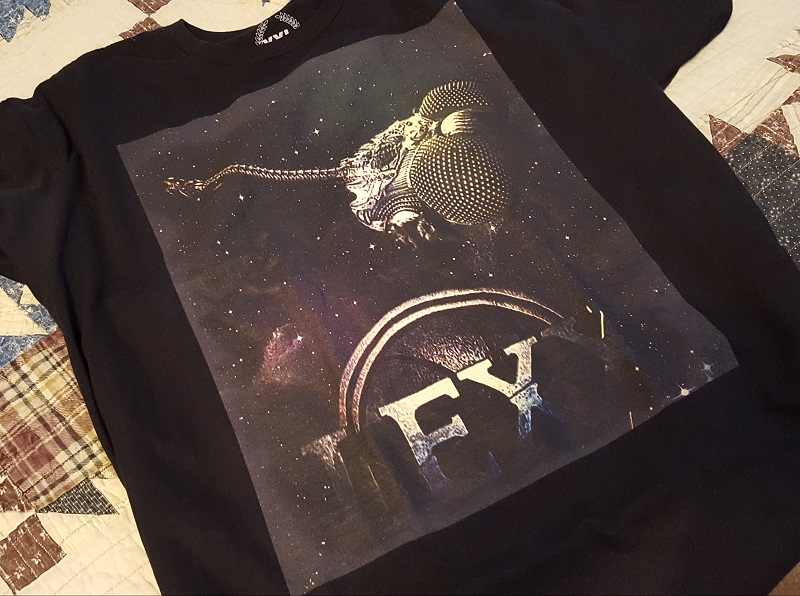 Not a clue what I was saying here, but it's from a few days back. 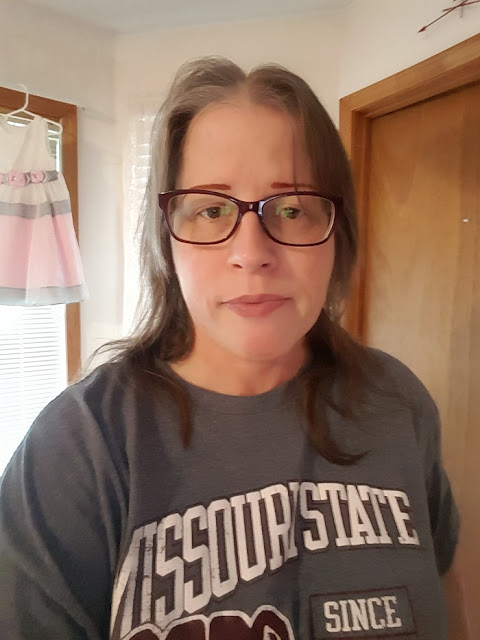 I know, I used to post pix all the time and I almost never do anymore. My Batman turns 5 pretty soon, so maybe we'll see what he's up to soon.

Hang on a sec, I'm being hacked by something and I've gotta reboot to get some stupid popups outa my way. K, I'm back. Kaspersky was throwing fits. I need to take that off since it's no longer properly supported in the U.S. It loves to hate java, but I can't help wondering if it itself is part of the back door in on that, and maybe that's why a ton of big companies and govt offices dropped Kaspersky like a hot potato. From 9-13-17 Federal Agencies Ordered to Stop Using Kaspersky Software

I've been doing a lot of thinking last few months about money *wow* my blogger editor keeps moving... I never see it do this. Not the first time something weird has happened while I blog, live blogging is my fave sport. And the save button seems to be going off every few seconds. I'm trying to figure out if I'm doing this or what. It's like when I want to shift but not really. Or like when a finger slips onto two buttons but not really. And every time I mention it again, it stops. So I guess I'll keep typing. I have remote turned off, hopefully that didn't default after an update or something. testtest Welp, moving on.

aaaand this just happened right when I was typing that. 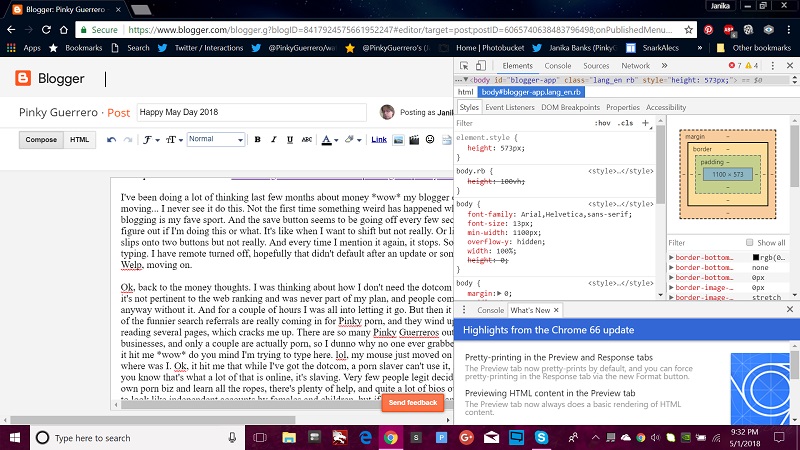 Ok, that was last night and I just went to bed after that. Now it's morning.

My point is, as long as I own my dotcom, no one else can own it for something yucky. As long as I own it, it redirects minds away from addiction enslavement and toward actual thought. So I might keep that one.

Then I got to thinking about the old Lexx forum that I've been paying for. It's unusable, and I haven't been able to contact anyone about it for years. I basically have the info to keep paying for it and that's it. I don't have the power to migrate it or fix it. If I stop paying for it, will it disappear? Will the owner stir and ask for donations? Is the owner even still alive? I could conceivably copy/paste content to a new area that is much cheaper if all we're doing is keeping the content from disappearing. If I do that it'll be a LOT of work. It would go to another forum I pay for that would be open to public, and I'd basically have only 5 scant months or less to get that done before annual fee comes back up. That changed on me, by the way. I had paid ahead 5 years and they up and changed the annual fee the next year, making it much more expensive, so I'm shelling out over $300 a year now for a dead forum that I can't fix. I've put years of pocket money into that fandom museum. I don't know what else to do. But the second it would disappear, someone would ask me why...

That last paragraph wore me out just writing it.

Anyway, stuff like that. Stuff I pay for that could go toward other stuff instead. My budget is super tight and most of my money goes toward my own health care. I nailed down about $45 spending money per month, and I'm so terribly frugal that I manage to do big stuff with it. Still, all this stuff isn't technically necessary to overall future plan I originally made, and this might be the year I pare it back down to why I'm here in the first place. All that distraction into other things was because of other people pushing me this way and that, and I learned a lot and actually had fun and grew in many ways that were good for me, but I've got to pull the scattered mess back together now. I figured out my own stuff along the way, and it feels like it's time and I think I'm about ready. Maybe I should let go of the extra stuff.