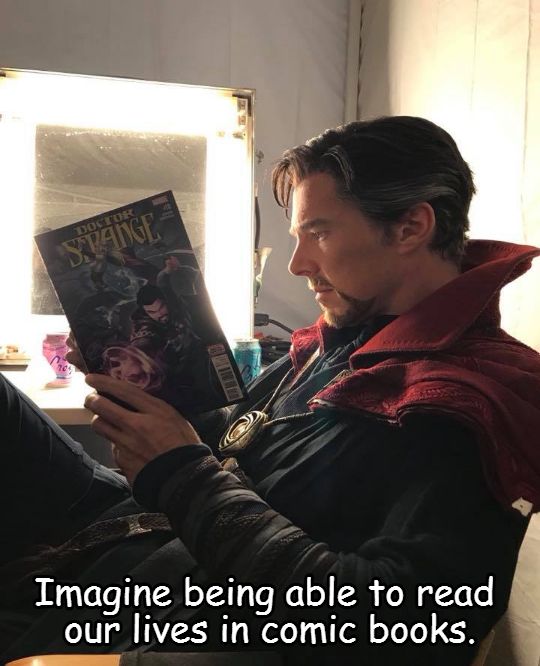 Stuff.
I think I'm going to write my book like that. I'll have to send the entire thing straight through without an editor review or it'll take forever arguing back and forth about rendering out my coolness with their auto software rewrite.

Thoughts lately.
I drew a blank there. I'm keeping up with the new episodes, just spaced out while a thousand thoughts suddenly crowded in.

I used to try to meticulously untangle all my thoughts. I thought if I laid them all out I'd be able to objectively and more logically see where meaning lies. I'm kind of leaning nowadays in the direction of subjective interpretive leaps.

For instance, I am very slow audio processing. I can listen and retain very well as long as there is no other stimuli. At all. But add visual and background noise and interruptions and whatever, forget it.

On the other hand, I'm a speed reader. I can glance through very thick technical material and sift out pertinent data very quickly and then transcribe condensated (action word for condensed, yes, I know it's not a real word but it should be) interpretation for easy ingestion by others.

So it's dawning on me that, maybe, trying to be so conscious of every thought is getting in my way. It's slowing me way down. Like math, for you non-mathy types. It feels very laborious to think through structuring a complex math sentence, but so easily spoken as an idea, right. Some brains are good at expression, some are more intuitive without it.

Back to Ancient Aliens. Reality starts with the Nazca lines. They exist. We can speculate till the cows turn blue and never really have an answer. The pyramids, on the other hand, are making more and more sense all the time. It's like our planet broke out in a pyramid rash one millennia and they've never gone away, like chicken pox scars.

I finally ventured into the 'truther' vids about the vacuum of space. They have a point. When I was in grade school back in the 70s, it was common knowledge that space would explode your eyeballs if you didn't have a helmet on. You really don't see that in scifi any more. I asked @bonenado about the Tesla car that SpaceX sent up, why didn't the tires blow out, and without an eyeblink he shot back maybe they were solid tires, because there is such a thing. My husband, with basically no knowledge whatsover of the science of a vacuum, was smarter than Elon Musk in that moment. Even if the Tesla car was for real, why did Elon stutter when he was asked that? Why didn't he shoot out a real answer? And even if the Tesla car was fake, why was he not ready with an answer like that? If he's so smart, how could he not just say something like that when put on the spot? @bonenado was the kid who ate glue in school, and he shot that out so fast without even thinking, and he hadn't even seen the videos about that.

I don't think anything we see is real. Since I was a kid, I have suspected that there is way more than we can imagine, and way less than we speculate. I've been saying for years that we are swimming in radio waves and radiation, that our satellite transmissions are a soup all around us, every possible thing we could ever pick up a signal on is going through us all the time. Worlds we don't see and can't imagine pass through us continually. We bump into walls that we could easily walk through if we knew how, we drag around in bodies that we either hate or take for granted instead of using them to enjoy life and learn how to love each other, we stumble over our own thoughts into gloom and fear when another thought could easily dissolve that away.

What is reality? What are we choosing?

I'm hiding in my house from a brainwashing cult and practically living in a game server, and you know what? I've never felt more free. If you try to tell me that's messed up, I'll say yeah, so is the idea that we wish aliens would come tell us how to love each other.