Got the calendars out yesterday and started the Bunny spacetime mapping. Executive decision from both meemaw and papa was a resonating *no* when a Bunny weekend came up. Not complaining, I adore that kid, but meemaw was left far behind in the vaca / date night / weekendcouplewithoutakidintow thing years ago during the last 3 boyfriends (before there was even a kid), and if I were to total the Bunny hours we've put in the last 24 days (including driving time) and, what the heck, toss in an ER trip looking for a possible hernia, and what the heck heck, I've been going to bed every night at 6 p.m. for nearly a week now- I think we're due a break. I understand parents have kids around all the time (except when they're at work and I was a stay at home mom***, plus I raised a full time step kid and oh what the heck, towed around extra cousins for a couple of years so people around town thought I had 4 kids) (did I mention I was already having autoimmune flares back then?), but we're talking @bonenado and I actually taking kids on anniversary and Valentines dates with us, because we had no one else and at least we were getting out of the house.

***To be absolutely fair, I actually left my kid around Bunny's age behind for 3-4 months while I worked in another state, and all around that time before and after, my mom helped a LOT with her while I did 18 hours of college and 60 hours of work every week one semester. I pretty much saw sploit asleep and that was it, so please understand I'm really not complaining. In fact, that was the year I nearly drowned myself in alcohol until I nearly crashed my liver and still managed to keep my grades up and be awesome at work. I really do get all the things. But I really do need rest right now.

So we're preplanning possible routine Bunny weekends, barring scheduling jilts from whatever bug is going around and holidays jamming up custody tussles over another kiddo caught in the fray. Also, @bonenado got a lot of wood split and hauled for his very aging parents, which wouldn't have happened if we'd said yes. Weighing options here- freezing old people or hyper kid while parents get a weekend off...

And really, @bonenado shouldn't even be doing that level of work at his age (my opinion), many men out there have never worked as hard as he has in their lives, especially not being paid, and especially spending nearly his entire vacation taking care of other people instead of taking off in a high $$ RV home like the neighbors seem to do several times a year, so this is just meemaw reflecting on how we need to keep papa in good shape to keep seeing a Bunny growing up.

Anyhoo, I've got little exes on the calendar for the possibility of being available every other weekend so I can stay on top of whatever heads up comes our way. And then I allowed myself a day off yesterday (in between sorting and homing material in 4 more sacks of scattered swoop save Bunny bomb stuff and folding laundry) and just played minecraft all day (if all day means walking away from Jawn every few minutes and then remembering I had a game going and coming back to it), and it was awesome.

New Sherlock tonight!!!! Have you guys seen this link from Sherlockology? Click the pic for Google Street view of the flat they film in. 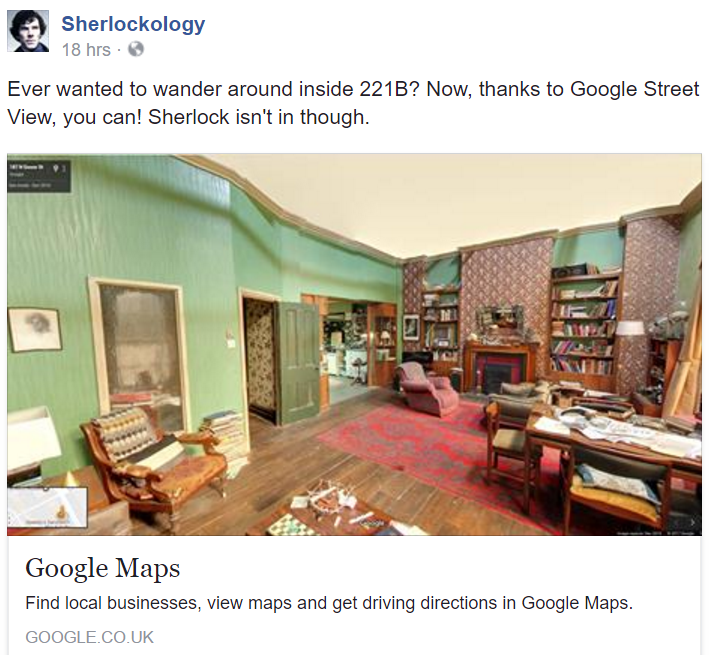