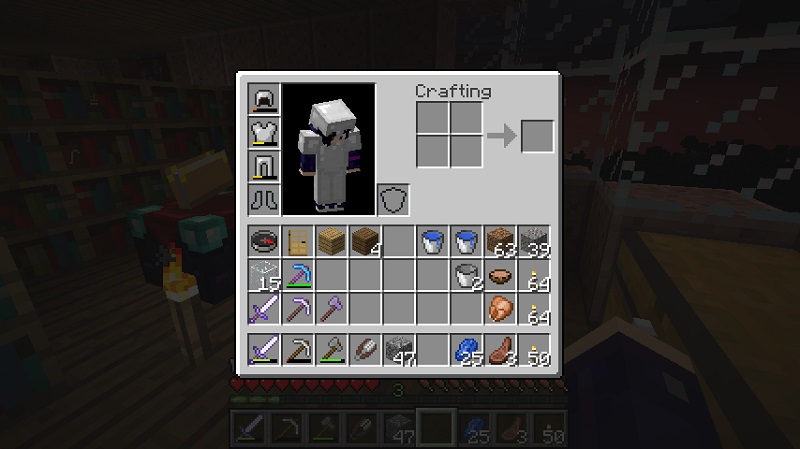 Ok, sexual orientations of all ages, (remember when we used to just say 'boys and girls'?) (Is that politically incorrect now?) (Because personally, I am alt-aged in my head, I am both young at heart and old of soul, and even though I don't take offense at someone asking my age, I don't see how that has anything to do with anything unless you need to know if I'm a meemaw on medicare.), where were we...

This is a 3-part update thingy because things. Minecraft (pure survival), the sleep study fallout and consequences, and my git'r'dun list for the rest of the month. (If you are only interested in the CPAP fallout, I copied that part to my spaz blog.)

uffda- Singleplayer, no cheats except being able to see my F3 coordinates. Everything is from scratch. I've had the launcher open in play mode (not paused) for 52+ total hours over the last two weeks, first mentioned in Pinky vs @bonenado. During those 52 hours I have died 10 times, slept in a bed 111 times, harvested 2K+ coal blocks and made 3,573 torches, established my dominance at world spawn and several perimeter outposts covering almost 1000 square blocks, and have lately finished building a sweet very big 3- story house on the edge of an extreme plateau. I killed 18 horses to make books until I found a village and swiped all theirs, set up a library, then went about learning how to make obsidian from scratch (which involved very dangerous climbs to lava sources with buckets), and last night made my first enchantment table from scratch. I have yet to run into a single cow, so I don't have milk for cake, but I did make my first pumpkin pie yesterday, also.

Minecraft survival requires extreme braining skills. Over the last year I have gained orientation and planning strategy skills that I've noticeably been able to apply to real life.

Also, minecraft has been phenomenal for getting through anxiety. If you've never reeled off a cliff into PTSD induced anxiety surges and an hour of weeping just writing a blog post or book chapter, try it sometime. Get on that old roller coaster of confession and start screaming, it's a real trip. You guys don't see how many times I walk away in mid sentence while I'm writing because it's so real and immediate just addressing memories and feelings and reconstructing those into readable format that it's all I can do sometimes to come back. Minecraft is a really awesome relief diversion for me, plus it keeps me creative and on my toes.

My apnea-hypopnea index was 17 (I was told that meant I woke up an average of 17 times an hour), and my desat was 78%, which is importantly not good and scary bad. Blood oxygen saturation ideally shouldn't fall below 80%, and if it does, it's considered critical. (Simplistically, I'm on my way to congestive heart failure if I don't correct this, if something else doesn't get me first.) During sleep study, according to the document I link in the next paragraph, 75-80% is considered moderate, and less than 75% is considered severe, so I'm kinda cutting that one close. (Ever wonder how people just die in their sleep? Now you know.) 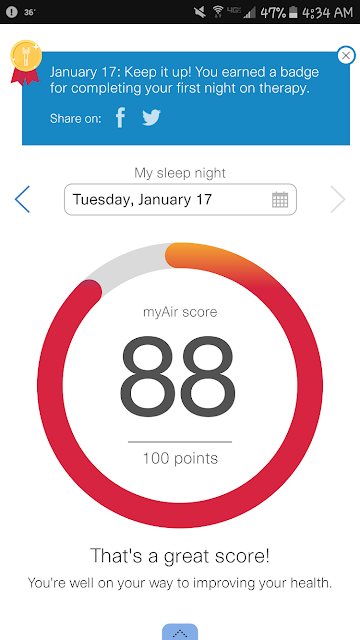 How to Interpret Your Sleep Study That's a pdf document, so give it time to load, actually very cool with pictures and graphs of how it all goes down on the testing end.

I have 4 out of 6 qualifying CPAP symptoms- daytime sleepiness, hypertension, insomnia, and mood disorder. I've lived with all this for 2 decades. I've never yet had a stroke and never dx'd with heart disease, although both are prevalent in my mom's side of the family, and once that stuff hit my mom, she went down fairly quickly. I have been doing everything right- nutrition, exercising, med monitoring, excellent bloodwork and health according to everything I'm tested for. That means nothing if I'm not getting enough oxygen. 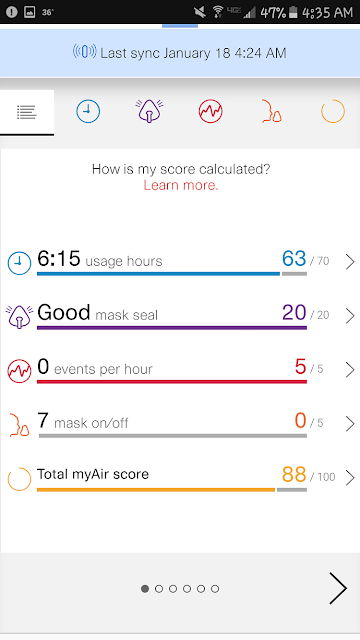 Last night I found myself ripping my mask off at first, but that stopped and I slept great after I lowered the humidity. This morning I'm sneezing and runny nose stuff like allergies, but apparently this is common and someone in comments said lowering the humidity even more helped, so I'm going to try that. I'm already on round the clock zyrtec with benadryl on standby, but we haven't started cedar pollen here in Mirkwood yet, so I need to figure this out before successive allergy seasons blow back up on me. Unless I actually have a real allergic reaction (and you know I'll be watching this), I think the O sat level coming back up is important enough to keep trying. At any rate, saline mist helped to dissipate that discomfort this morning.

Side note- I'm finding out that sleep apnea can happen in all ages and body types, and you don't have to be old and fat to 'get' it. I had a sleep study done 10 years ago that I wish they'd followed up on more rigorously, because even though they didn't see apnea, they did see brain rhythm lending to insomnia, which I was probably born with. I'm sure nearly ripping my head off ejecting from a vehicle crash didn't help anything, but for years I've lived with so much neck pain and weird sensations, including pain with swallowing, I can only wonder if part of my need for CPAP now is from an ongoing degeneration around the nerve injuries I acquired in that wreck. It's interesting that I barely weigh 5 pounds more than I did at the time of the first sleep study ten years ago, pretty sure 5 pounds wouldn't cause apnea on its own, especially since I'm currently 40 pounds down from highest weight. If you are holding back from looking at the possibility of a sleep apnea diagnosis because of stigma, you might literally be holding your life in your hands, so check into it if you're having symptoms.


Since I'm on my make a Plan stuff, may as well toss in that I'm past two weeks cutting the caffeine in half and about over that nasty withdrawal headache, so now I'm working on the slow xanax taper I wanted to start last fall but wisely decided to wait until after holidays. Absolutely no idea if that enhanced my big meltdown, but I'll be conservative and say probably. GABA receptor stuff is no joke. Me and low dose benzos go waaaay back. This ain't my first rodeo getting off the stuff, and I know that patience is my biggest virtue on this little journey.

I'll be honest, the weird left side intractable nerve pain I live with spiked quite a bit overnight from the extra stress of learning to sleep with CPAP, and it's not pleasant sitting here feeling little pain spikes down my left ribcage and shoulder (fibro related costochondritis) (my heart is so conveniently in between, so I'm also dealing with the anxiety that pain lends a hand to), my sinus feels stuffy and uncomfortable, and I'm sitting here thinking 'and it's not even bitterly cold and snowy/icy and there's no big allergy season YET', so I need to divert myself back into chores around the house and MINECRAFT. It's all about survival. I'm using virtual survival to survive both depression and very real medical challenges, so it's back to the lava I go.

I can do this.