Week 14 in #SnarkFF and even with tweaking I'm projected as the underdog at only 30%. I've got more trophies than my opponent, though, ha! 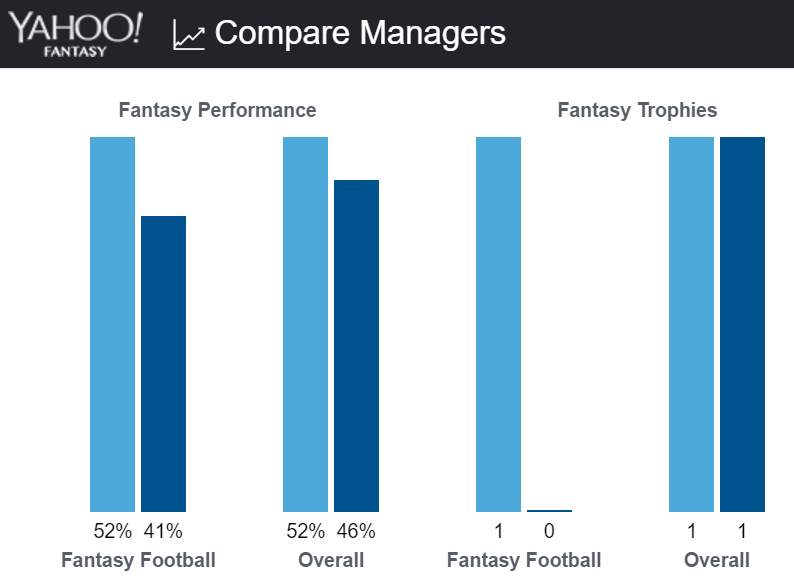 Still holding 8th place overall in the league. I actually rank 5th in the league for earned medals, so at least I'm one of the more spectacular losers. 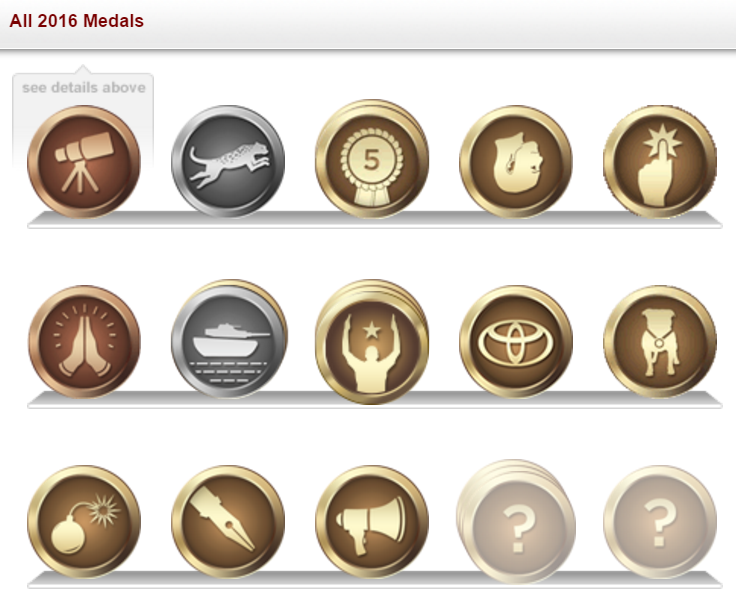 Sadly, the only thing my team has made it into the league record book for is the smallest margin of defeat, but at least it holds for the entire season and not just one week. My consistency as a loser pretty much means I make sure my opponents are forced to run just a wee bit faster than me. People do hafta work to beat me.

@bonenado, on the other hand, is still 1st in the league *rolls eyes*, but he's second in medals earned *lol*.

Yes, married to obsession. I've discussed his recycling habits with my pscychologist. I once experimentally dumped wet coffee grounds over something I threw away, followed by pouring old cooking oil over it, and found out later the thing I buried had still been rescued after the trash was carried out of the house. That's when I knew it's probably better to capitulate (because I'm actually not a mean person when it all boils down, although I could have kept running experiments). I now ask before I toss. I'm surprised we have trash to haul out at all, after all the places @bonenado goes to dropping off a variety of materials that can be reclaimed.

It's funny that we don't fight over this. He's almost secretive with this compulsive obsession, just quietly dogs away at it, so I'm coming to realize it's his stress reliever. If you feel like you have no real control over your life (his work place is listed for sale for 3 years now, he has a kid/grandkid bringing all kinds of chaos into our lives, and dreams of retirement started fading long ago), you can still rigidly control the trash leaving your house. If you can't save the Titanic from sinking, at least you can clean it up a bit while it's going down. If this were more self-tortuous I'd be very concerned, but since it's his way of feeling like he left some good in this world (like my blogging, I imagine), then it seems to be a healthy way of dealing.

Well, we did have a cranky session about a boat yesterday. He's always wanted a little one to go fishing, he keeps putting it aside for other things, years have gone by, it came up in a passive aggressive self defense maneuver, I said GO. BUY. A. BOAT. (we really do all want him to just go get one), and he just came stumbling out from a nightmare about being in a little boat on the Mississippi River and it getting caught in something and being dragged and stuff was going all wrong and he couldn't free the boat and he thought he was going to die- THAT is a stress dream. And since it came hot on the heels of our convo yesterday, yeah, STRESS DREAM.

We've got to take my car in this morning for oil change and transmission fluid, so I've already got the bacon done, and now that he's up, I've gotta get eggs done and jump into some clothes.

This is my fave stress combo. This is for @bonenado today.