I dreamed the other night that someone gently kissed me and told me to keep going. I won't say who, but it was extremely significant because it's not someone I'd ever have thought of on purpose, but definitely someone significant. I think I was being told to turn back to my original direction, the one direction that has always held true for me.

I have wanted to quit so. many. times.

I love words. I love the internet. I love all the neat little quirks and creative ways of people I find.

I also love solitude and quiet. I love being very deep in my head, lost in worlds I can't explain or describe.

I'm pure bachelor. I can live on eggs and nachos for weeks and never miss television while I work on stuff.

And I am a driving force that can't be still and let the world ferment without blasting holes wherever I go.

I think I know now why I'm always sad at Christmas. I moved away from my best friend during 9th grade over Christmas holiday, and I've already shared the rest. I guess stuff just sticks in the back of a person's mind forever, until decades later it resurfaces. Explains quite a bit, though. I didn't get to say goodbye to her on the last day of school. A gang of girls was chasing me (I went to a school where getting beat up was real, kids would wind up in hospitals) because a foster sister was telling everyone my family kicked her out (the state wouldn't let us take her with us, and we didn't know that until the money part of getting a new house was done), and the ONLY reason I wasn't beaten to a bloody pulp the last day of school before Christmas was because I dove onto the bus. I thought I was going to miss it because I was running around buildings dodging people, so by the time I got a seat, I was so frustrated at missing meeting my best friend in the whole world for a last goodbye. I never told anyone. That was about the saddest moment I ever had in my childhood.

Kind of loling at the medias, watching people saying f* it on cue. They don't remember doing it the same time every year. Holidays wear us out, the slump afterward leaves us disillusioned and upset, and it's like watching some kind of weird mating season, all the twitters and facebooks start spouting off like a nationwide chorus of frogs in a pond.

We're not alone, guys. I've been saying it sucks for years. YEARS. I think I just notice and remember more.

K, so anyway, I've worked really hard for 4 1/2 years on platform, stats, content, presence, all that pre-launch stuff, and between going in multiple directions (which was FUN, I truly do love trying new things) and being a little too available (a real challenge for aspienado), I've lost my direction and now I'm spinning circles not really going anywhere, just holding a position. I need to break out of a cycle I keep reverting back to.

I rethought several things. Pinky Press Review really does need to go. It's neither part of the original plan, nor is it necessary to curate other content with my name on it. It does very little to enhance anything I've already set up, and I'm paying out of pocket for it, so I really do need to let it go. I'm glad I learned what I did from it.

Statcounter is definitely going bye-bye. Favstar, Jib-Jab, maybe even my post office box. I only got that for my Klout goodies, and I don't go after those any more. I prepaid the old LittleLexx forum up 5 years, but if nothing changes on it in the meantime and I can't get into it to fix it myself, I'm just going to let that go in 5 years, too.

The dotcoms stay. Pinky blog is getting really overloaded, but it all still works pretty good. I think the internal blogger counter is broken, because total views on some posts don't match actual views in the post list, stuff like that. I don't even care any more. Blogger isn't terribly transparent with how their tracking works, so I have no clue what they think they're actually counting.

I'm taking December off. I'll still blog and tweet, but I want to divert away from overdrive. I'll still be public and people will still be able to contact me, but I've gotta take a break from checking #ALLTHETHINGS. I'm more than a little obsessive with it, and because of that I'm too aware of a few problems. I need to be less aware for awhile.

I'll still tweet links for SyfyDesigns if I'm doing stuff there, but I'm not sure I'll be available for movies with the gang all month. We've got a tonsillectomy coming up before Christmas, and I'm pretty much clearing holiday chores out of the way asap so I can focus on Bunny recovery and family support.

Part of my 30-day challenge is a salvage project. It's boring, but I'm tired of losing stuff. I like to archive what I love because way too many things disappear off the internet. In the old days (ten years ago, haha), that was a bigger deal, but so much has changed now, and there's so much new stuff flooding in all the time, most of us don't even realize when stuff disappears. We just don't have time to notice. Unless we're compulsive speed reading OCD maniac web hoarders. Bless those people, who others usually fail to thank or even notice exist. You only know I exist because I make a big deal of it. PINKY ROBOT WAS HERE. hahaha

OH, yes, focus on today. Let's see. I took the library book back before I finished it.

This gif is awesome, I drop my book just like that. Continually. Click to see it animated. 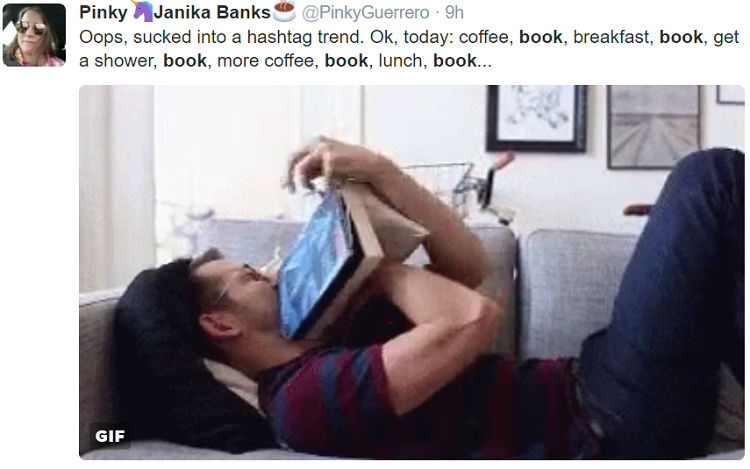 My day out wasn't exactly enjoyed, but I still enjoyed it, does that make sense? I went to the JCP home store and pretty much got a really nice area rug for free in between sales, percents off total, extra $10 off for something, another $25 off for spending beyond a certain amount- basically, two bathrooms get new rugs and my kitchen gets a big free one. That's about all I could handle, though. I'm still worn out from an impromptu Bunny day yesterday, kind of having a bit of a headache, my house is trashed and very sticky, and I'm working through one of those stupid feeling shrugged off depression lies that hit without warning. My personal life is wretched sometimes, but I'm too egocentric to notice most of the time and just keep plowing through in my little Pinky way, leaving other people bobbing in my wake. You know why I love the entertainment industry? Because it fills so many holes left in me from growing up. All the arts, guys. All the creative ways we express ourselves. What would we be without that? In the long dark night of the soul, who would we be if we couldn't make marks on rocks with some kind of paint?

Anyway, this is Pinky not quitting. I'm still touching base, still public, but if I'm going to gather my storm, I need to clear out a little space. 30 days. Can I do it?