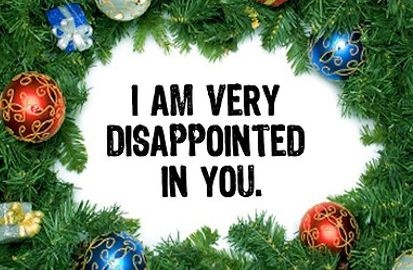 I usually write about Festivus, but you can click that and see the old stuff if you want. Some people rerun archives this time of year, but I'm still blogging live and asking if you've got your poles set up for tomorrow's Feats of Strength. By the way, if you are ironically winding tinsel rope around your pole, I'm just as ironically torn between #thumbsup and you're doing it wrong.

Naturally, I dreamed about my dad debating (he likes to call it 'arguing' and relishes it like a sport) with me last night until I finally got sick enough of it to just walk into my bedroom and get into to bed, and the second I fell asleep there, I woke up here and discovered I had slept in 2 hours past my usual time, ~*~awesome~*~, so I extra long dreamed about religious and political debate (my childhood feats of strength, as it were) and then abruptly woke up when I thought I was finally escaping it. I don't feel refreshed...

I don't have anything else, except yesterday's pain reverb from therapy turned into a super focused woodland mansion search mission since the latest minecraft update. Srsly, my luck, mine generated next to a lava bed, and I have that on video, so here's this huge roofed forest fire blazing up just a few blocks from the mansion... But that story goes on the minecraft blog. Eventually.

Holding my breath with the Sherlock fandom, first ep to air since last Christmas will be on New Year's Day, and if you're not a Sherlock fan, the one crucial thing you need to know about the most worldwide rabid fandom I've ever been a part of is that there have only been 3 seasons (with 3 eps each for grand total of 9 eps) airing every other year and then one special- in 6 years. Is there any other TV show on earth that could have not only survived like that, but gone viral around the world? And by that I mean even in Japan and China. I'm pretty sure Moffat cleared a little path for Benedict to world trot intro'ing Doctor Strange in one of the biggest world sync releases in history. I think fans in the United States who still aren't aware we saw it premier last need to get a grip on how important world sync is and what that really means for us. I won't go into the political power structure building around the movement of big money in fandoms, but we are definitely going there.