"What really brings you here today?" 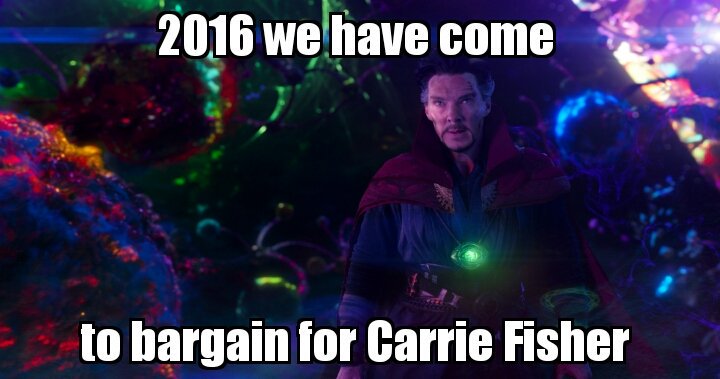 That was in one of tens upon tens of thousands of #CarrieFisher tweets that I've been lurking through ever since it happened.

I can't help the question popping up- but if she does survive this, what then? Will anyone walking the edge get real help if she does? One tweet mentioned just chucking the rest of the year into the bottle if she dies, which is pretty much how one goes about dying early... Good lord, people, do you not realize what she spent her life doing??? She actually gained certification for professional counseling, and she helped loads of people through all kinds of stuff, and then, because the media can be so brutal, she embraced it all by taking on wonderfully cute mock ups of her gains in things like this ad from earlier this year- Watch Carrie Fisher Lead a Robot Support Group In A New IBM Ad. I loved her for that.

This is one of those rare Christmases where something is NOT going terribly wrong in my family. Wrong, yes, and some are still exhausted, but let's see what a pro and con power point reveals.


So you can see, we don't have normal Christmases in my family. It's always something big and scary. This is one of the first Christmases I've made it through in a long time where I actually turned on Christmas music, and then the news ripped around the world about Carrie Fisher. I normally don't blink at celebrity deaths. I feel sad, yes, but it's not personal. Well, apparently Carrie is because it's messing me up, and I can't stop obsessively checking to see if she's still here.

I was in high school when Princess Leia showed up. She has been part of my life since I was a teenager, and I saw the original Star Wars at least 100 times. I counted. There are only a handful of movies, probably 5 that I can say I saw over 50 times.

I don't talk about the stuff I really care about. I talk about all kinds of movies and TV shows, right? But I don't care. I like the writing or filming or set designs or costuming, but it's really rare that something blows me away so much that I *don't* talk about it. Because that's what aspies do. We keep what we love very close inside, and no one gets in and sees it. Why? Because no one can mess it up that way. What we love is never tainted or marred with someone else laughing or opinionating or filthy joking or whatever to us. A long time ago my mom made a remark about her, and I ever since never spoke of her again, but she's been a major icon for my own journey through embracing all my own head stuff. I even started a guidance and counseling degree, but realized early on I'm not that kind of strong like she is, and switched to resource planning.

I'm dreading waking up to bad news, and I'm especially dreading days and days of feeds full of eulogy posts and articles. I can't go there. I very rarely contribute to or read celebrity afterthoughts, not because I'm awful, but because I cannot keep triggering over and over when I'm already dealing with so much real life. My plate is way too full, and I'm already sad. I don't want to spend the next 10 years on social media watching my entire generation of icons fade out, so I'm already practicing not being part of the big retweet, reshare, reblog grinder that keeps everyone upset and addicted, which I'm pretty sure is certainly not something Carrie would think is cool, either. It's one thing to share our feels, it's another to keep triggering into tweeting about staying drunk the rest of the year. If you truly love Carrie and want to honor her in some way, get thyself into counseling. NOW.

This is my fave Carrie cameo. She was such a good sport doing this.