*Wo*, got hit from the Bermuda Triangle yesterday.

I've had so many hits from searches for Rick Lagina again lately from so many weird places that I am sworn to get all caught up again on Curse of Oak Island first thing after everyone else gets back into routine after New Year's. Concern about both his sex life and especially his demise have quintipled again, and I wanna see why. Apparently, someone in the Mayberry made for TV movie set area has concern about it as well.

Yesterday was day 2 on Bunny's tonsillectomy, so the suckage suckededed really bad. But I think she's about past that part now and will probably be up well into 2021 tonight.

Also yesterday I finally got the last of the kitchen flipping done. My mobile office of 4 1/2 years is no longer a campsite. The long term planning and execution around this took about 2 months, but it's a solid idea. I'll skip details (aspienado wants to include lengthy details, Pinky says no) and just say I wish I'd thought of this way sooner. Genius in slo-mo, as it were.

The only drawback is that @bonenado and I can now see each other across the house into other rooms as we are both on the internet, so I'm already tossing jokes out about making cubicles. It's weirding us out that we've lost our only privacy. This house has no hallways. To be able to sit somewhere in this house without looking up and seeing someone looking at you involves careful angle planning.

I've already lost my first resolution pound. GO ME!!! Yeah, not sure how, I ate ice cream last night. This year's motto is GO BIG OR FACEPLANT, so I'm shooting for the legendary 50 pounds thing. I did it in 2011 in only 4 months. What the hell, right? I've had 20 creep back on since then, and Pinky is putting a foot down and saying ohHELLno, so I guess we'll be seeing who's really the boss of me. We haven't really test driven this new emotionally healthy integrated Pinky personality into the wilds of menu planning yet, so this might get interesting.

My other big resolution (I made only two real ones) is to stop the f*@#G whining and get published, because several friends have been publishing all around me banging my head against the minecraft wall, and another year of that will have me self destructing onto a comedy stage or something.

I just told @bonenado not to throw a protective phone bag away because he's ruined me being the big recycler that holds stuff back in case we wanna sell it. I'm like are you crazy, have you looked up phone carry bags? I actually bought one the year we flew to Houston. It was ridiculously expensive. So he asked about starting an Amazon shop, I said I have no advice, just go do it because I either don't have the time or I'll own it and be the boss and you'll cry. He walked off muttering he wouldn't *cry*, he'd just hate me. I called out across our lengthy office space that if he's successful, I'll toss lots of stuff at him to sell. He said he'll be setting up a cubicle.

So we were out yesterday running around the state and stopped in at Osceola Cheese (picked up an aged swiss, mmmm), and it about knocked me over hearing a young hipster dad asking his 7 year old daughter if she preferred the apple wood smoked aged gruyere or the hickory smoked goat gouda. There's hope for Missouri yet. And she picked the gruyere, correctly enunciating the entire phrase back to her dad. *wow* I expect great things from that kid.

Seriously, they had just about everything except buffalo and donkey cheeses.

Hm. Just discovered I don't have enough eggs to whip up a yummy coconut cream pie for @bonenado. Deep regret reigns over us, for now we must venture forth again. Today is a big cooking day so I won't hafta cook again the rest of the long weekend. Queued in fridge is vension burger for meatloaf and chicken for BBQ, plus we've got chips for cheese and salsa dips and decided to blow the year out with ice cream before we really get serial about the last big challenge on the carb cutting thingy. Ice cream is our kryptonite.

Not sure if I'll be staying up for any kind of ball drop, but I had my party yesterday, and I'm good to go for 2017. Egads, I look like I have no hair at all... It's halfway down to my shoulder blades again and wildly staticky, so I tied it up and stuck a sock in its mouth like a big bad boss. I look like aspienado on drugs. Definitely not demure. 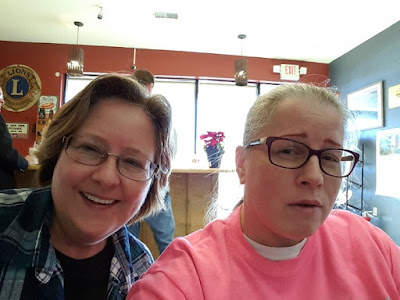 theme, focus, execution playlist
Posted by Janika at 7:32:00 AM