I mention having a facial recognition problem every little bit. Last night during a couple of new TV shows I scored on a couple of actor spottings before Scott did, and he was all like wow, you're getting better at this.

I've been paying real attention the last few months on what exactly helps me recognize people. For instance, from my original post on mind blindness-

Likewise, I get tv personalities mixed up like crazy. I never could keep Dan Rather straight from a couple of other news reporters. There are a few actresses I can keep straight because I've seen their movies so often (usually scifi movies), and by now Harrison Ford is iconic in my head, but I had no idea Steve Carell, Dan Burns, Maxwell Smart, Evan Baxter, and the mayor of Whoville were all the same guy. Do you know how many times I saw the complete Star Wars trilogy before I knew who Mark Hammill was? Probably dozens.

So you guys probably don't realize, after three months of Benedict vids, that the marker I use to recognize him across character changes is the way his eyebrows look as he turns. For some reason, I'm pretty good with eyebrows.

Since I already mistakenly auto-sub eye and hair color for everyone I see with my faulty cataloging system, I can't count on eye color since his crazy eyes change color almost scene to scene, as confirmed by rabid fans around the world and this article mentioning sectoral heterochromia. (His eyes even have their own blog.) My own eyes are a mix of yellow and brown that I think make me look kind of werewolf-y in certain lights, which I bring up in my 100 Girly Questions Survey.


The last thing on a person's face I can manage is noses for some reason, so everyone that I recall in my mind either has a blur there or a variety of noses I can plug in like a Potato Head. I'm pretty good with silhouettes, so the way a face moves means more to me than how a face is arranged. The more quirky a face is, the easier it is for me to remember and keep attached to a name, so Steve Buscemi has been a favorite for years, plus I actually like him. Cartoons and animation, on the other hand, are EASY. I never forget an artistically depicted face. 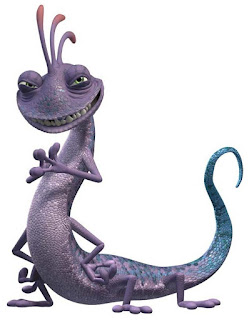 One of the ways I do most of my actor spotting is when I hear them speak. Very few actors can disguise their voices from character to character. But last night I was on point for two actors by their faces, despite some key changes that threw Scott off, and we've both been noticing I seem to be getting at least one a week now. I'm the person that watches TV with phone in hand, pausing the DVR to race through IMDB links, and I'm usually wrong, so me getting two right in one night this week was epic. I think I'm getting the hang of 'tagging' face parts in a sort of linear way so I can keep names attached to them.

I've said in the past that I'm a Sherlock fan, not a Benedict fan. I'm also obviously a Khan fan. What I need to be clear about is that I don't dislike or shun Benedict as a person. I simply don't recognize him from one movie or interview to another, so I don't attach any sort of meaning to his face unless he's doing a particular character that I'm watching. I'm very Benedict deficient when it comes to Ben fandom. It kind of hit me the other day that some people might misunderstand why, since there's been a little controversy around him here and there, which I could care less about.

I don't often see people talking about fandoms from a point of view like mine, a prosopagnosic asexual. Since I am, as a fansite owner, a highly visible representative of a show that actually uses continually sexualized characters, themes, and plot devices, I imagine it's difficult to think of me not giving an eyeblink to any of it. Lexx is brilliantly done. I love every shred of it unconditionally, like I do Sherlock. Star Trek, as some of you have seen, is a whole other beast for me, conditions galore had to be addressed before I finally embraced the new timeline.

You can see the impact prosopagnosia has had on me being a fan. I really do obsess over story lines and characters, film edits and effects, and the way I get swept up into a story. I could be halfway through a show before I realize someone I like from something else is in it, so I'm not just following actors around from show to show like many fans do. Either I very seriously love a character portrayal or I don't, and usually don't even care about stuff like Batfleck quibbles.

This has actually been a taking a break post, time to get back to the other thing I am working on.