I've lightly mocked Sumall and other analytics in the past, including pinterest business analytics, google analytics (I was a beta tester), youtube, and even compared notes between my own blogs' different traffic counters in the past. Stats are like a train counting passion with me. I took stats courses in college through three different fields, the most rigorous being sociology, and there are oh so many ways that stats can be misleading.

From What do you mean by reach, exposure, and impressions?

When we say "impression", we mean that a tweet has been delivered to the Twitter stream of a particular account. Not everyone who receives a tweet will read it, so you should consider this a measure of potential impressions. Both reach and impressions should be treated as directional metrics to give you an idea of the overall exposure the tracked term received. Use these metrics to get a sense of the size of yourpotential audience, and use engagement metrics like retweets, clicks and replies to gain a more complete understanding of your impact.

You know the junk mail you get in your mailbox at home? And the junk email you get? Impressions are how many times your tweet or post or pin or youtube has been delivered to a feed, including list feeds and hashtag feeds. Impressions have nothing to do with people actually seeing your tweet (or pin or blog post in a search or youtube), especially when you think about all the junk or bot or dead accounts that follow you. Still, it's fun to think the possibility is there. In fact, the more popular the hashtags or tag words or links you make in the text, the more often what you posted gets picked up by bots for impressions. How you hook the bots is key to putting yourself 'out there' for the possibility of being seen more. THAT is why impressions analytics are useful, you can use them to gauge how well you are being picked up and distributed.

Let's play with this a little bit. According to twitter analytics, these (below) are the top tweets in each of these months. Keep in mind what I said about impressions. For instance, this first one was retweeted by one of the top NFL parody accounts, and even though it wasn't shared or responded to very much at all, it was distributed from that retweet through a whole slew of feeds I generally don't have access to. Even then, it didn't get anywhere near my favstar top tweets. Favstar is a much more reliable source for actual performance, and I even pay for pro because I find it so useful. But back to mocking twitter analytics.

This was the week Leonard Nimoy died, and this probably remained much more private in a single list feed of friends than nearly 7000 people actually seeing it. You can see I didn't hashtag or even mention his name, but being convo-linked, it must have gotten caught up in the flurry of redistribution just by association. This is where I question how 'real' impressions are, even for feed distribution. 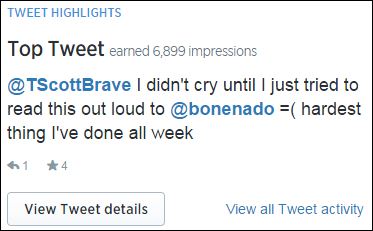 The Walking Dead hashtag is pretty good for being flung by bots into more feeds, but that show is so saturated with a plethora of delightfully creative hashtags already that this hardly means a thing.

Check these next two tweets, which were obviously actually seen by more people because they got more real response, thanks to Mr. Potts retweeting them. Andrew Lee Potts gives good tweet if you're cool about promoting his stuff.

This is a surprise. We've barely started June and already I've got this nice reach/response combo, so the impressions might actually mean something here. See the hashtags? MondayBlogs is a big deal and I've gotten some sweet traffic out of it in the past. Still, actual hits on that post at this very point in time is only 67, so I can clearly see that impressions do NOT mean much when it comes to actual link clicking. This is why I mock impressions being a thing. Yes, they are useful for gauging how I'm putting myself out, but they're useless for just about everything else.


Let's switch gears now. If that weren't enough, there's also such a thing as top media tweet, media meaning graphics of any kind, like pictures, videos, vines, etc., basically a tweet with an attachment. These are big deals because when they go viral the numbers go crazy. I've never reached a crazy point, but I admire some who have, although it's difficult to admire users who have figured out how to swipe the responses by coopting with the 'quote' option, which knocks you into the 'mentions' category of analytics. Since places like Ana Tweets don't count being quoted in their top mentions, your best actual response can still be completely missed or glossed over, so there is a bit of outcry about quoting being a form of cheating in order to steal response off other people's tweets. I actually view being quoted and my response being 'stolen' as a compliment, it means my tweets are worth something to other people. You won't see that in analytics.

But back to twitter analytics. Top media tweets are useful for perking up your timeline. If you're depressed about having a slow response day (because you're a real person and don't buy followers or have a ton of bots following you), just toss out a couple of cute pix and voila, someone retweets or likes, so you know your feed hasn't turned your entire reader base into zombies. Want to see what your readers respond to? Media tweets are a quick and fun way to experiment.

This one really was an experiment, everything about this tweet is so rare that pretty much the only way it got noticed was by fans who look for these things and this actor in particular.


This is my most 'impressive' I think (ha, pun), because without a single hashtag I got this many impressions from a group of people who use a list feed to stay in touch. This speaks volumes for that list feed distribution.

It helps to be live tweeting with a television show if you're looking for a way to be seen by more actual real users as opposed to twitter bots. Reading live hashtag feeds are the new 'reality show' of the internet.

Tagging relevant accounts (we all hope for retweets) when we promote others usually helps jack the numbers a little, and always try to squeeze a hashtag in there somewhere. Being more specific would have been better, but I ran out of room. The #scifi hashtag is so vague that I'm sure this tweet was buried very quickly in that hashtag feed. I think I pushed the same media/link later with hashtags like #spaceship, but this one got top tweet since it was retweeted by the show creators and one of the actors.

See what I mean, rev up a slow day with an oldie but a goodie.

We've all seen people who get tons of retweets every day, and we wonder how that's happening, since they don't seem to be doing anything else but tweeting. Some get lucky, but a lot of it is either about turning networking into a game, or paying money for upgrades, promos, and followers. My twitter account is 'organic', meaning that most of my followers are real people (even the parody accounts) and I don't play the follow back game. I grew my twitter from scratch mostly on my own work and I really don't care about numbers. If I did I'd have over 4000 followers by now, but I keep banishing and purging.

Numbers are fun, but as I keep asking, do they really mean anything? Some of my best days have the lowest numbers attached to them. Why do I call them my best days? Because an actor or film maker or private club might have DMd or PMd me. Because I might've had a really cool private convo with someone. Because I might have noticed half the world hit a particular blog one day out of the blue and realized someone linked me somewhere, which is a nice compliment. Because I might've discovered someone hacked one of my youtube chicken videos into an Asian porn site and laughed my head off. Because I might have accidentally run into someone saying really cool stuff about something of mine that they took the time to translate into another language.

Slow days are good days. I don't have to see what's happening in analytics to know how I'm doing. It's fun, yes. It's good brain exercise to think about strategy, and good practice doing experiments, but don't let analytics be your 'report card'. What an auto-bot algorithm might tell you is your best work might actually be about the stupidest waste of time you ever did, and it's easy to feel disappointed that something we thought was more important didn't even make the bottom of a count list. Don't fall for that.

I see tons of advice floating around on how to build your media presence, blah blah blah, but in my experience, all you have to do is create a unique name or phrase and then attach it to hashtags, pictures, and links of all kinds, and then you pop up in all kinds of searches. Sheer numbers that never get measured are how many times pictures in search engines will click to something you created. The easiest way to get noticed is with variety. Tweeting or blogging the same thing over and over doesn't build web presence.

I'm afraid there are only two ways to get big numbers- with big money or big work, which includes persistence. They say do what you love, right? If you don't love doing what it takes to get the numbers, why are you worried about the numbers? Actors work very hard to get where they are. Film crews work very hard and sometimes dig deep into their own pockets to get where they are. It's not magic. You want to be a success? Either shell out the dough or work hard. Preferably both. 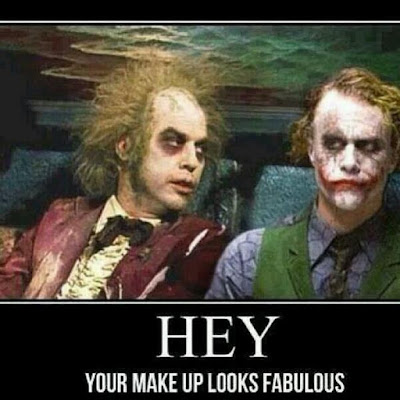