the emotional value of virtual worth- report card time

I had a great day yesterday. I accidentally found out bumping into one of the top 10,000 sites in the world (as reviewed by another one) that, thanks to my blog host remaining so strong in spite of major server moves (according to alexa, according to webstatsdomain), that my fansite is worth nearly $25,000, if one can really estimate dollar worth by the rankings.

I posted a disclaimer.

I came back public just a little over 3 years ago not at all intending to resurrect my Lexx stuff. The only reason I started doing that was because my traffic spiked by hundreds of percents when I mentioned it one day. I decided that if I really do bring it back, I will do it as professionally as possible, with focus and a mission statement, and never delete it again.

One of the challenges of growing and maintaining a fansite is remaining true to the reason one builds it. My goal is across the board fandom support. I have a history, I own who I am, and I have hopefully grown up. Being able to do what one loves is a precious delight, and I love thinking about Lexx. 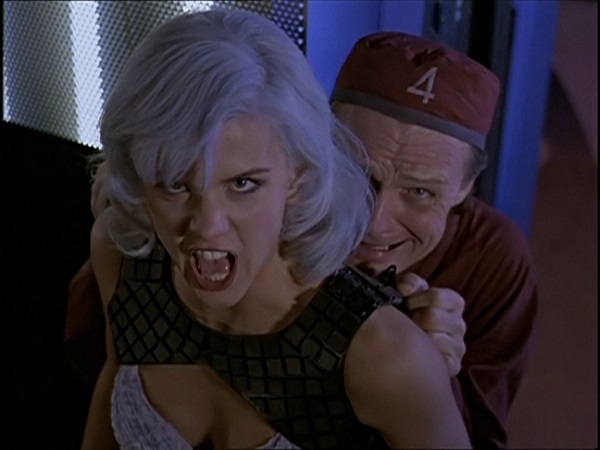 Because I have affected so many people, I made a decision coming back public to be real. This means learning to balance public and private. I am a real person with a real face and a real life full of stuff. I don't want to use Lexx to get attention for my personal stuff- I don't want to mix the streams. However, it's important sometimes to reach real people. Entertainment has its value, but without all the fans in all the fandoms having real lives, entertainment becomes hollow, shallow. For entertainment to have value, it must touch real people. The more deeply we identify with stories through our emotions, the more meaningful fandoms become.

I started rebuilding while my world was still pretty dark. I am finally in the recovery stages of years-long illness. Three years ago I was just beginning to be able to read and watch television again. I've publicly documented my progress at spaz starting on 3/17/11. One of the reasons I started blogging real stuff is because, after losing a family member in 2004, I realized that was the coolest part of her, seeing into her head online. Historians love finding old journals and diaries, and blogs and facebooks are the nouveau memory catacombs (Lexx fans will appreciate the reference). I'll be honest- the real reason I'm blogging is because so often we're too busy in life to stay in touch with people we love, and it'll all be here if I go poof. I'm such a terrible recluse, I decided I don't want to take it all to the grave with me. At any rate, as I keep working little by little day after day, my health also keeps improving.

My Lexx work, as always, happens on some of my hardest days when I need the most distraction. Sometimes I write, sometimes I code. As it turns out, apparently, some of my work that involved wrangling with ID inserts across the webs verified me as an owner, and sticking with Xanga instead of bailing kept me ranked well, so without having a clue what I was even doing, I seem to have accidentally created a marketable web product. There was a time when I was given a very nice opportunity to move my Lexx into other hosting, and as I came back public I also seriously considered other umbrella options (Nerdist is very popular), but I reasoned that remaining rogue and standing alone (a very Lexxy thing to do) would be my most visible bet, even if I did have to laboriously learn the ever-changing all-new web presence ropes and climb my way back up a mountain, grain by grain. The web world has changed so much since 2006.

I have never monetized my blogs. I avoid dollar signs around my Lexx blogs like the plague. I don't own Lexx, and I think everything I do should be free for fans out of my own pocket. BUT, as it turns out, it was pretty cool to learn that even without monetizing, my original core fansite is worth $24,700. No, I'll never take bids. I just want to make it clear to anyone who ever questions my authenticity or ever makes another attempt to coopt or sabotage that blog (that I've paid dearly for to keep ad-free), I probably have legal claim now. I'm not trying to be abrasive or defensive or arrogant, I'm just saying that I worked very hard for this, I'm trying to do it right and keep everything legal so I can support my fave show, and I really hope the fans understand heart and soul went into it during some black times when I had a very hard time finding anything else to live for, both through physical illness and severe depression. The most valuable lessons came from those who demanded the most from me, and I'll emphatically state in several people's defense right now that if I hadn't learned while I was being kicked down on the floor, I would never have learned go big or go home. Do I love Lexx enough to stand back up? Hell yes I do. This is about Lexx and my love for Lexx now. This is about me growing up.

That snip up there- I feel like I got an A on my report card.

I'm not crazy about getting gooey with my feels, but I really do love fandoms. You guys know I love you, right? You save me. I can't apologize enough to all the people who've suffered my asperger's along the way. Thank you to everyone who has been a part of who I've become.