I dreamed last night that way in the future, a really old library in St. Louis had the last remaining section on twitter, and it was devoted to Star Wars tweets. They were divided into 3 sections- parody accounts/tweets, movie quote tweets, and fan gifs, which were randomly playing around the library aisles like full adult sized holograms. I blame this dream on a few twinges of possible (but not really) regret during my recent mass unfollowing of useless Star Wars accounts and an article I ran into last week about how the Library of Congress actually attempted to document twitter and gave up after a year saying that our millions of thoughts would need far too much work and storage space and could never be properly reassembled into archives outside of twitter itself.

I also dreamed about living in a really old building that was rotting out, and a giant tree limb had grown into one room over a dining table and was covered in a big web with millions of spiders and other bugs. It bothered me very badly that as bad a shape as this place was, it still commanded a high price as living space. I sort of blame this dream on a combo of playing minecraft and watching both Divergent and Insurgent within a 24 hour time span.

And then I dreamed both these things were all actually one big place over time, and I got to see how it became demolished bit by bit and renovated into futuristic new materials and hallways and furniture and people, and I'm going to blame it on this cool tweet I saw come through last night, because I have always loved anything timey wimey since I was a little girl. It's up to you how far you want to take the emotional metaphors in my dreams, since I am spending my month redirecting out of a rut and creating a new work plan for this year. You can check out the book on Amazon and click this snip to get to his account on twitter. 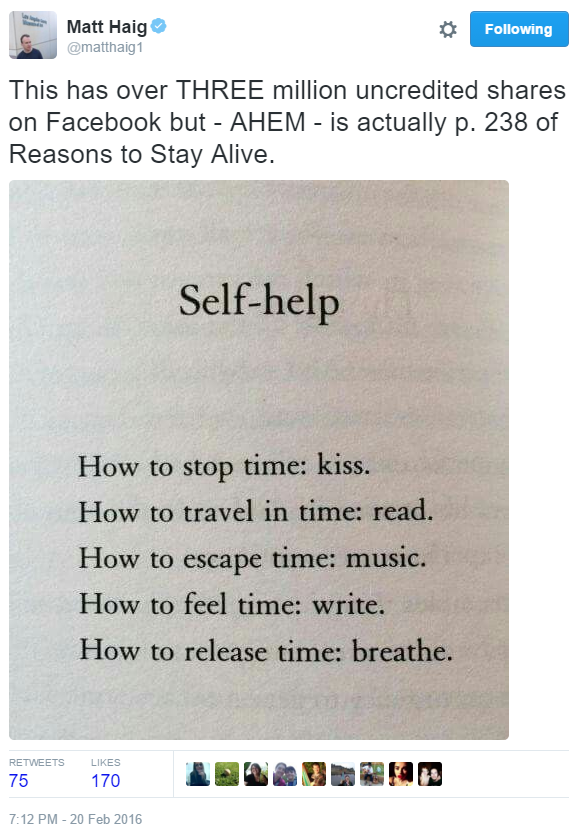 And then he tweeted this. Yes, it clicks back. 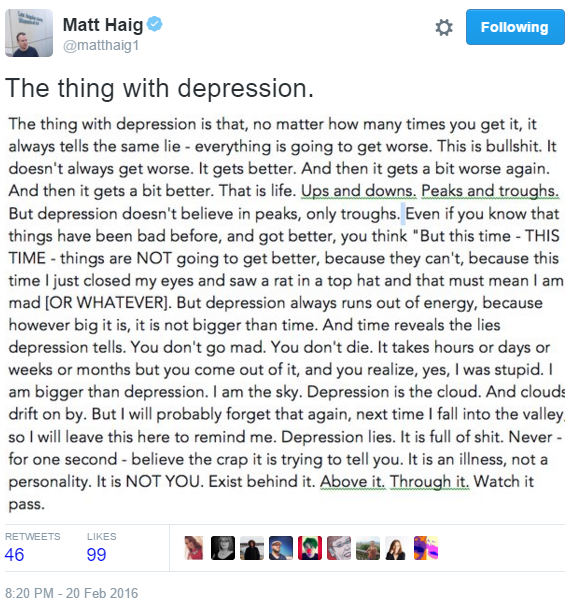 One direction I'm definitely staying away from is not being truthful about who I am, especially on networking sites. It's one thing for people to make parody accounts, which I find entertaining, it's another for people to actually list specs and credentials about themselves that are erroneous. I've openly stated I use a pen name registered with a publisher, and at one time paid to use it as a business name. However, I don't appoint titles or descriptions to myself (so many entrepreneurial CEOs of startups out there), and I don't say I'm somewhere I'm not (it's cool if people want to identify with 'the biz' in Hollywood or the UK or whatevs, but allowing others to believe you're actually there physically when you're not is called 'conning'). I am a real person in a real place dealing with real stuff and trying to do real things, and I'm still just discovering how much my own reputation has been dented by connecting so deeply with a few others that don't seem to understand the value of social media cred beyond being popular for talking a lot.

Before some need to protest, I know all about juggling a public social media presence with a dangerous past, so yes, I don't think people should publicly share physical addresses unless they are real business locations. That being said, there was a person once about a year or so ago that suddenly blurted something on twitter that I had to ask be removed, and that person knows better. So I find it interesting that person still lists erroneous info as legitimate business cred.

Part of my problem lately with this big flip into a new direction is the anger I've bitten back for a long time about not being taken seriously. I finally just had to spell it out- I felt duped. I felt baited and reeled in like a total noob, and then my sense of naive aspie loyalty was played until I was so confused that I got stuck in philosophical self questioning. So while some of you are wondering what in the world is going on with me suddenly diverting into minecraft and seeming to be going nowhere, I'm wrestling with some very emotional depression over the winter and being guided into calming down between a psychologist and a good friend who knows how to redirect and keep my mind on something in lieu of self destructing. That's important.

Part of the big change is friendships. I am totally on board with social media saving lives. Sharing and touching base are pretty awesome when you need them the most. However, becoming dependent on social media as opposed to getting real help (supervision, meds, actual real people looking at your actual real face and smiling actual real smiles at you and actually listening to you actually talk) can be like spiraling out of control down a black hole. Twitter is not a cure for depression, guys. It's a crutch. Yes, it's a very good crutch when we need it, and some of you saw me tweeting around the clock for months at a time there for awhile, but it's still a crutch.

It takes a few guts to step out of your real actual door and find real actual help. I totally understand that. I have lived through unimaginable anxiety and PTSD. It has gotten so bad in the past that I'd pull out of traffic on major highways just to get out of my car, or drive in freezing sleety weather with my windows down because my claustrophobia would be so bad. It's gotten so bad at home many times that I'll suddenly drop everything I'm doing at home and drive into town (that first 15 minutes on a highway is horrible) just so someone will see me die if I drop dead, and I won't be all alone (because depression lies, especially in the middle of having a nasty anxiety attack), and sometimes it's so bad that it's all I can do to lightly touch my steering wheel with my fingertips over and over while I chant or something because I'm so terrified of my car.

I've had one of my best winters in at least 12 years. Best Christmas in ages, best health in forever, and what you guys didn't see me grappling with nearly every single day was pop up suicidal thoughts. I don't want to die. But I have PTSD and severe depression, and several people on social media were triggering me over and over and over, and after weeks and even months of asking them to stop, I finally just lost my temper on 3 different people, 2 of those were pretty public.

I don't want to die. Neither do other people who are hiding severe depression. Not everyone is as brave as me asking 'friends' to back off. It takes a lot of guts to stand up to people who are used to tagging you a lot. My anxiety was going out of control again, especially on major highways. I was once thrown from a violently flipping vehicle. You guys have no idea the trauma I'm still working through from my dad pulling me out of an ER and taking me home with internal bleeding without a single x-ray. I had absolutely no mental, physical, or emotional support from my own parent through a car accident that should have killed me. I've had to deal with aging parents and my stupid childhood flashing back while I'm trying to write a very honest book, and through all of this, I have yet to hear one word of comfort about finally dealing with the loss of my friend to a murder or watching my mom die very slowly from a person who claimed to have read everything I blogged. Is it any wonder I blew up on Christmas Eve after being PM'd about someone's one of two moms taking some Christmas presents away. I wanted to say grow up, but I realized I was the one sticking around for that drama. Maybe it's time for me to grow up.

Friendship is about balance. I am trying to find my balance and keep working. I'm dealing with cognitive disability doing it. My last attempt at honesty was returned with being unfollowed on other accounts and no closure. You know what? I would be stupid to take that bait and pursue answers. There are no answers except that I was gullible again. If I'm the one making the same mistake over and over believing people when they say they love me, then I'm the one who needs to take at look at why that is happening. I'm easy. I make a good pet. At first...

And then I start digging holes all over the yard and leaving half eaten mice in shoes and taking off through windows and fences, and the head games pivot around who will last the longest in another unbalanced relationship before the explosion happens. And it did happen.

My job on this earth is to put stuff into words. That is my natural inclination, to wrestle with how to say the stuff that's hard to say, how to make it easy for other people to understand another point of view, how to share ideas that are difficult to talk about. I believe I was born deficit especially for this calling. I've had to work so hard to get to this point, and I know what I have to share is important. It's worth the work and all the time and effort, and everything I go through and learn about myself adds depth to what makes what I need to say so important.

Depression is not a game. You don't ice it over like a cake. You don't tell people they have to keep their masks on. That's conditional love. A lot of people don't seem to understand the concept of conditional love. Don't even call it love, ok? Stop baiting each other with the word 'love'.

True love is doing everything in your power to break down the walls that are hiding what is killing people.

That is why aspienado was born on this earth.