The story of Honeybee, from Honeybee... One Person's Theory. Interested? Find all the right links about Steam Powered Giraffe here. Pinky Robot loves this stuff. She knew I would.

I like the word honey. Honey was our main term of endearment growing up, and since fond terms of endearment were rare in my family, I cherished being called Honey on rare occasion by people like my granddad. Because of that, I knew under the gruff there was a guy with a soft spot. I can't say definitively, but I think I'm the only grandkid that got to know him as well as I did during a long car trip across several states. I never told him that I've always wished I'd been named after him since I was about 12, easily adaptable to Claudette or Claudia. I got the idea from a Christmas special with Andy Williams and his then wife Claudine Longet.

They say you catch flies with honey. According to twitter analytics, 80% of my followers see my tweets on desktop and laptop computers. Statcounter and google analytics both say over half my blog readers come in on mobile. Since most of my initial traffic to Pinky blog jumps over from twitter almost immediately (first hits), that's pretty much locking down on mobile notifications, so apparently the majority of my first readers come from the tech savvier 20% of my twitter followers. I guess moving to a mobile friendly blog on a giant platform was my honey.

We had this album. A Taste of Honey was my favorite piece.


This is twitter honey. It's not much yet, compared to professionals, but if you're blogging regularly and don't know about twitter analytics, you need to check it out. I've never seen this happen before with a blog link tweet, especially during such a drastic drop in my overall twitter presence. Keep in mind that twitter impressions does NOT equal link clicks or blog views. Impressions are how many eyes could have seen your tweet when they opened their feeds. Still, that's a pretty sweet number for one of my blog links, especially in only 24 hours. 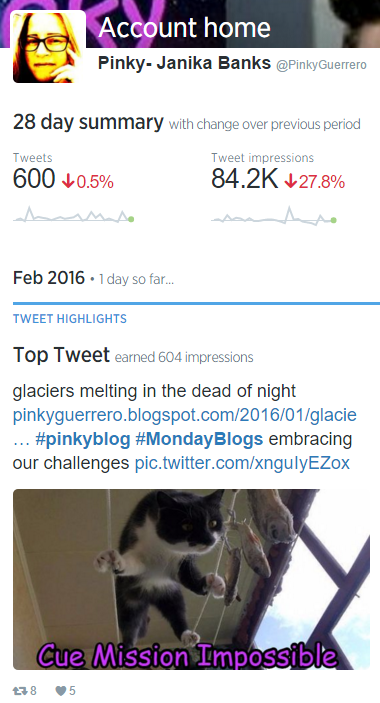 We used to bring home several gallon jars of spun honey from Kansas when we drove out for holidays once a year or so. It was the best honey because it came straight from beehives and had never been extracted with heat, a beautiful thick pale golden syrup that sugared up over a long time. Because I grew up on top quality honey and became obsessed with it, I can tell at a glace in stores how honey in jars has been processed. For several years I sampled a variety of special honeys from all over the United States. Tupelo is my favorite- "Tupelo Honey is the gold standard by which all other honey varieties are measured. For two weeks every spring, White (Ogeche) Tupelo Trees in the Southeastern swamps bloom with fine sunburst-shaped flowers that glisten with nectar." I've also had white honey flown in from Hawaii, one of the rarest honeys in the world. It's probably not a surprise that my favorite candy for a long time was a taffy called Bit-O-Honey. We didn't get candy very often.

I don't look at twitter analytics very often, mostly just to see how Lexx tweets are doing. This was my top tweet last month. I once held this sketch in my hands. I wish I had it back sometimes, but I'm pretty sure the fan who has it now is taking good care of it. This is Lexx honey. You can see more captures of Kai holding a baby cluster lizard here. (This artist is working on a surprise for the 20th #Lexxversary, to be announced later this year.) (Guys, I'm all *mind blown*, srsly.) 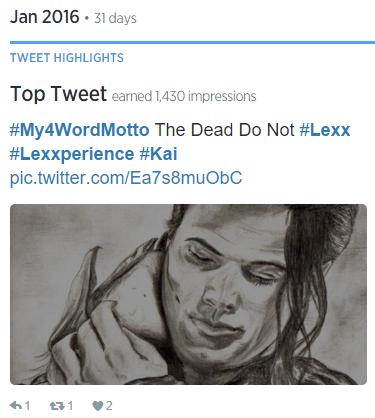 I'm not very good at the arts. There are artists and musicians out there sharing wonderful things, and I've often wished I could share the things I see and hear in my head. The only thing that comes out is words, and I've stumbled for years trying to make the words work right. I am learning how to get report cards that help me assess how I'm progressing. I had to size these down a little, but they click out to bigger if you feel the compulsion. Basically, I can tell from twitter analytics that my best twitter traffic comes from #MondayBlogs and Pinky Press Review. This first snip is over the last month, the second one is over the last week. 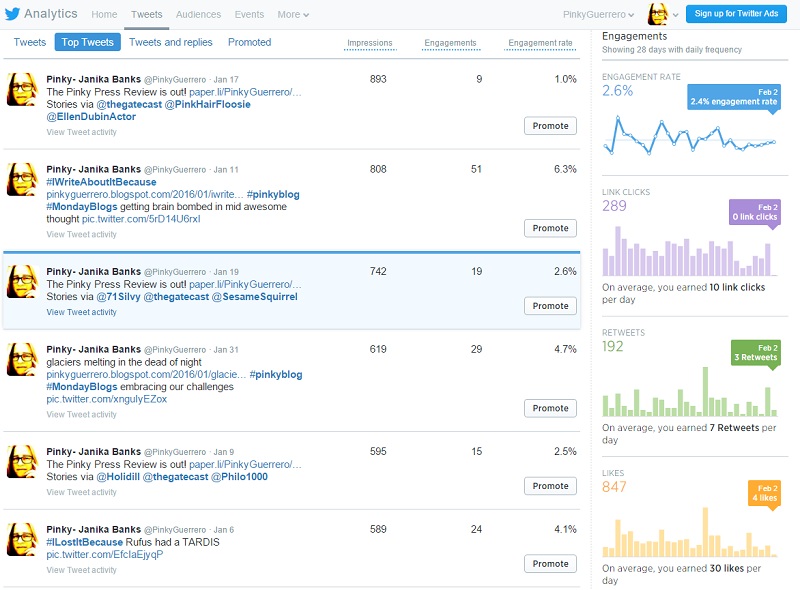 You can do this too, if you're linking to blogs from twitter. It's a nice way to gauge what sort of hashtag team gets you the best exposure. You can also experiment with the best time of day to tweet and stuff, what sort of descriptions and pictures work better. 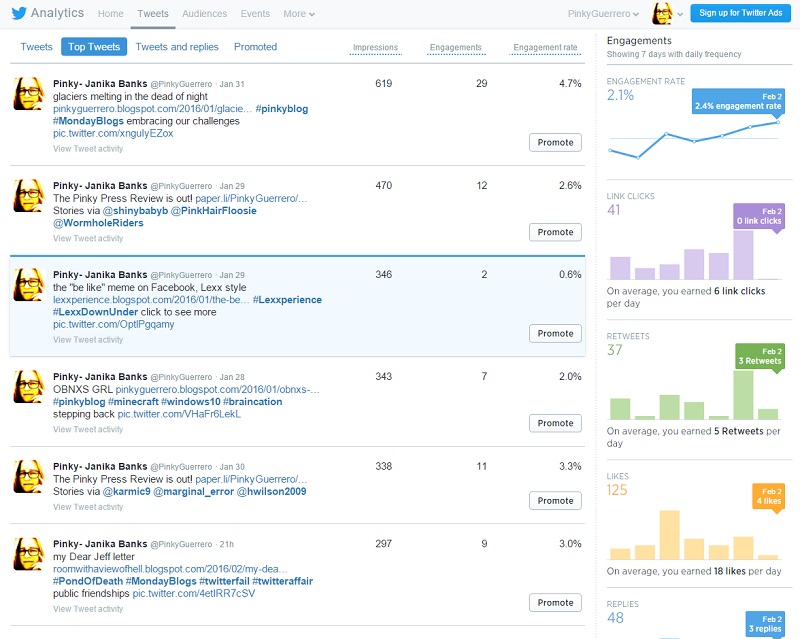 Aspie-autie kids can be challenging for parents to understand. I went through a phase in first grade where I was nearly late to school while this song was at the top of the charts. I had to hear it on the radio every morning before they could peel me off of it and get me to leave the house, and I would cry and cry on the way to school. No one could comfort me, and no one ever knew why I was so sad. Given what we know now of Pinky Robot, one has to wonder if we somehow know before we're born some of the challenges we'll be expected to rise to. Some children exhibit behaviors and have memories that don't belong in their current lifetime experiences. hybrid- how robots go on


That song still destroys me every time I hear it. It lends a bit more depth to why Pinky Robot loves the Honeybee story. 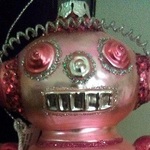 Back to actual engagement. Pinky blog didn't start out with the intention of capturing this much attention. Robot Test Site It's a personal journey through a labyrinth of locked up emotions, solving numerous riddles and puzzles along the way, but the goal has always been clear-


I worked so long and so hard, believed with all my might when it was still so dark. You guys need to do that, too. Make your Plan, discipline yourself to a Goal, assess your Progress, and BELIEVE. I didn't start out expecting much more from statistics than 30-100 hits/views a month and enjoying looking at the maps of states and countries they come from. (I'm a map enthusiast.) Analytics aren't a magic potion for making things happen, but they can be very useful for looking back over time and spotlighting what worked when you do notice more readers are showing up.

Also, you can see lots of other cool things on twitter analytics. For instance, 18% of my followers make over $75,000 a year. That doesn't mean they read my tweets, but it's fun to see what top grocery item is being discussed (consumer behavior), or genre preference breakdowns (lifestyle), or your top follower regions (demographics- my top two are England and California, in that order). Since I'm diligently sifting out the bots and spammers, my own analytics probably have more applicable meaning than some others. Accounts like God and tweety-tweets and the hundreds of Santas probably skew analytics by simply inflicting their presence in your follower lists.

Anyway. Time to get back to my chores. God, I love fans. Have I mentioned I love fans? Some of you are pretty messed up, you know that, lol. In a cute way.