I imagine this must be more boring than Sheldon Cooper's Fun With Flags series, unless you're a stats enthusiast, but I'm weird, so here it is. I've been doing these reverse experiments with twitter, have unfollowed over 1000 accounts in the last couple of weeks, and I naturally assumed that would have a more devastating impact on my twitter analytics. I was wrong.

One of the biggies in analytics is engagement.

What is a Good Engagement Rate?

"Often, people wonder if they are using platforms like Facebook and Twitter correctly because they have what they would consider to be low engagement rates. As it turns out, most people average around 0.5-1.0% engagement rates on platforms like Facebook and Twitter, as well as many others. Because of Facebook’s News Feed algorithm and other live stream-style feeds, reaching your audience, let alone getting them to interact with you can be a challenge. Just know that a 1% engagement rate is no failure."

"One of the lessons I like to stress upon my clients is the concept of active users... everyone on Twitter, all of us, has a very limited number of our followers reading our tweets at any one time... 10 per cent of 10 per cent is 1 per cent. So, if you have 1,000 followers,... at most, 10 of them are reading that tweet you just published."

This is my engagement over the last 28 days, which includes my higher following number from the beginning of the month.

This is my engagement over the last 7 days following far fewer accounts and my unfollowed followers reciprocating by unfollowing me. On average, my engagement has held pretty steady. Clearing out useless accounts hasn't affected my engagements at all. This includes a mutually blocked account that used to tag me up to 100 times a day through the week.

And even slowing down, I still earn about 3000 tweet impressions a day.

This is over the last 28 days.

This is over the last 7 days. 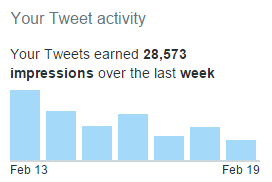 You guys know how I feel about impressions. All that means is the potential for your tweet being seen, not actually seen. Impressions is how many feeds your tweets wind up in. Having a friend or two with higher follower numbers or being retweeted by a celebrity is fine (and fun!) when it spikes your impressions once in awhile, but if you're serious about your timeline, you really need to depend on yourself and learn how to socially engage on twitter. What you want is clicks. You could get 700 impressions on something and only 5 clicks on your link. What does that tell you about impressions? A whole lotta eyes were closed or pointed in different directions when your tweet rolled through their feeds.

If you want to tighten up any percentage, get rid of everything that gets lumped into it but doesn't contribute to it. My engagement, while once helped along a little by a few accounts that no longer support #TeamJanika, continues to hold steady in spite of that loss of support because I've carefully removed a whole bunch of other dead weight. The importance of this is how it impacts all those ranking algorithms out there judging your websites and blogs, how 'real' you look compared to how spammy you look. Big numbers can backfire in weird ways. More doesn't always equal better. I'm all for a really good parody account (some promote actual merch, usually books or podcasts), but if you're not reading their tweets, why should they read yours? If they aren't retweeting or even liking a single thing you tweet, and you're not reading their tweets, why are you still following them? Don't let the myth of big follower numbers make you forget how to do seventh grade math, ok?

There are so many useless accounts on twitter. I keep saying having a big follower number is meaningless, right? (Unless you are Wil Wheaton or William Shatner or something.) There are spam accounts telling us how to buy followers, so big deal. "CEOs" and "keynote award winning" people likely purchase a starter kit. (I've had a convo about this with Ellen Dubin, who chose not to use an agent to buy followers, much respect for that, so follow her.) Also, so many of them are spambots full of junk that the only usefulness they seem to have for regular people is adding another follower number to our tallies. I'm showing you guys that is dumb, and that having higher follower numbers doesn't contribute to social media power. If you want to be taken seriously, you need to take your own structure seriously, including how it looks to others if your 'power base' is constructed on spam and porn followers. I feel even more stringently about who latches on because they want fallout from what I'm doing. I can't tell you how many legitimate entertainment business accounts I have unfollowed with anywhere from 50K to 2M followers, just because 1- they absolutely bore or perturb me and 2- they never did a thing back for me. (Liking a Lexx tweet one time in 6 months doesn't save anyone. I have nonfollowers who do more than that.)

On the other hand, even if a number of accounts don't follow me publicly, they keep me on mobile alert around the world because of Lexx, and a few because of the whole aspienado/fandom thing. No one has to follow me to see what I'm doing. That is the goal. That has always been the goal.

Well, except no one can see what I'm actually doing, haha. Yesterday a really long coral snake was crawling around, thought I'd go whack at it with an iron sword, and I was wearing iron armor, but the more I whacked, the more vicious that thing got biting me, and that snake chased me up the mountain all the way back into the house. No idea how to beat it. May hafta make an enchanted diamond sword and wear diamond armor or something, because I'm pretty sure I'll run into it again sooner or later. And before that, all I did was step out of the house in broad daylight, and no sooner was one foot out the door than a blazing pegasus from hell was all over me, and Kai heard the commotion and came to my rescue. Thought I'd do a little run-through this morning and share what we've built so far in Dr. Zhark's Mo Creatures multiplayer server and a rat totally surprised me, and then you get to see me die because something else pounced on me and stole my sword and part of my armor, and you can see why I'm paving a little road up the mountainside if I need to run away fast when I go out and chop wood. The coolest surprise was whacking through a tangle of leaves from a giant tree along a steeper side of the mountain and accidentally blowing up a creeper that had gotten stuck and caught in it and was so buried in leaves I couldn't even tell what it was. Neat way to get some flint. I have no idea if all those leaves cushioned the blow, probably should've killed me because I was right next to it when it blew up, fireworks going off everywhere, running like mad... I might turn the video on more often, see if I can catch more stuff like that, but for now, the first tour.