living out loud, and spelling it out

I make jokes about being an evil villain, like I'm on a power trip.


Most of you know it's just a joke. Yeah, I'm evil and on a power trip, but it's still just a joke.

One of the perks of people knowing who I am is getting to know a lot of people. One of the drawbacks is standing out and being a beacon that brings problems down on people I care about. It's a double edged sword representing a fandom, because ridiculous things like this happen. It's actually in backward order like this, you can see it correctly if you click it to the source. 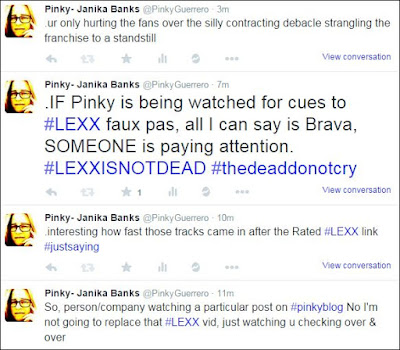 This is what started it. I wasn't upset, just joining in a hashtag trend (like a game) with a #Lexxperience link. Fans who follow me on twitter see me do this several times a week to promote Lexx. People who don't use twitter might not understand that hashtagging really is a game that goes on round the clock forever. Really clever people get lots of retweets, but I mostly just retweet other people's wit and plug Lexx into the feed once in awhile.

I'm still not upset. If you click that snip to the source, you can click from there to the post I made, which explains everything very simply. It's nothing to be upset about, because youtube pirate vids disappear all the time. I'm usually pretty careful not to place vids like that on my fan blogs. I don't support video piracy, I don't encourage people to illegally upload hijacked material, and I generally don't link fans who do that. And there are plenty who do illegally upload to share because Lexx is so dang hard to get, as you can see from the Lexx wiki link I linked in that post about who owns what rights to which parts of Lexx. Lexx was marketed very weirdly, had/has multiple content owners, was split up for awhile until Echo Bridge gathered it back together for world distribution, and now it shows up once in awhile in streaming contracts and then goes away again. Thank goodness it's still a retail product, even if it's not the original product with all the tidbits.

What I am is sad. I don't mind taking target hits. I don't mind being watched. I don't mind being snarked behind my back, or discussed in offices, or thoroughly perused and even downloaded, ripped off, and copied by underground fans in remote areas of the world finding ways past heavy national/international internet regulations and restrictions. The corporate suits paid to scour and scrub web content over legal jots and tittles are only doing their jobs. Part of the irony of LEXX is how it manages to keep thriving despite the nearly complete demolition of both the product merch AND the fan base. Some of us keep raggedly gathering and quoting Brigadoom to each other, mostly in private so things won't disappear. Well, lately, it feels like things disappear because I stand out like neon and make them easy to find, which makes me feel sad.

So, right after I point out this week that someone in a country that severely restricts women's rights has discovered something I've written about a female Lexx character being stripped of her rights and made into a slave after she failed the wife bank, and it's gone viral over there, what makes me sad is that over HERE my twitter linking to the fan blog is being watched and used as a tool to find illegal Lexx content. Right now, my fan blog is the only connection some underground people have in a severely restricted country to the ideation that human rights and dignity actually do exist, and we really do create stories about how others suffer. We can empathize. That is something to hang onto when you can legally be beaten to death over something we hardly blink at where I live.

Lexx content is the heart and soul of eloquently addressing human atrocities in a way that doesn't create local political upheaval, because it's not on earth. Except for season four, which is extremely tongue in cheek, there is no mention of any earth governments, no one to blame or point at. Lexx is a story free of moral platitude. With Lexx we can take a hard look at genocide, slavery, population control, social control, perverted justice, you name it, Lexx has it. Lexx is a fantastic vehicle for discussing the natures of Machiavelli and Dante and Hitler without upsetting the delicate stomachs of political activists, because it's not on earth. The only time someone approached me, very publicly I might add, about having a problem with Lexx was about a lack of racial balance during filming. Given the content, several of us around the globe were put off that the content was completely overlooked to haggle about something like that, especially in an international production. Otherwise, most people blow Lexx off as a 'sex in space' show.

Yes, I am sad. Not because the Rated Lexx featurettes got removed, not because right after I tweeted a hashtag joke a certain post on my Pinky blog was checked *again*, but because the people haggling over property rights are completely missing the real people living horrible lives who are actually finding something to express how they feel living hopeless lives.

So a video disappears about how 790's shred of brain really came from a woman who was tortured and killed and repurposed for parts in robotic drones. So what. It's just a video. But some of us still have that on DVD. There are fans out there who will simply just reload it somewhere else and I'll never know about it except by accident, like I did this last round. You see, it's not that the Lexx videos are titillating for fans to drool over (like Ben Cumberbatch vids, amIright?) but a story of how horribly people were abused and still kept finding ways to fight the system that was destroying them.

Lexx fans- let me rephrase that- LOYAL Lexx fans won't let Lexx die. The more Lexx is rooted up from the public, the more underground it will go, because it represents all of humanity under all repressive governments.

I'm proud to be a Lexx fan.

I'd put a Brigadoom vid here, but it would just disappear. I'm no longer linking Lexx vids so they won't disappear. I call myself Arch Heretic in other places, and I'm one of the biggest Thodin and Stanley Tweedle fans on the planet, and it's getting a little obvious that any time I link a Lexx vid it disappears. In lieu of Lexx, I will put a vid here that I hope expresses how I feel about the Lexx fandom, all the Lexx creators, staff, and actors, the opportunities I had to see it and own it, and the people who made such huge impacts on my life because of Lexx.