My name is Pinky, and this is my Haus

My date with neuro guy went pretty well. Got my physical therapy referral, yay! Answers to my questions included finding out the original 2007 'unremarkable' was upgraded last Feb. to words like 'moderate' and 'significant', and now the goal is to find out over the next couple of months 1- whether I can keep controlling this on my own, and 2- if this is a progressive arthritic condition or basic wear and tear. Since this is the most common area for back pain, they see this a lot. 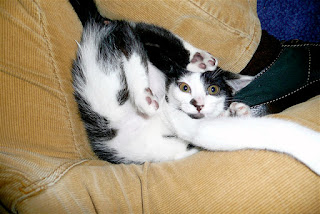 So yesterday I got more x-rays, next week I get nerve conduction on left lumbar (since the pain spikes feel like arrows being shot through the top of my foot when it flares) (seriously, I jump like I've been stabbed through my foot), and from there he might want to see another MRI and then follow up in a couple months after PT is over. My core is still really good, I just need to pinpoint and cinch up the muscles I'm not using correctly around Bunny and hopefully get some control back over flaring this up over and over, because I'm going downhill again when it hits.

Kinda stalling out a little lately, so Plan time. I've gotta make sure that canceling the accidentally duplicated Sept. auto pay on my Kaspersky doesn't cancel my original Kaspersky package that auto pays in May. I know! I remembered!!!!! This has been a very surprising year, I'm remembering all kinds of things lately. 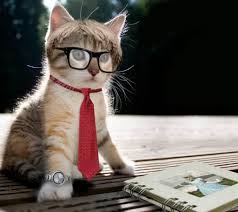 I have no idea when the roof will happen. We've already got a check in our hands, and Scott's already had a contractor out, so I'm hoping soon. Scott has commanded me to call the internet guys and he's gonna call the Dish guys and see if we can jury rig something so we won't be killing each other while it's happening. New roof on top of football and new shows starting back up, gotta keep it exciting. I'm already crabby with him because he wants to buy half a pig off a yard sale list on facebook, and I'm all like yeah, let's buy a kill from a total stranger that isn't legally processed and certified according to food safety laws like you'd at least get at farmer's market or an organic whole foods store. I asked him How do you even know it's PIG, what if it's HUMAN... And then the convo turned to him saying Bunny's mama should throw out her little chair because a stray cat sat in it, and I'm all, wait, you'll eat human meat, but you'll throw out a chair a cat sat on. (This is why he likes me still being in bed when he's getting ready for work.)

So last night. You guys.

I vaguely yap here and there about fandoms, and I insist now and again that I love lurkers, and after last night I'm going to tell you why, but first, a little history to make what I'm about to say way more meaningful.

I've been around a real long time. Before most of you even knew there was a Pinky, now happily swan diving into the Sherlock fandom in between The Walking Dead live tweet reviews...


..there were the Merlin and Doctor Who fandoms saving me.

Before that I was underground in a really really dark place for awhile, and I went deep into Stargate, Farscape, Jake 2.0, Hatter/Alice, and stuff like the Terminator, Matrix, and Cube movie fanvids. I wasn't online, no one saw how black it got, but fandoms rising up and taking over youtube pretty much saved me when I was slipping through all the cracks of medical intervention since I couldn't make it through entire shows for nearly three years. Since that's a lot of stuff, maybe just one vid.


Before that I had the Lexx fandom colliding with the CATCF/POTC and other fandoms. These click to bigger. They're all mine. 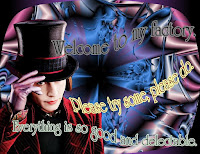 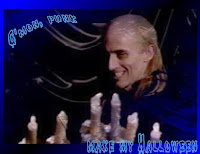 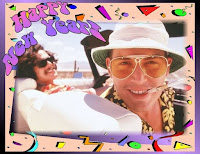 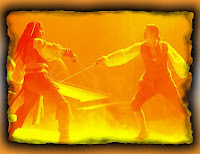 Before that was Xena. I wish we'd had youtube way back then, but this is cool.


And before that was Sliders. This year is the Sliders 20th anniversary.


And before I got on the internet I was doing Curry Toons. I have been a fandom smasher forever. These each click out to their series.

When I go deep into a fandom, I inhale everything about it off the internet. I am able to use this kind of distraction to get through the nastiest pain, the scariest dread, the saddest grief, the loneliest depressions, and I can take all the time in the world doing it. Before twitter, it helped me feel able to keep pace with the world in general, even when I felt like I couldn't very well be a part of it.


What's really important about fandoms is I've learned so much about social interaction over the years (I suck at it and suck at pretending I don't suck at it), and about myself interacting with other people (I'm always sorry I destroyed another friendship somehow). What's really important about Pinky blog is that I'm collecting up everything I've learned and integrating it into a whole psychologically healthy self now. No more masks and colliding with people. I'm real. I am the opposite of this.

Pinky Robot never went through the brainwashing of the lusticon like pop stars do. I'm not a created social media robot selling my soul so I can be famous. (That's a real thing.) I am creating myself.

Friends come and friends go. That's the law of social media. I don't like it. I think it stinks that our monitors allow us to take advantage of masking ourselves and pretending to be what we're not, even more than we do in real life, because the law of the jungle prevails. So when someone actually is a real person and being themselves, they eventually wind up being torn to shreds by strangers and then locking down into private. I've watched so many friends disappear into the lurker depths in every fandom I've surfed, and it all boils down to what they told us in nursing school- "Nurses eat their own." I've seen teachers comfort newbie fellow teachers sobbing online with the same thing- "Teachers eat their own." I think it's safe to say that in anything we master in our lives, our human reaction is to eat the inferior and weak. We are not a kind race of beings. Ergo- "Fandoms eat their own".

What really brought this to my own attention was finding out during my Aspergers diagnosis that I'm the one who's supposed to be awful and uncaring, ignorant of others' feelings and therefore likely to walk all over people like useful furniture, and yes, while that is true, I don't do it with guile. What I see, from my own point of view, is that the people who think they are 'normal' are generally the ones who insert that extra guile into the mix that makes 'faith in humanity restored' a joke. Sadly, tech monitors make this so easy to do, and we don't see the countless millions around the world weeping quietly all alone after they've felt shredded by someone they can't even really see and will likely never meet in person. It's hard placing our trust out there again when stuff like this happens. Developing and keeping solid online relationships has become a precious thing.

So. Last night. This convo immediately sent 50 views skidding to a post I'd never linked before. In a minute I'll tell you something else. 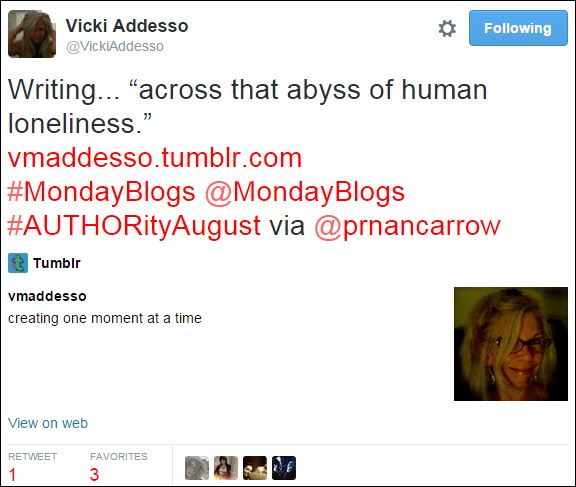 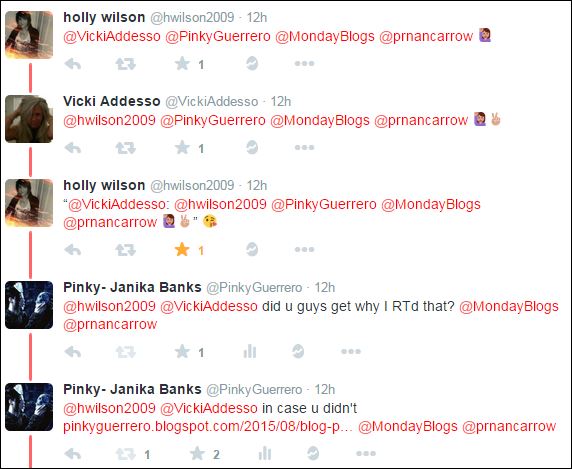 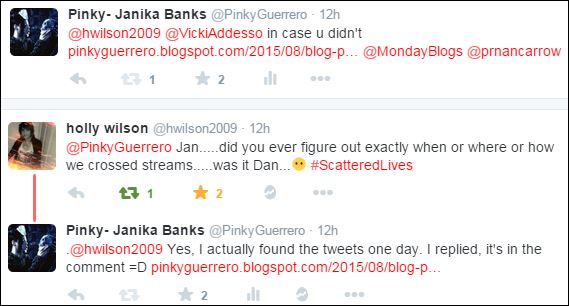 And what you guys didn't see after that is how many lurkers went on to view depression, suicide, and Pinky's revenge, and that continued through the night. That is the goal.

One little public convo between a group of friends who present as genuine people can be a really big deal. It's part of the bridge I'm building. All my friends are part of that bridge. I value every one of you, even if you think I don't notice or have forgotten you. I have an outrageously lengthy memory (even when it's glitchy), a penchant for hoarding details, a deep love of fans and fandoms, a sociology degree steeped in several human development fields, and a driving compulsion to share what I've learned about how to survive socially in an easy and fun way. Since I can't 'artist stuff' to save my life, it'll hafta be words. This is difficult to put into words, but as that post says, that's exactly why I'm back public, to build bridges with word construction. See if this makes sense-

My Pinky blog is a safe place. No comments means readers can't stalk each other. No one trailing around sucking up in public means no competition over me. (This has happened.) No 'likes' and 'favs' in the way and me still going on yapping means y'all are in my house with me, and we're comfortable with each other, sitting around munching and watching videos and thinking about stuff. No socially forced interaction based on politeness and masks. You can all be here at the same time and never even see each other, so it never gets awkward.

I know this got ridiculously long, and if you made it this far, bless your heart, I'm sure you're worn out. Wanted to say I appreciate what happened last night. I boinged awake at 2:30 this morning feeling really good seeing that, and I hope you guys feel really good being here, too.